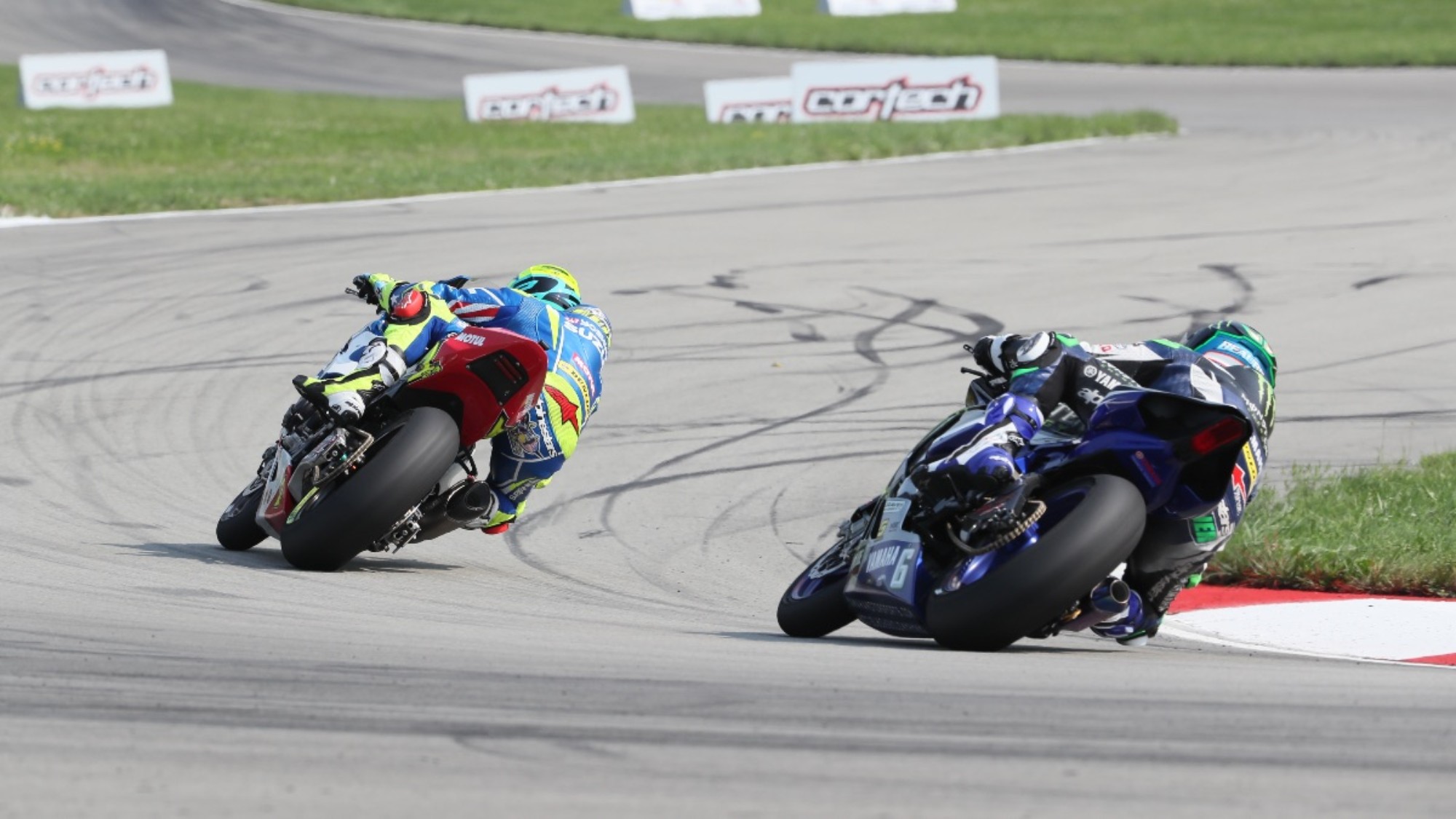 MotoAmerica Heads To Pittsburgh For Round Eight

COSTA MESA, CA (August 21, 2019) – And just like that, the 2019 MotoAmerica Series is headed into its final three races of the season with so much to play for as Pittsburgh International Race Complex beckons with the Championship of Pittsburgh, August 23-25.

This weekend’s race will mark the third time MotoAmerica has visited Pittsburgh International Race Complex, which is located some 45 miles from downtown Pittsburgh, and it’s already become a series favorite for riders, teams and fans.

Based on past history at PittRace, this one is wide open as no Superbike rider has yet to win twice on the twisty and undulating 2.78-mile racetrack in the green hills of Wampum. Beaubier won the first-ever MotoAmerica Superbike race at PittRace in 2017 but suffered a separated shoulder in race two with that race going to the now-retired Roger Hayden. In 2018, Josh Herrin won race one in iffy conditions with Elias winning race two. Four races, four different winners.

Looking at the season thus far, things become much clearer. And it really all comes down to just how fast and dominant Elias has been. The Spaniard has won six races so far, but his tally is blemished by two race crashes that have allowed the others to stay in the chase. Those crashes came in race two at Road America in June and two weeks ago in race two at Sonoma Raceway.

Going into Sunday’s second race at Sonoma, Elias looked to have both hands on the number-one plate as he lined up with a 59-point lead over Beaubier, who had crashed out of race one. Then race two happened. Elias crashed out, Beaubier won and now we have a title chase again.

Beaubier went into Sonoma as a four-time winner at the Northern California racetrack near his home, but he was fortunate that Elias followed his lead with a crash on Sunday – with Beaubier pulling away to his third race win of the season.

On Saturday, it was Gerloff who scored the victory, his second of the year and his second in a row. Gerloff followed that win with a second-place finish behind Beaubier on Sunday and his solid weekend at Sonoma combined with the other two both having DNFs puts the Texan in the title chase. He trails Elias by 40 points and Beaubier by just six.

Attack Performance Estenson Racing’s JD Beach was fourth and fifth in the two races at Sonoma and he’s fourth in the title chase, but well out of title contention with 107 points. Beach now has his hands full defending his position with Yoshimura Suzuki’s Josh Herrin fifth and just 11 points behind. Herrin crashed out of race one at Sonoma and rebounded to finish third in race two.

Westby Racing’s Mathew Scholtz put his Yamaha on the ground a few times during the Sonoma weekend, but not during the two races. For that he was rewarded with third in race one and fourth in race two. He’s just nine points behind Herrin and 18 ahead of M4 ECSTAR Suzuki’s Jake Lewis, with Lewis crashing in both races at Sonoma. He remounted to finish 11th in race two, but his streak of earning points in every round was broken.

Hagerty Omega Moto’s Cameron Petersen heads to Pittsburgh eighth in the title chase, just six points clear of ninth-placed David Anthony on the FLY Racing ADR Motorsports Kawasaki and seven points ahead of the ever-improving Scheibe Racing BMW of Jake Gagne, who rounds out the top 10 heading to PittRace.

M4 ECSTAR Suzuki’s Bobby Fong didn’t win a race at Sonoma Raceway, but he still came out of the event smelling like a rose with two second-place finishes in the Supersport class. Fong leads the title chase by 20 over Ricdiculous Racing’s Hayden Gillim, the Kentuckian having won five races (the most of anyone in the class), including race one at Sonoma.

New Yorker PJ Jacobsen rode his Celtic HSBK Racing Yamaha to victory in race two in Sonoma and he heads to PittRace third in the title chase and 36 points out of first place. Jacobsen will be racing at PittRace for the first time in his career.

Rocco Landers’ rivals would basically have to steal his Ninja400R.com/Norton Motorsports/Dr Farr for him not to earn the Liqui Moly Junior Cup Championship. The 14-year-old Oregonian is 76 points ahead of his nearest rival in the title chase and on the verge of capturing his first MotoAmerica title.

Second place in the title chase is held by Dallas Daniels, the flat tracker/road racer who didn’t compete in the Sonoma round due to his scheduling conflict with the two series. Daniels, who has a victory on his points tally, has also switched teams and will be aboard a Celtic HSBK Racing Yamaha at PittRace.

Altus Racing’s Kevin Olmedo took Daniels’ place as the thorn in Landers’ side at Sonoma, the El Salvadorian finishing second in both races and nearly beating Daniels in race one.

Franklin Armory/Graves Kawasaki’s Andrew Lee has won four of the seven Stock 1000 races this season and he will arrive in Pittsburgh with a 23-point lead over Mesa37’s Stefano Mesa. North Carolina’s Mesa has one win to his credit in 2019. Team Norris Racing’s Michael Gilbert, one of four riders to win a Stock 1000 race this year, is third in the title chase.

The closest championship points battle can be found in the Twins Cup class where the top three are separated by just two points. AP MotoArts’ Draik Beauchamp heads the list with 108 points, one better than Roadracing World Young Guns’ Alex Dumas and two better than Quarterley Racing’s Michael Barnes. Beauchamp rides a Yamaha FZ-07/MT-07, Dumas is on a Suzuki SV650 and Barnes competes on a Ducati Monster 797. For those not counting, that’s three different manufacturers in the top three.

This year’s MotoAmerica race at Pittsburgh International Race Complex will be the third year for the MotoAmerica Series at the 2.78-mile track. The track was built in 2014 and features eight left-hand corners and 11 right-handers.

Cameron Beaubier earned pole position for last year’s EBC Brakes Superbike race with a 1:39.937 set in Superpole. The best race lap was set by Toni Elias in race two, a 1:41.641 set while en route to victory.

Last year’s two Superbike races were won by Josh Herrin and Toni Elias. Herrin won on an Attack Performance/Herrin Compound Yamaha with Elias riding his Yoshimura Suzuki to victory. This year the two are teammates on the Yoshimura Suzuki team.

Beaubier’s win in race two at Sonoma Raceway was the three-time MotoAmerica Superbike Champion’s 35th career AMA Superbike win. That puts Beaubier third on the all-time win list. Toni Elias, meanwhile, has 31 wins to his credit and is just one win away from moving into a tie with Miguel Duhamel for fourth on the all-time list.

The winningest rider in the 2018 MotoAmerica Series is also the youngest winner – Rocco Landers.The 14-year-old Landers has won nine Liqui Moly Junior Cup races and has already amassed 250 points. The other two winners in the series are Cameron Jones (1) and Dallas Daniels (1).

Valentin Debise and JD Beach won the two Supersport races at PittRace last year with Alex Dumas sweeping to both victories in the Liqui Moly Junior Cup. The Twins Cup race was won by Jason Madama with Andrew Lee taking victory in the Stock 1000 race.

In his three MotoAmerica Superbike Championship winning seasons, Cameron Beaubier won eight races in each of those years (2015, 2016, 2018). With three rounds and six races to go, Beaubier has three wins.

In Toni Elias’ championship winning season of 2017, the Spaniard won 10 races. With three rounds and six races to go, Elias has six wins. Josh Hayes won 10 races in the first season of MotoAmerica in 2015 but lost the title to Beaubier and his eight wins.