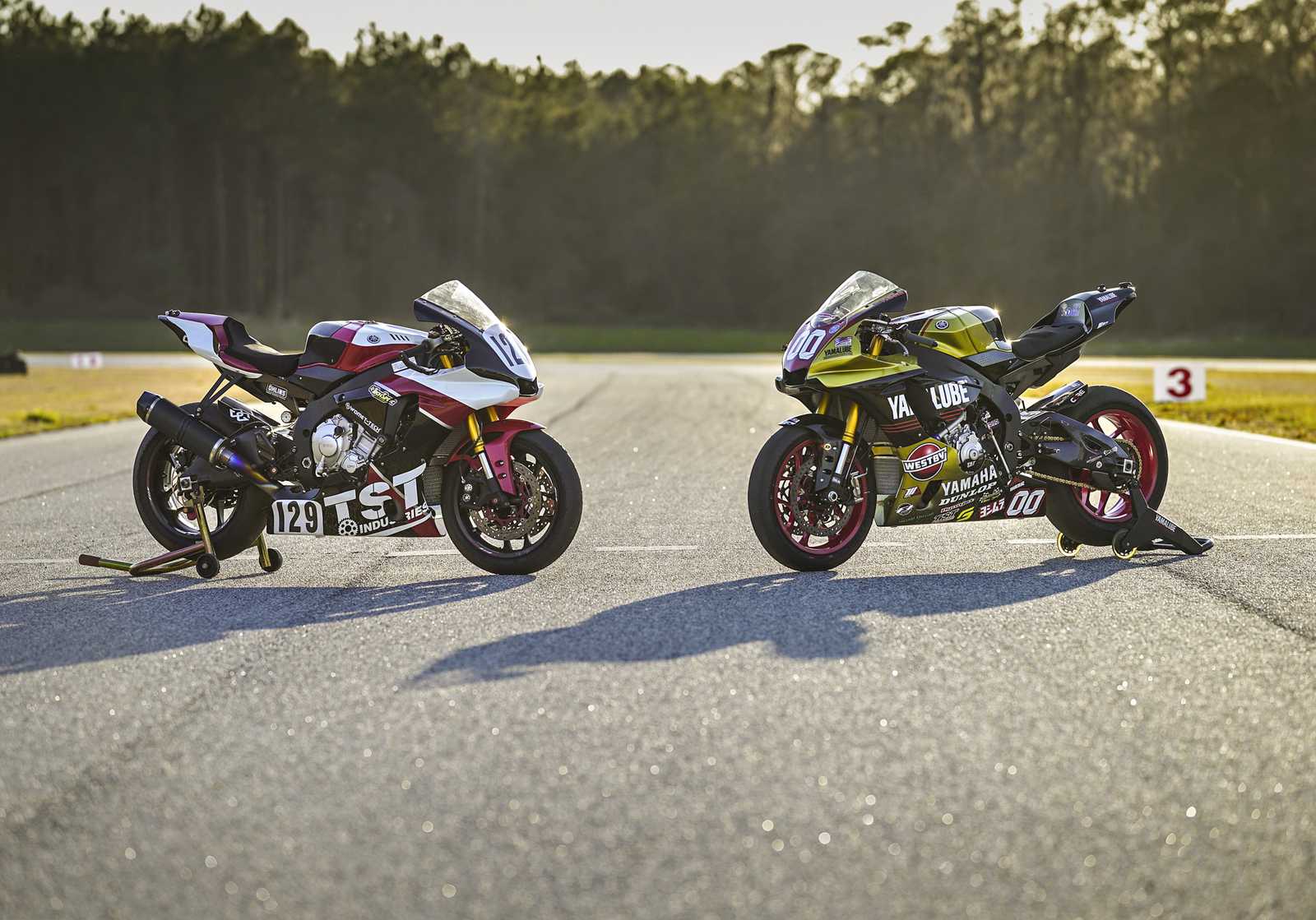 TST Industries, LLC, designs, manufactures, markets, sells, and ships unique parts and accessories for a complete range of motorcycles, with a specific focus on sportbikes. Founded in 2007 by company owner Bart Rogowski, TST Industries sells its products directly through its Website at https://tstindustries.com

“We’re really happy to have Bart and TST Industries join the Yamalube/Westby Racing family,” commented Tryg. “As a sportbike rider myself, I really like their products. They’re well-made, and TST has a great reputation in the industry. I’m proud to have them closely aligned with Yamalube/Westby Racing.”

Team manager Chuck Giacchetto added, “From fender eliminator kits, to turn signals and taillights, to innovative electrical components, all of TST Industries products are cool-looking, fit right, and made to last. We’re so glad to have a quality company like TST Industries as part of our Yamalube/Westby Racing team.”

Bart Rogowski, owner of TST Industries, remarked, “Being a longtime trackday rider and club racer, I’m thrilled to sponsor Yamalube/Westby Racing. The 2016 season marks the start of a whole new era for our brand as we expand into the racing community. We look forward to leveraging our product development and sourcing experience to help Yamalube/Westby Racing continue their remarkable success.”

TST Industries Chief Innovation Officer Steven Fox also noted, “The members of Yamalube/Westby Racing are true professionals, and we’re excited to work with them. This partnership will add a new dimension to our business and act as a motivational catalyst for our engineering and retail team.”

Yamalube/Westby Racing will participate in the Official MotoAmerica Preseason Test at the Circuit of The Americas (COTA), which will take place on Wednesday, March 23, and Thursday, March 24 from 10 AM to 5 PM each day. The Test is open to the public, with free admission provided by Dunlop Tires. The MotoAmerica road racing season will begin at COTA on April 9-10.

More, from a  press release issued by Unit Media on behalf of MPH Racing:

Mr. Assanti started bike911.com to 1) help victims of motorcycle, bicycle, and motor vehicle accidents and 2) assist professional racers and organizations in the motorcycle industry by protecting their best interests.

Assanti and his team have decades of experience handling personal injury cases and providing legal services to professional racers. At A.G. Assanti and Associates, P.C., you will receive the personal attention you deserve from a legal team that truly understands your situation and the challenges you face.

A prominent attorney in the Orange County area, Assanti not only specializes in helping motorcyclists but many other types of attorney services. Those services include: civil litigation, personal injury, product liability, criminal law, and family law to name a few.

Over the past 20 years, A.G. Assanti and Associates, P.C. has been responsible for over tens of millions of dollars in recoveries while serving Orange County and clients throughout California. On the motorcycle road racing side of things, Assanti and Associates represent several former and current AMA Pro Racing riders.

After inking the deal with bike911.com Paris said, “I’m really excited to be working with Bike911. As both a motorcycle racer and avid cyclist, I know the importance of a law firm that specializes helping our communities. Having gotten to know Alessandro both on and off the track over the years, it’s really awesome to have his support as I go into the 2016 race season. I look forward to working hard to help promote Bike911!”

Look for the famous bike911.com sticker on Melissa’s helmet during the season.

For more on Alessandro Assanti, see assantilaw.com or go to Bike911.com

About Melissa Paris: Melissa Paris is a Northern California native who has been racing motorcycles professionally since 2009. Her palmarès include a team victory in the 2015 24 Hours of Barcelona, an eighth place finish at the 2015 MotoAmerica Road America round of the Supersport Championship and finishing career best ninth in the coveted Daytona 200. You can find Melissa on Facebook at www.facebook.com/MelissaParis13, on Twitter @Meligirl13 and on Instagram @melissaparis13.

More, from a press release issued by Pata Yamaha:

With an almost 40 year history in the branding solutions industry, CGI is the ideal partner to manufacture and apply the full Pata Yamaha livery across the team’s extensive requirements for the 2016 season. Responsible for branding the garage displays, race trucks and hospitality facility alongside numerous decal and graphic solutions, CGI provides comprehensive support across all areas of the production and installation process. From the riders’ race numbers on the YZF-R1s to a full graphic wrap of the 12m trailers, CGI provides the Crescent-run Yamaha team with first-class presentation to equal its world championship aspirations.

Based in the United Kingdom and South Africa, CGI operates on a truly global level with clients in 26 countries and covering five continents. Focusing on the automotive, aerospace and leisure markets, CGI’s partnership with Pata Yamaha fits perfectly with its already established outlook and the MOTUL FIM Superbike World Championship’s global commercial reach.

CGI’s visual identity was seen on track for the first time as part of the 2016 Pata Yamaha Official WorldSBK livery at Phillip Island, in Australia, last week when Alex Lowes and Sylvain Guintoli took part in the first race of the year on Saturday 27th February. The season continues next weekend as the championship travels to Thailand for round two, commencing on Friday 11th March.

“CGI are delighted to be working with the Pata Yamaha Official WorldSBK Team for the 2016 World Superbike season. The profile of the team and its race calendar sit perfectly with our aspiration to further expand our global footprint. Our heritage is built within the automotive sector with long-standing relationships with Ford, Toyota and General Motors and the addition of the Pata Yamaha Official WorldSBK Team to this portfolio is an exciting project.”

“When our existing graphics partner Sign Language became part of the Creative Graphics International group and Crescent began its WorldSBK partnership with Yamaha towards the end of 2015, there was a lot of change underway for both companies. The team – and Yamaha Motor Europe – are delighted to have secured an agreement with Tobin, Mel and the team at CGI to work together, with a focus on promoting CGI’s wide-reaching global resource and capabilities, developing new business opportunities together and of course for CGI to help the Pata Yamaha Official WorldSBK team to be the best presented team in the WorldSBK Championship – from on-bike decals to complete hospitality livery consultancy, production and application.”

More, from a press release issued by DanOrtegaRacing.com:

DanOrtegaRacing.com and Super C Racing are proud to announce that they are teaming up with Dunlop Tires.

Chicago, IL: For the 2016 racing season Dan Ortega and Carl Soltisz are excited to announce that they will be exclusively using Dunlop racing tires. For ASRA Team Challenge events the entity will be known as Pool Boy Racing (PBR).

“I’m really excited to get back on Dunlops,” said Dan Ortega. “It just makes sense for us to not have to switch tires between MotoAmerica and club race rounds. Not to mention, I’ve always gone really good on Dunlops. I set the 600cc record at Blackhawk Farms back in 2009 on Dunlops. That has since been broken but I held it for a number of years”

Carl Soltisz stated, “I’m thrilled to be jumping on board with Dunlop for the 2016 race season! I’ve had a number of chances to compete on Dunlops at past MotoAmerica rounds and I was always really impressed their performance. Last season I earned my first top 5 finish in a MotoAmerica Superstock 600 race on Dunlops and I’m eager to improve on that finish in 2016. This is a fantastic opportunity and I’m confident the Dunlop tires will allow us to bring home many wins this year.”

Dan Ortega and Carl Soltisz are two of the local favorites to run up front at the regional level and compete in the professional MotoAmerica series at select MotoAmerica rounds in 2016.