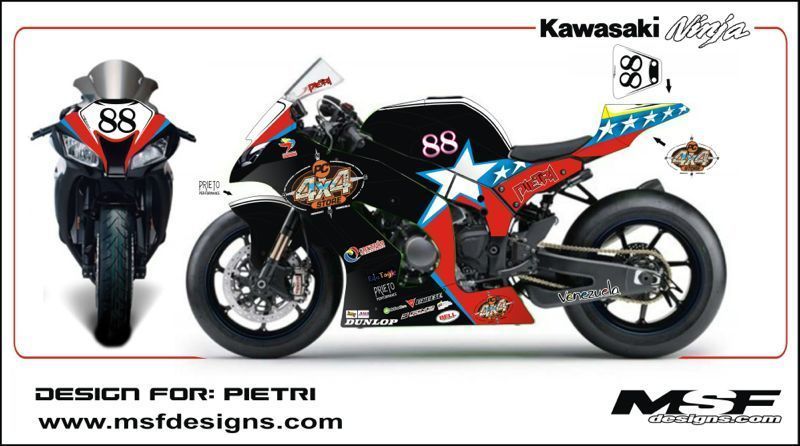 ROBERTINO PIETRI READY FOR DAYTONA It has often been said that some people are born to race. Such is the case with top-ranked AMA Pro National Guard Superbike competitor Robertino Pietri. Showing his determination, finesse and skill on two wheels from the very beginning, Pietri has established himself as a major standout talent in today’s racing world. Showcasing an all new team, new sponsors, a new crew and a new motorcycle, Pietri will debut the TeamMotoVenezuela PC4x4 Store by Prieto Performance ZX10R at this year’s AMA Pro National Guard Superbike season opener at Daytona International Speedway, March 14 -16. The premier class in AMA Pro Racing, the National Guard Superbike class showcases the fastest, most experienced riders in country going head-to-head in a battle for victory. It is fast and unbelievably exciting. Wrestling heavy machines around corners, leaning over at impossible angles, riders rocket down the straights hitting speeds up to 200 mph, sometimes so close that they trade the paint off their fairings. It is two-wheeled racing at its very best. “We are really excited,” says Pietri with a big smile. “We tested a couple of weeks ago and it was sweet. Eric Gray built us two great machines and our crew chief James Lickwar and our project manager Sean Prieto have them really dialed in. I couldn’t be more pleased and we are definitely good to go for Daytona.” A second generation racer, Pietri was born and raised in Venezuela. Learning to ride at the age of five, Pietri actually began his racing career in motocross, running his first race when he was just six years old. “My Dad raced Superbikes before I was born,” explains Pietri. “While I never got to see him compete, I grew up hearing about his racing career and following in his footsteps just seemed the natural thing to do. He has helped me so much and I have learned a lot from him. I wouldn’t be able to do what I do without his help. In fact, my whole family is behind me and that is very important. We are a very close family and I spend as much time with them as I can.” Switching from motocross to pavement when he was 14, Pietri turned pro in 2004 and since then, he has raced all over the world earning numerous victories, championships and accolades along the way. “This season our plan is to run selected AMA Pro events and compete in the Spanish CEV Championship,” says Pietri. “We will run under TeamMotoVenezuela PC4x4 Store by Prieto Performance in America and we will be racing for Team Laglisse in the CEV Championship. I am definitely excited about the upcoming season and think we will have a good run in both series.” Extremely competitive and determined, Pietri’s athletic ability is obvious. In fact, he played both tennis and racquetball for a number of years when he was growing up and was a member of the National Racquetball Team in Venezuela. If not on a motorcycle or playing racquetball, he could be found on the water wakeboarding or water skiing. Another one of his passions is riding bicycles. “I love bicycle riding, both mountain bikes and road bikes,” he says with obvious enthusiasm. “It is great training and really helps me get my head in gear. Training is all important when it comes to racing. If you want to be at the top of your game, you need to be extremely fit. I ride bikes, I work out, I swim and I pay strict attention to my diet. I am in good shape and that is all important in providing that extra edge that often makes the difference between winning and losing.” In addition to PC4x4 Store, Pietri is sponsored by Gobierno Boliivariano de Venezela, Ministerio Popular Para el Deporte, Bell Helmets, TCX Boots, Dainese Leathers and Five Gloves.