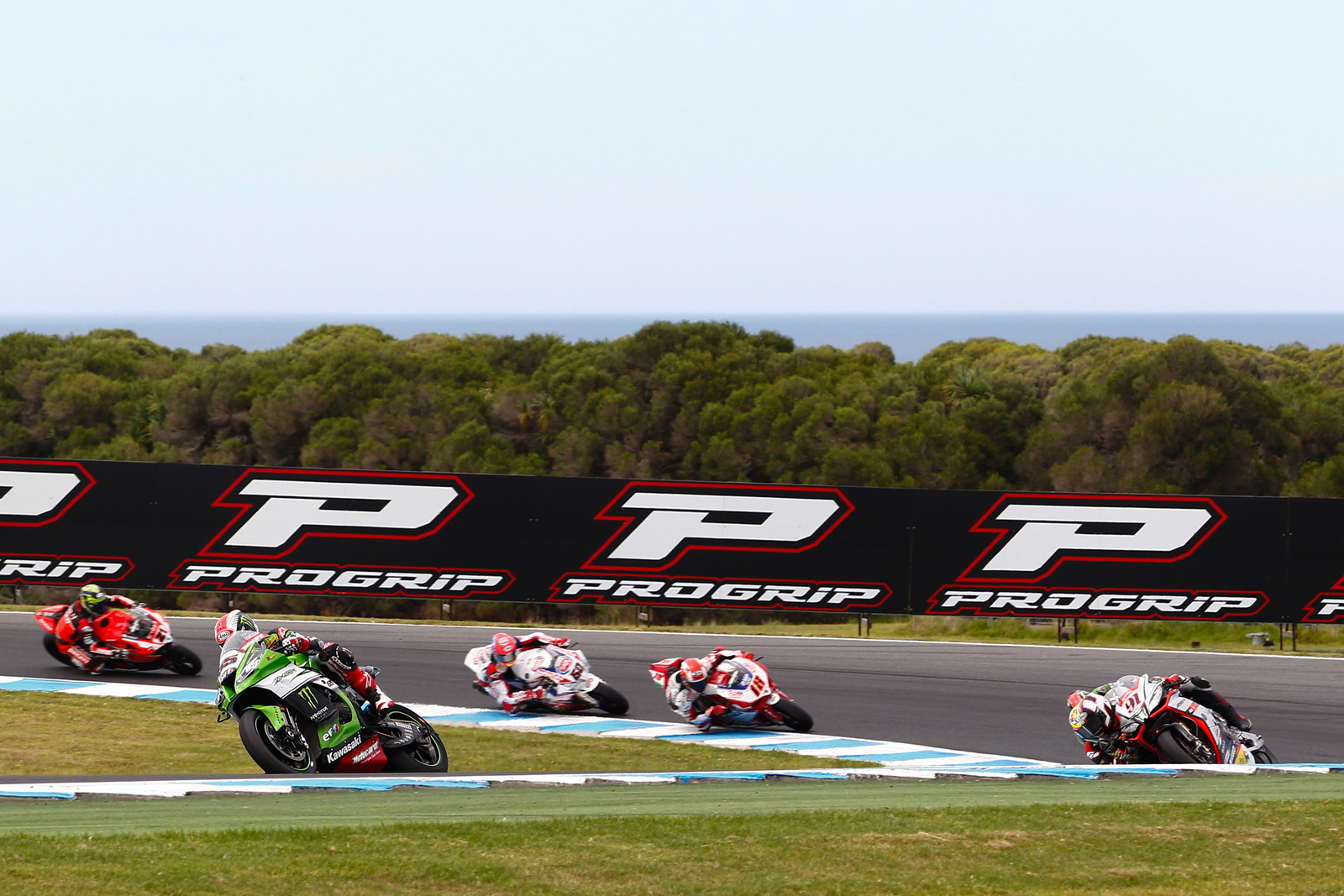 Great start for Pirelli in the first round of the eni FIM Superbike World Championship; Rea on Kawasaki and Haslam on Aprilia take one win each, a double for MV Agusta in Supersport

Cowes (Australia), February 23, 2015 – Pirelli is very satisfied with the results obtained in the first round of the eni FIM Superbike World Championship where races were held today on the Phillip Island track.

The Australian circuit is historically very demanding and puts the tires through the mill and for this reason, it is much feared by all tire manufacturers.

This year Pirelli has demonstrated its significant mastery of technology, thanks to the constant development work it has been carrying out in the last twelve years in the top Championship for factory derivative motorcycles.

Pirelli’s goal has always been to build tires that can fit well on any motorcycle brand because, unlike other championships, the tires used in Superbike are not prototypes but tires that are regularly sold on the market and affordable for all motorcyclists, therefore they must be able to work well with all motorcycles on the market. For the Milanese company, the Superbike World Championship is the most important development laboratory for its tires and the riders in this Championship are the best possible testers to assess the actual quality of a tire.

Podiums like those at Phillip Island, which saw the triumph of three riders from three different motorcycle manufacturers (Kawasaki, Honda, Ducati), are the clearest demonstration that the development activities carried out over the years by Pirelli are going in the right direction.

Pirelli has not only given the riders two smooth races, but also the opportunity to give all the fans the excitement of spectacular duels during the race. This was made possible thanks to the excellent performance guaranteed by the tires.

In Race 1 Kawasaki Superbike Team rider Jonathan Rea, after taking pole position on Saturday, made a good start, managing to hold onto the lead for eleven laps until Leon Haslam (Aprilia Racing Team – Red Devils) managed to overtake him at the beginning of the twelfth lap. Nevertheless, in the fourteenth lap, the standard bearer for the manufacturer from Noale went too long out on a turn, managing to save it, but re-entering the track only in fourth place, returning the first place to Rea who, in the second half of the race, had to defend his position from the continuous attacks of Chaz Davies (Aruba.it Ducati SBK Racing-Team). Behind them, in third place, was the excellent rider Jordi Torres (Aprilia Racing Team – Red Devils), making his debut in the World factory derivative Championship.

In the last five laps a lead pack was formed led by Rea, followed by Davies, Haslam and Torres, the only ones to lap under 1:32′. In the nineteenth lap Leon Haslam got past Chaz Davies to move into second place but the Welsh fought back to retake the position. In the last two rounds there was a three-way battle between Rea, Haslam and Davies for the lead. After a last lap anthology with a thrilling Rea-Haslam duel, in the end the Northern Irish rider got the better of the first Aprilia rider and crossed the finish line first. Behind them Ducati rider Chaz Davies took third.

In Race 2 there was another three-way battle between Rea, Haslam and Davies. The Kawasaki rider held the lead firmly followed by Davies and Haslam. At the beginning of the sixth lap Haslam overtook Davies who, after a few turns, was also forced to give way to Michael VD Mark (PATA Honda World Superbike Team), who was making his debut in the top class after his triumph last year in Supersport. In Race 1 the Dutchman had finished with a good fifth place but, not satisfied with this, shortly afterward he even took the first position from Rea who was also overtaken by Haslam and Davies, thus dropping down in fourth position. In the twelfth lap the Dutchman lost a bit of pace and the pursuers took advantage. Haslam took the championship lead, followed closely by Rea and Davies. In the seventeenth lap the race lost one of the key players of the weekend, Jordi Torres, to a crash. Meanwhile, one lap later, Rea overtook Haslam who, nevertheless, in a few switchbacks regained the lead only to lose it again on the last lap in to the Aprilia rider.

Climactic ending: on the finish straight Haslam was faster and crossed the finish line just ten thousandths of a second ahead of Rea who had to settle for second place. Chaz Davies put in a good performance, confirming the result obtained in Race 1.

In Supersport, Jules Cluzel (MV Agusta Reparto Corse) started from pole position ahead of Kenan Sofuoglu (Kawasaki Puccetti Racing) and his teammate Lorenzo Zanetti. The Frenchman immediately set the pace, while hesitation by the Turkish rider gave Ratthapark Wilairot (CORE” Motorsport Thailand) a chance to slip into second place. On lap five the Thai rider lost a position to Zanetti while Kenan Sofuoglu went wide on the first turn after a battle with Kyle Smith (PATA Honda World Supersport Team), leaving the track, returning in only eighteenth place and thus compromising his race.

While the riders from the Schiranna company led by Cluzel created a gap behind them, there was a fight for third place. After the race the podium was bathed in MV Agusta colours, with the manufacturer placing both its riders on the top two steps. Behind them, after a fierce duel with Kyle Smith, Gino Rea (CIA Landlords Insurance Honda) was in third position.

“We are very satisfied with the results this year and the performance of our tires. The most important thing for us is that year after year we can always improve and make a small step in the right direction. For us this is a very positive sign. We know that Phillip Island is a difficult circuit for the tires and for all tire manufacturers, but today I can say that the work done over the years has borne fruit. There is certainly still room for improvement but the technological level is definitely already considerable, as demonstrated by the great races that we have seen. My congratulations to Jonathan, Leon and Chaz for the fantastic duels they gave us but I also want to express my appreciation for Troy Bayliss who wanted to get back into the game after seven years of inactivity, well aware that it would not be easy, and, as the great professional rider that he is, he did his job down to the last turn, giving the fans an exciting show, no matter what the final result was.”

The Pirelli solutions chosen by the riders:

For the first round of the 2015 Superbike championship riders could choose from four rear development solutions given the peculiarities of the track.

In both races the rear solution most used was the development SC1 T1105. The riders who did not choose this solution opted for the S1867.

On the front 2/3 of the riders chose the development SC1 S1699, the most used front solution during last season. The second choice was the standard SC2.

In the Supersport World Championship where grooved DIABLO™ Supercorsa SC tires are used, for the rear all the riders chose the development SC1 (T1538), the solution in 190/60 size which proved to be the best for the typical features of the Australian circuit. On the front the standard SC1 was preferred by 70% of the riders, with the rest choosing the development SC1 instead.

The “Pirelli Best Lap Award” is awarded by Pirelli to the rider who sets the fastest race lap. This recognition is presented by a Pirelli representative during the Paddock Show in a press conference which follows the podium at the end of the races, for a total of three awards each weekend.

The Superbike and Supersport rider who has earned the most “Pirelli Best Lap Award” titles at the end of the season will be elected “Best Lap Winner: fastest rider of the year” and awarded in the usual end of year ceremony.

These are the riders who won the Pirelli Best Lap Awards in the first round of the season:

The 2015 Pirelli statistics for the Phillip Island round:

• Number of solutions (dry, intermediate and wet) for the Superbike class: 5 front and 7 rear

• Number of tires available for each Superbike rider: 32 front and 40 rear

• Number of solutions for the Supersport class (dry, intermediate and wet): 4 front and 4 rear

• Number of tires available for each Supersport rider: 22 front and 24 rear