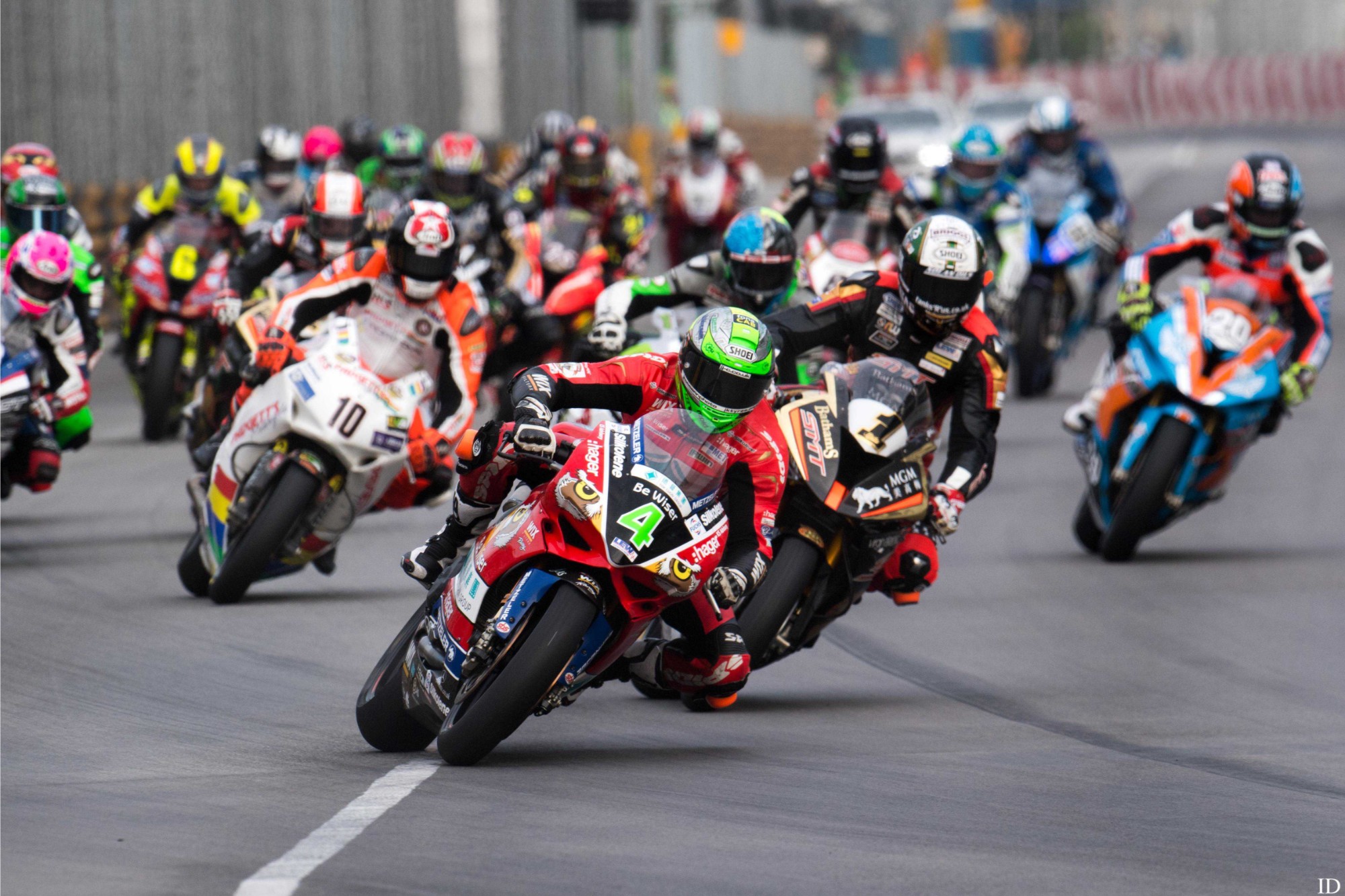 The pair of them left the line side by side and Irwin led all the way through the first turn, but Hickman won the drag-race to Lisboa and the braking competition when the two of them arrived there more or less side by side and already pulling ahead of Martin Jessopp (Riders Motorcycles BMW).

But as they came to the end of the opening lap, Irwin slid the Ducati up the inside of the right-hander to take back a lead he would never lose, though he could not shake off the determined Hickman either, always about a second behind him everywhere they went.

Before the race got underway, Irwin had climbed off his motorcycle at the end of the warm-up lap and looked into the engine, identifying what he later called a “serious mechanical issue”, which meant he was pretty sure it would not last the full 12 laps.

He was still leading after six laps, with Rutter slotting into third on the second of the SMT/Bathams by MGM Macau BMW’s but unable to catch Hickman or break free of Jessopp.

With the scene set for a classic battle, the race was stopped after six laps by red flags following a serious incident at Fishermen’s Bend. The result declared in Irwin’s favour with a 1.3 second margin to record the first win for a Northern Ireland rider since Phillip McCallen in 1996.

The race was immediately stopped and Daniel was transferred to hospital. It is with great regret that we have to announce that the British rider succumbed to his injuries en route to the Conde S. Januario Hospital.

Daniel’s family and team have been contacted, and the Committee will ensure every assistance is extended to them.

The Macau Grand Prix Organizing Committee extends its deepest sympathies to the family and friends of Daniel.

The 27 year old from Carrickfergus in County Antrim was leading double winner Peter Hickman by over a second on the factory-supported and Metzeler-shod Be Wiser TAK CHUN Racing by PBM/Penz13 Ducati Panigale R when the race was stopped prematurely.

The organisers later declared a result and held a sombre podium ceremony prior to announcing that English rider Dan Hegarty had sustained fatal injuries in the accident.

Glenn Irwin: “I appreciate all the congratulations, but the result is irrelevant, and all our thoughts are with Dan’s team and family at this very sad time. As far as the race is concerned, I had a non-mechanical technical issue which nearly caused me to pull in on the opening lap, but I adjusted my style and it worked OK. It’s a very sad end to what has been a successful week.”

The result saw Irwin become the first Ulsterman in 21 years to take a win around the Far East track and it was Ducati’s first victory there since 2010. It also added to Irwin’s North West 200 Superbike race victory and maiden BSB win this season and was PBM’s fourth Macau Grand Prix victory.