CSRA Vintage Superbikes revisit Buttonwillow with the AFM for round 2

Cooler temperatures greeted the competitors for the latest installment of CSRA Saturday Superbike Shootout which runs in conjunction with AFM events. The thermometer in Californian’s Central Valley might have read a bit lower than round 1, but the race action was still hot as ever.

As the green flag fell the ever fast-starting Terry “The Colonel” Cheney (Hon) lead the charge into turn one with Mark “Birdman” McKinney (Suz), Kevin McKee (Kaw), and the rest of the field following closely. The battle for the lead got even closer when McKinney made his move on Cheney as they headed up the “Grapevine” on lap one causing Cheney to miss a shift as McKinney went for the pass. McKinney got “high, wide, and handsome” running out of real estate and into the dirt on the exit for what was no doubt a tense few moments. McKee in third took advantage of his fellow combatants’ simultaneous misfortune to rocket into the lead heading towards the bus stop.

The action continued its torrid pace through lap one with McKinney taking a shot on the outside of Cheney through Riverside and was finally able to overtake Cheney in the braking zone making it stick into the sweeper before the run up through the esses. At the end of lap one McKee on his ex-Bob Sherwood Kawasaki Z1 warhorse “Jethro” was taking over at the front and trying to set sail and settle the issue early.

With the leaders in sight, Darrin Gauvin making a guest appearance on the ex-Bernd Koegler Racing Honda CB750F had his hands full with CJ Bonura’s JES Built Honda 900F, Anthony Guarderas (Suz), and Mike Butler on his Rick Oats-tuned Suzuki as the field started to settle in.

As the laps continued to wind down, the order throughout the field had pretty much sorted itself out and positions stabilized. It was McKee, McKinney, Cheney, Gauvin across the checkered flag without positions in doubt. There was one more battle yet to be decided, when coming into the final turn, Bonura lost a bit of pace with the rookie Butler closing in on his heels and Guarderas looking for the spoils if things didn’t work out. As they straightened up out of the final corner for the run to the finish, Bonura was showing his beast the whip all the way to the line. Butler had different ideas he made the pass at the line for 5th place overall and top Novice. Butler seems intent on letting his fellow competitors know he is not satisfied fighting for middle of the pack positions and plans to be at the sharp end of the field in short order. Onlookers continue to remark on how quickly Butler has gotten up to speed and think he is one to keep an eye on. Guarderas and Andrew Gray (Guzzi) rounded out the field with Gray unable to make the green flag as his booming V-twin Moto-Guzzi lost its bellow on the warmup lap. Paul “Kelly Leake” Kieffer (Suz) had a DNS as his disappointing season continues, maybe Oats can sprinkle some magic his direction next round. Hellfritsch (Kaw) DNS with a Friday afternoon withdrawal as social media showed cam issues.

We are half way through the shortened four-race season as the series moves up the coast to Thunderhill for Round 3 Sept. 19th-20th before the final round at Laguna Oct. 23rd-25th with MotoAmerica. Please keep an eye out for information or stay up to date by following us at www.csra.us or on [email protected] Superbike Racing Association 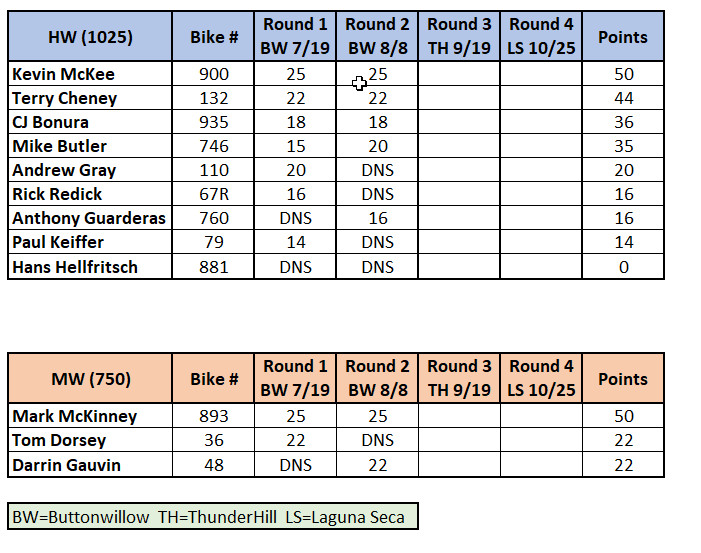 British Superbike: Race One Report And Results From Oulton Park