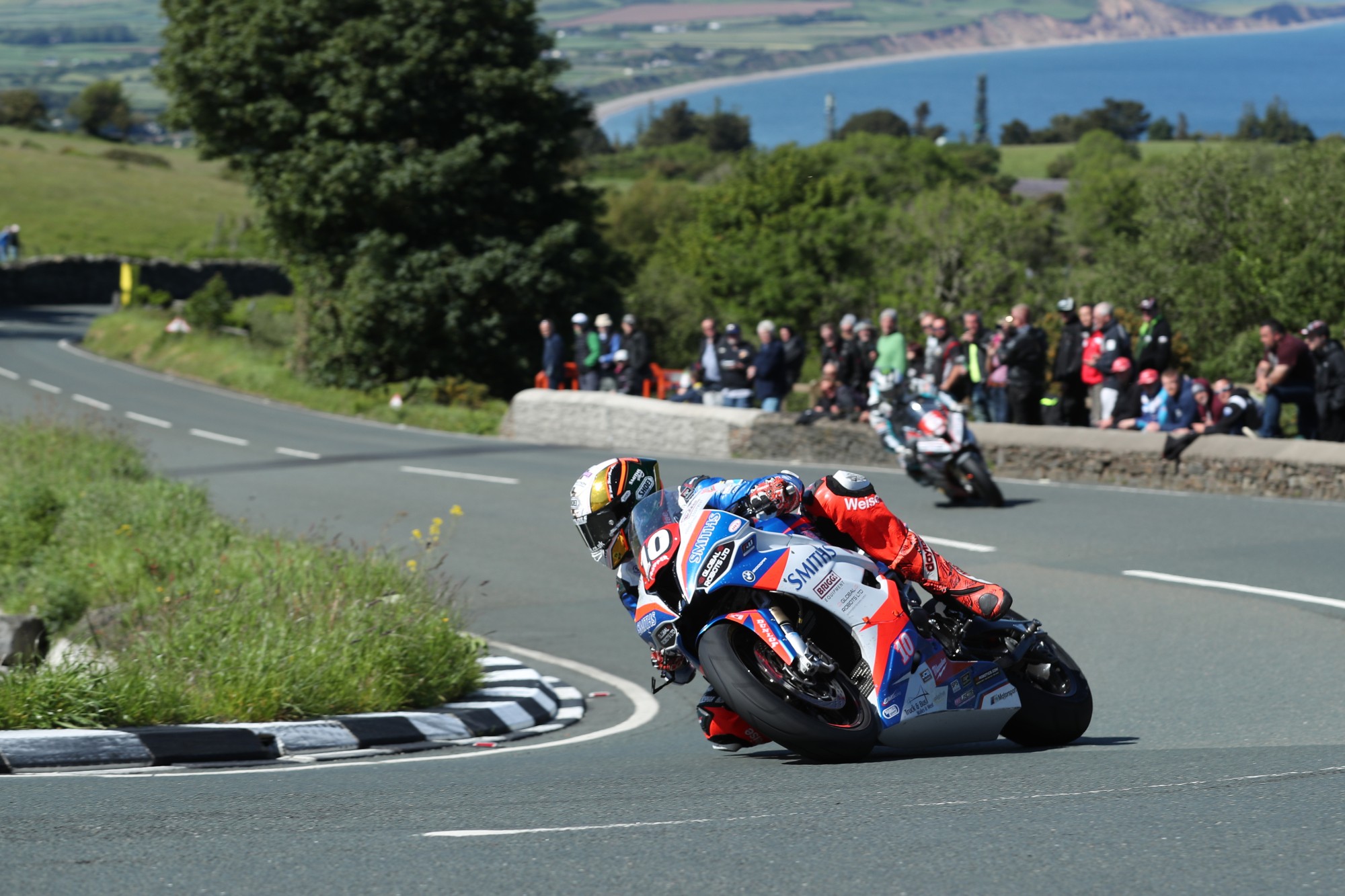 Peter Hickman joined a select group of riders to win two races in a day at the Isle of Man TT Races, fuelled by Monster Energy, when he dominated the RL360 Superstock race to win by 26.045s from Dean Harrison (Silicone Engineering Kawasaki).

The Smiths Racing BMW rider followed up his Monster Energy Supersport success from earlier in the day to take his fifth TT victory – and his third of the week – with David Johnson (Honda Racing) achieving his maiden TT podium in third as he got the better of Michael Dunlop on the final lap by just 0.208s.

A superb first sector saw Hickman lead through Glen Helen on the opening lap, – 1.68s ahead of Harrison with James Hillier a similar distance back in third. Dunlop slotted into fourth ahead of Michael Rutter and Davey Todd who was having a storming ride in sixth.

Hickman increased his lead by a further seven tenths of a second at Ballaugh, while Dunlop moved ahead of Hillier for third. At Ramsey Hairpin the Burton upon Trent rider’s advantage had grown to 3.978s. Harrison was now almost five seconds clear of Dunlop with Hillier, Conor Cummins and Johnson occupying fourth to sixth positions.

A brilliant run over the Mountain and an opening lap of 132.02mph gave Hickman a 9.026s lead over Harrison as the riders all made their mandatory pit stop. Dunlop was just over four seconds behind Harrison but 6.7s ahead of Hillier although the Kawasaki rider picked up a 30s pit lane speeding penalty which dropped him down the order. Johnson was now in fifth having overhauled Cummins.

Hickman’s lead at Glen Helen had come down to 5.8s as Harrison made his bid to close the gap and it looked like it was now a two-horse race with Dunlop over eleven seconds in arrears in third. Johnson had moved up to fourth, courtesy of a superb pit stop, from Cummins and Rutter as Hillier went through in ninth.

As the lap unfolded, Hickman began to reassert his authority back on the race once more and the lead was up to nine seconds at Ramsey with Dunlop having lost a further three seconds on the west part of the circuit. Indeed, he was now coming under pressure from a charging Johnson on the Honda Racing machine.

Hickman’s second lap speed of 128.13mph gave him a healthy lead of 16.576s over Harrison as he headed into his third and final lap of the 37.73-mile course. Dunlop was now only 3.2s ahead of Johnson as Cummins and Rutter slotted into fifth and sixth. Hillier had fought his way back up to seventh.

At Glen Helen third time around, Hickman had extended his advantage over Harrison to 18.078s but Johnson had now moved up to third at the expense of Dunlop, although the gap between the pairing was only 0.784s.. Cummins and Rutter remained in fifth and sixth respectively but the battle for third was getting closer with Dunlop having closed to within 0.114s at Ballaugh.

Throughout the final lap, Hickman continually pressed home his advantage and with a final lap speed of 131.38mph, he took the chequered flag by 26.045s to move on to a career total of five TT wins.

Harrison took his second runner-up spot of the day, and third of the week, with Johnson getting the better of Dunlop for third by 0.208s as he overhauled the Ulsterman in the final sector. Cummins and Rutter took fifth and sixth with Hillier, Todd, Jamie Coward and Gary Johnson completing the top ten.

Dean Osborne was reported to be unhurt after coming off at Appledene.

More, from a press release issued by Smiths Racing BMW:

The Gloucester-based Smiths Racing team and Lincolnshire rider Peter Hickman enjoyed a superb Peter Hickmanday of racing at the Isle of Man TT races today with the 32 year old joining a select band of riders to win two races in a day around the 37.73-mile Mountain Course as he took victory in both the Monster Energy Supersport race two and the Royal London 360 Superstock races.

Having originally been scheduled for 10.45am yesterday, the Supersport race, cut from four laps to two, eventually got underway at 12.55pm today and with dry conditions all around the Mountain Course, a superb opening lap of 127.21mph saw Hickman grab the lead on the 675cc Trooper Beer by Smiths Racing Triumph.

Just like last year’s Senior TT race, it turned into a head to head battle between Hickman and Dean Harrison and half way round the second and final lap, the duo were split by just 0.3s meaning it was all going to come down to the final run over the Mountain.

Going through Ramsey, the difference between Hickman and Harrison was the same but utilising his strength over the Mountain, Hicky was able to edge away and, aided by the fastest lap of the race at 128.14mph, he took the win by just over three seconds to record his fourth TT win in total and his first in the Supersport category, adding to Monday’s Superbike win also.

Two hours later, Peter was back in action on the Smiths BMW S1000RR for the three-lap Superstock race and the Waddington-based rider stamped his authority on the race right from the word go, his lead over Harrison already close to two seconds at Glen Helen on the opening lap.

With the fastest lap of the race of 132.025mph, Hickman led by nine seconds at the end of the first lap and although Harrison brought that down marginally at Glen Helen second time around, that was as close as it got. From then on, Peter extended his advantage over his Kawasaki rival and he eventually took the chequered flag some 26 seconds clear to secure his second TT win of the day, the third of the week and his fifth in total.

Peter Hickman: “The morning’s practice lap helped me for the Supersport race and rather than having a slow first sector, it was the opposite on this occasion and seeing ‘P1’ on my first pit board was a pretty nice feeling! There was never much between us and to lap at 128mph given the fact I’d only had four laps on the bike today is pretty good but to get the win is even better. The input we’ve had this year from Triumph has certainly helped and having come close a few times before, it’s great to have finally won a Supersport TT race. With regards to the Superstock bike, everything’s just clicked this year and it was nice to have a TT race where I had a decent lead and could enjoy it properly rather than having to bite the screen on the last lap! It wasn’t easy, a TT race never is, but I felt comfortable on the bike and it worked perfectly throughout the three laps. The team have done a great job all week and to be sitting here now with my third win of the week feels pretty special.”

Darren Jones, Team Co-ordinator: “Two wins in a day and three in a week feels pretty special. Pete’s Peter Hickmanriding brilliantly and the team have been nothing short of superb. It hasn’t been an easy week by any stretch, but everyone’s kept plugging away and maintained a great attitude and it’s paid off with three wins and another podium. We’ve picked up from where we left off last year and, for me, we have the best team in the paddock. It’s a family team and a bunch of mates going racing but we’re pretty good at what we do. Fair play to BMW and Triumph as well. We’ve had very limited track time with the BMW, but it’s proven just how good a bike it is whilst Triumph have increased their support this year and it’s paid off with the win today. We’ve one more race now tomorrow so we’ll keep working and see if we can end on a high.”

The final race of the week, the six-lap Senior, is scheduled for 10.00am tomorrow.