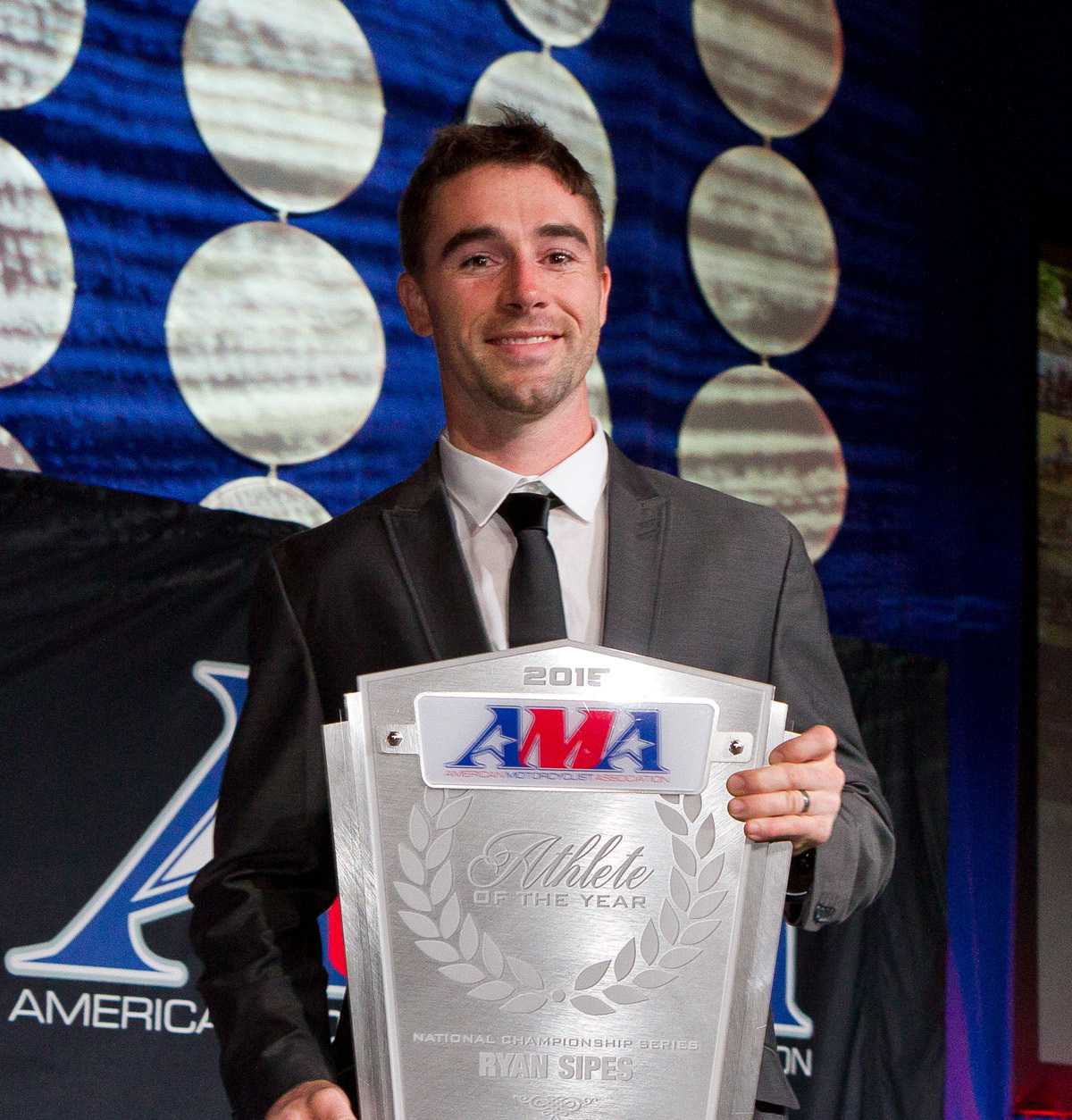 PICKERINGTON, Ohio — The American Motorcyclist Association honored the country’s top motorcycle and all-terrain-vehicle racers and organizers during the AMA Championship Banquet on Saturday, Jan. 23, at the Hyatt Regency in Columbus, Ohio. The association presented champions with their 2015 AMA National No. 1 plates and announced the 2015 AMA Athletes of the Year.

Speaking to all attendees at the banquet, AMA President and CEO Rob Dingman congratulated them on their success and thanked them for their contributions to the sport of motorcycling.

“Whether your passion is dirt track racing, motocross, hillclimb, off-road, road racing or trials, you are here tonight because you represent the standout men and women who compete on motorcycles and ATVs,” Dingman said.

“Your participation in AMA-sanctioned racing strengthens the association, empowers the motorcycling community and furthers our common interests,” he continued. “It makes it harder for those who want to end recreational riding and racing to threaten our lifestyle, and it ensures that next year, and for many years to come, we can continue to honor you and future champions in the manner that we will here tonight.”

The AMA’s highest competitive honors, the AMA Athlete of the Year Awards, recognize riders from each of the two categories of national championship competition — AMA National Championship Series and AMA Grand Championships — as well as a rider from ATV competition. Also honored were the AMA Female, Vet/Senior and Youth Racers of the Year.

AMA racing staff nominate riders for these awards, while AMA members vote for the final selections.

Husqvarna rider Ryan Sipes, who in 2015 became the first American rider to claim top individual honors in the International Six Days Enduro, was named the 2015 AMA Athlete of the Year from among racers who compete in AMA National Championship Series.

“It has been a whirlwind since it happened,” Sipes said after accepting the award. “Winning the ISDE has definitely been the coolest thing I’ve ever done — the only championship I’ve won. So what’s next? My goal is to win a GNCC championship. Obviously, I want to go back to Six Days and win again, and I want the team to win. It was a heck of a year last year. Here’s to this one being even better.”

Yamaha rider Benny Bloss was named the 2015 AMA Athlete of the Year from AMA Grand Championship competition. The 2015 AMA Motocross Horizon Award Winner, was unable to attend the banquet due to participating in the 2016 AMA Arenacross National Championship Series in preparation for the 2016 AMA Supercross East Coast Regional Series.

“I just want to thank the AMA for the nomination and all the AMA members for voting for me,” said Walker, who races for the Am Pro Yamaha team. “This is a heck of an honor. I’m definitely blown away that our year was that good. All these riders here this evening have some exceptional talent to be recognized here tonight. This caps off a really great year for us. It has been a heck of a ride, and I hope we can do it again.”

“I’m super excited to be the AMA Female Racer of the Year,” Martinez said. “I can’t wait to try and get it again next year. It’s going to be a super busy year racing both the AMA National Enduros and the GNCCs. I can’t thank everyone enough.”

Jett Reynolds from Bakersfield, Calif., was announced as the 2015 AMA Youth Racer of the Year. Reynolds won the 85cc (9-11) and 85cc (9-11) Limited championships at the 2015 Rocky Mountain ATV/MC AMA Amateur National Motocross Championship.

“I’d like to thank everyone at the AMA for even being considered for the AMA Youth Racer of the Year Award,” Reynolds said.

The AMA Vet/Senior Racer of the Year was Matt Stavish, who was the 45-plus A champion from the 2015 Kenda AMA National Enduro Championship Series.

The AMA Sportsman of the Year Award was presented to Branden Walther. Walther was a competitor in the Mini Senior 1 and Mini Senior 2 classes at the 2015 AMA Amateur National Motocross Championship. Following a crash on the start of a moto, Walther stopped to help a downed rider rather than immediately resume his own race.

“When I got up, I ran to where my bike was, but I heard someone calling for help, and I went over to help him,” Walther said.

Other award winners announced at the banquet included:

AMA Motocross Organizer of the Year

AMA Off-Road Organizer of the Year

AMA ATV Organizer of the Year

AMA Club of the Year