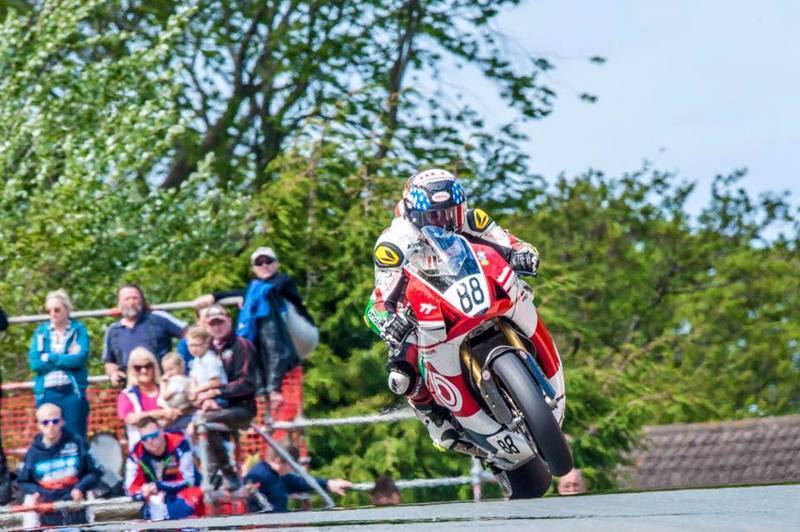 Bimota will return to the Ulster Grand Prix next week after making their real road racing debut at the international event in 2014 with current rider, Ben Wylie. Dubbed The World’s Fastest Road Race, the Ulster Grand Prix follows the 7.4 mile Dundrod Circuit, which snakes through the beautiful countryside of nearby Belfast in Northern Ireland. It is a favorite circuit amongst riders for its flowing nature and large attendance of nearly 50,000 fans. Ben Wylie will return to the Ulster Grand Prix hoping to improve on last years debut there on the Bimota BB3 while teammate, Brandon Cretu, returns to the event after a near 7-year hiatus. Wylie and Cretu are both fresh off an excellent showing at the Isle of Man TT where both riders put the Bimota BB3 through its paces and came away with highly respectable results.

“The Ulster is always one of my favorite meetings of the year. The bikes are very different to how they were at the TT as we have tried to maintain the BB3’s many good points whilst fixing the issues we had at the Isle of Man. I’m confident in the direction we are going, one of which was the switch to Maxton suspension for the remainder of the season at the Ulster and Macau.”

“The Ulster GP is a special event for me as I made my debut to real road racing here back in 2009 which began my journey to where I am today. It is an amazing track and the organizers are top notch. As many know, I suffered a broken right leg back in June during a training incident on my supermoto bike right after the TT. I do not know yet if I will be able to ride due to still recovering from the injury but I’ll be headed over to the Ulster regardless to cheer on my Bimota team and, if I can, give it a go!”

The Ulster Grand Prix race week starts on August 3 with events all week long and the racing concluding on August 8. Practice begins on August 5 and the first race for the Bimota team will be on Thursday August 6. The practice and races will be streamed live via the internet on http://www.bbc.com/sport/0/northern-ireland/motorbikes/. Tune in on practice and race days!

Please visit the team website, www.bimota.uk.com, for more information on Bimota and the team or their Facebook page Amore Moto. Fans can also follow the team on Twitter @bimotaracing and both riders Ben Wylie @wyliewizzard and Brandon Cretu @brandoncretu for the most current updates.