© 2019, Roadracing World Publishing, Inc. From a press release issued By Jon Bullee on behalf of EMRA:. 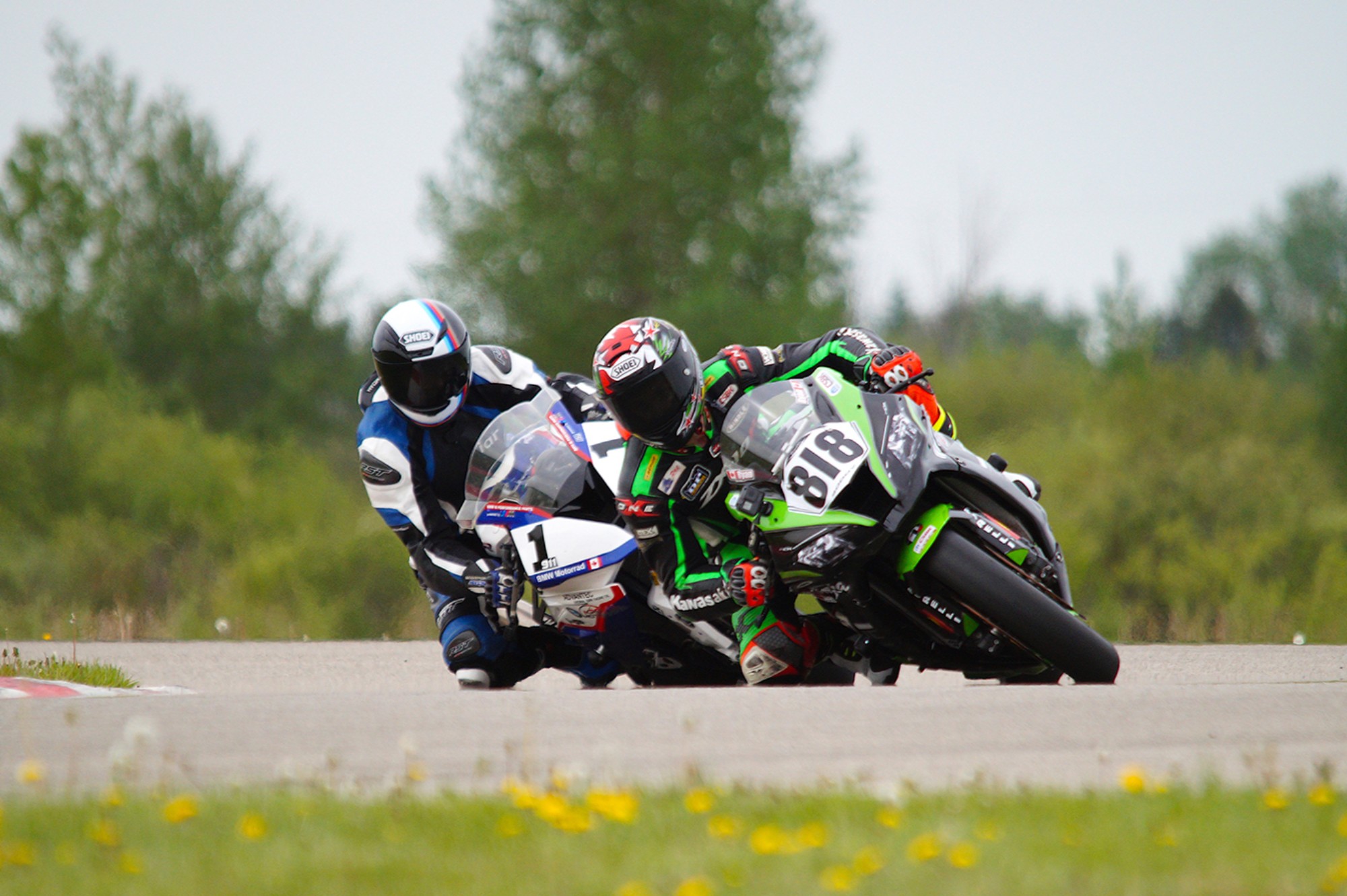 The first weekend of June has become the traditional kick off to the Edmonton Motorcycle Roadracing Association’s season at Castrol Raceway near Edmonton, Alberta, Canada. Over 90 riders registered to race on a very fresh racetrack that had undergone a number of improvements over winter.

Saturday’s qualifying action took place under sunny skies and a warming track. Lap times dropped all day, with many riders achieving personal best lap times right away. Times were close all day at the top of the charts and in the final session of the day, Jon Bullee put in his fastest time on board his Riverside Honda back CBR600RR. He would qualify first on the 600 Superbike chart and third overall for the Expert Superbike race. Ian Wall on his Argyll Motorsports backed BMW S1000RR would take the Expert Superbike poll position for Round One with a lightning-fast lap time of 1.20.7, followed by Ryan Boddy on his Pro-Am Motorsports Kawasaki ZX-10R.

As Saturday’s lap times had alluded, Sunday’s racing action would be blisteringly fast. Torin Collins, after already racing two rounds of the British Talent Cup series, returned to Castrol on his Yamaha R3 and dominated the Lightweight classes. Collins took 1.8 seconds off last year’s Lightweight Open lap record, and his time of 1.27.8 will surely stand for a long time. Lap times would drop as the day went on, the sun would shine and a large number of spectators came out to watch the opening round of racing action. The 600 Superbike grid formed, and Jon Bullee on his CBR600RR grabbed the hole-shot, followed closely by Brian Worsdall on his Honda Extreme backed CBR600RR. Bullee would put down lap times faster than those in qualifying and Worsdall matched his times lap by lap. The two would gap the field and eventually caught lapped traffic. Worsdall was unable to get close enough to attempt a pass, and the two finished the race separated by 0.2 seconds. After the race, Bullee would say, “I managed to pull off a great weekend, pole position and first place in both my races, but I’ve got to give it to Brian. He pushed me all the way. I thought for sure when we caught lapped traffic he would find a way around. I managed to hold on and take the win. I need to thank my family and friends for all the support and the folks at Riverside Honda for always giving me the very best. There’s no way I’d be riding like this without their help. Thanks to all the volunteers and everyone that helps put on such a great weekend of racing.”

Round One’s main event would be the Expert Superbike race, with defending champion Ian Wall on his S1000RR on pole lined up beside Ryan Boddy on his ZX-10R and Brian Worsdall on his BMW S1000RR completing the front row. The red lights went out and Ryan Boddy grabbed an immediate hole-shot with Wall close behind, followed by Shane Caravan on his Yamaha YZF-R1, having gotten an incredible start from the second row. Ryan Boddy and Ian Wall would slowly gap Caravan, who has fighting for the final spot on the podium. The laps ticked down and Boddy stayed in front, the crowd of spectators cheering on both riders expecting a dramatic last-lap, first corner pass attempt by Ian Wall. Wall never made the pass and Boddy managed to close all the doors on the final lap and take his first Expert Superbike win. Becoming only the 8th Expert Superbike race winner in the 5 year history at Castrol Raceway. The final step on the podium was awarded to Shane Caravan, who managed to outlast Brian Worsdall and take third place. On the podium, Ryan Boddy would say, “Ian had the pace all weekend long, but having the Open Sportbike race earlier gave me some time to study him and see where he was faster than me. By the time we started the Superbike race I was ready! I lined up, dropped the clutch, got the hole-shot, and never looked back. I could hear Ian all race long right on my tail but I just kept pushing as hard and as fast as I could, setting personal best lap times. By lap nine my right hand started to go numb and I couldn’t feel how hard I was braking or if I was actually giving full throttle but I pushed on. I knew lap times were slowing but I just kept pushing, expecting a pass at any moment but it never happened. It was truly one of the toughest, most hard-fought victories in my racing career. I need to thank Pro-am Motorsports, Canadian Kawasaki, Viscious Cycle, Vortex Racing, DP Brakes Pet Auto Body, Hindle Exhaust, and Pirelli Racing tires for their continued support; without them this wouldn’t have been possible.”

Rounds Two and Three will be a double-header race weekend, taking place on July 5-7th, from Edmonton’s Castrol Raceway. For more information on the racing, check out www.emra.ca