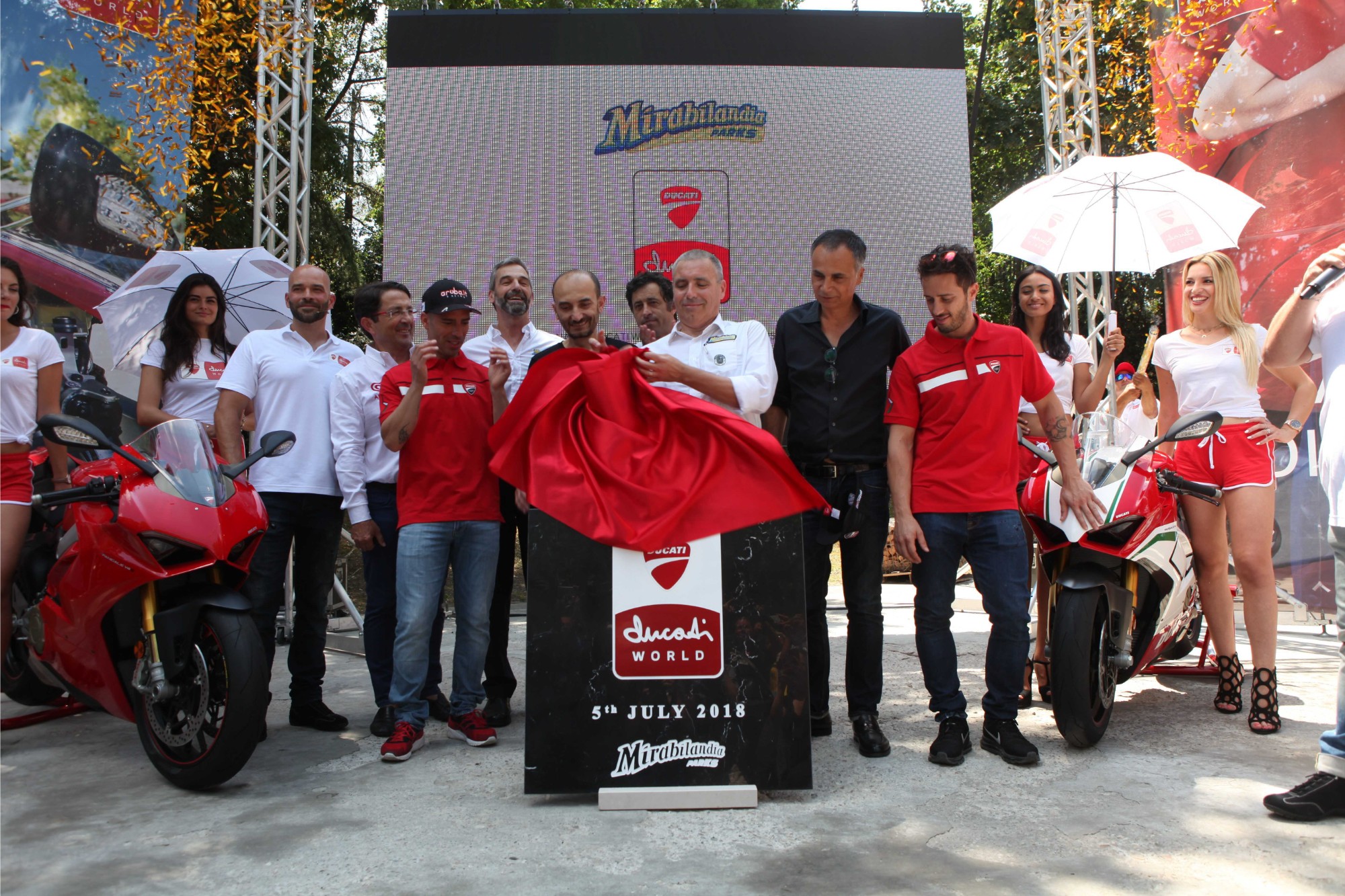 Borgo Panigale / Ravenna, 5 July 2018 – The partnership between Ducati and Mirabilandia announced last November now takes shape with the official laying of the first stone inside the famous Italian amusement park located in Ravenna, in the Emilia-Romagna region.

“Ducati World” will occupy some 35,000 m2 inside Mirabilandia, making it the first themed area in the world to be inspired by a motorcycle brand.

In addition to the management of Mirabiliandia, the opening of the building site was attended by Claudio Domenicali, CEO of Ducati, and MotoGP and SBK flag bearers Andrea Dovizioso and Marco Melandri. The two champions, both hailing from the area, witnessed the start of the work and can’t wait to try out the new Ducati World attractions for themselves.

The Ducati World attractions will include a racing-inspired interactive roller coaster, which simulates a ride on a Panigale V4. This stunning attraction transforms passengers into real riders. It lets them control vehicle acceleration and braking, making every run an authentic head-to-head between bikes roaring along parallel rails. The area will also host a facility entirely dedicated to the Ducati Experience, with latest-generation ride simulators, unprecedented family attractions and a Ducati Shop offering apparel and accessories. There will also be three Ducati and Ducati Scrambler-themed refreshment areas.

“Thanks to the partnership with Mirabilandia, Italy’s biggest amusement park, Ducati World will be able to provide a truly thrilling experience, with interactive motorcycling-themed attractions for adults and children alike”, stated Claudio Domenicali, CEO of Ducati. “Our company has always been about passion and engagement and aims to offer Ducati enthusiasts a system that goes far beyond the experience of riding the motorcycle. Ducati World, then, fits this vision perfectly. It also tightens our bond with this incredible territory, which has forged champions and fostered an unrivalled passion for speed”.

The addition of the dedicated Ducati World area extends the appeal of the amusement park and offers something for every age.

“Mirabilandia is aiming high for 2019”, says Riccardo Marcante, General Manager of Mirabilandia. “The decision to join forces with a brand as beloved as Ducati, as renowned worldwide as it is locally, will, we believe, attract more foreigners to Mirabilandia and appeal to motorcycle and motor racing fans. Mirabilandia already offers plenty of thrills, and with Ducati we look forward to providing many more”.

This partnership, then, is set to generate massive interest in what is Ducati and Mirabilandia’s homeland.

“The Ducati World project”, states Andrea Corsini, Tourism and Business councillor for the Region of Emilia-Romagna “represents a huge local development opportunity and will be a strong magnet for visitors. Motor Valley and Ducati have joined forces with one of the biggest attractions on the Adriatic coast, Mirabilandia, one of Italy’s best-known amusement parks, to boost image, appeal and products. All this is in keeping with a new regional strategy – which, last year, attracted 57 million visitors – that focuses on key Emilia-Romagna attractions such as the Motor, Food and Wellness Valleys, all hubs of local excellence. Thanks to local entrepreneurship and the support of public bodies, this partnership”, sums up Corsini, “will give tourists and citizens yet another reason to experience a region that is truly unique”.

Founded in 1926, since 1946 Ducati has been manufacturing sport-inspired motorcycles characterised by high-performance Desmodromic engines, innovative design and cutting-edge technology. With its factory located in Bologna’s Borgo Panigale district, in 2016 Ducati celebrated 90 years since it was founded. The model range covers several market segments with the following families: Diavel, Hypermotard, Monster, Multistrada, SuperSport and Panigale. In 2015 Ducati presented the Ducati Scrambler: a new brand made of bikes, accessories and apparel that provide the last word in creativity and self-expression. These authentic icons representing what the world knows as “Made in Italy”, together with an extensive range of associated accessories and technical and lifestyle apparel, are distributed in 90 countries globally. In 2017 Ducati delivered 55,871 bikes to customers, continuing the growth trend of the last eight years. Ducati competes in both the World Superbike and MotoGP World Championships. In Superbike, Ducati has won 17 Manufacturers’ titles and 14 Riders’ titles. Ducati has been competing in MotoGP since 2003, winning both the Manufacturers’ and Riders’ titles in 2007.

Mirabilandia is the largest amusement Park in Italy, with a total surface of 850.000 sqm and 47 attractions. Among the most famous and breath-taking attractions there are: Katun, the longest inverted coaster in Europe, iSpeed, the highest and fastest launch coaster in Italy and Divertical, the highest water coaster in the world. Among the attractions for family fun there are: Far West Valley – built in 2016 – the themed area dedicated to the far west time and Dinoland, the largest area in an amusement Park in Italy dedicated to the dynos world. Not to be missed, the large shows program, featuring among the others “Grosso Guaio a Stunt City”, the number one stunt show in Europe, with the highest loop, 15mt of height, ever performed in an amusement Park. Mirabilandia also includes, Mirabeach, its beautiful and fun water park. In 2017 season the park added a Virtual Reality experience to its family dual-tracked roller coaster Master Thai.