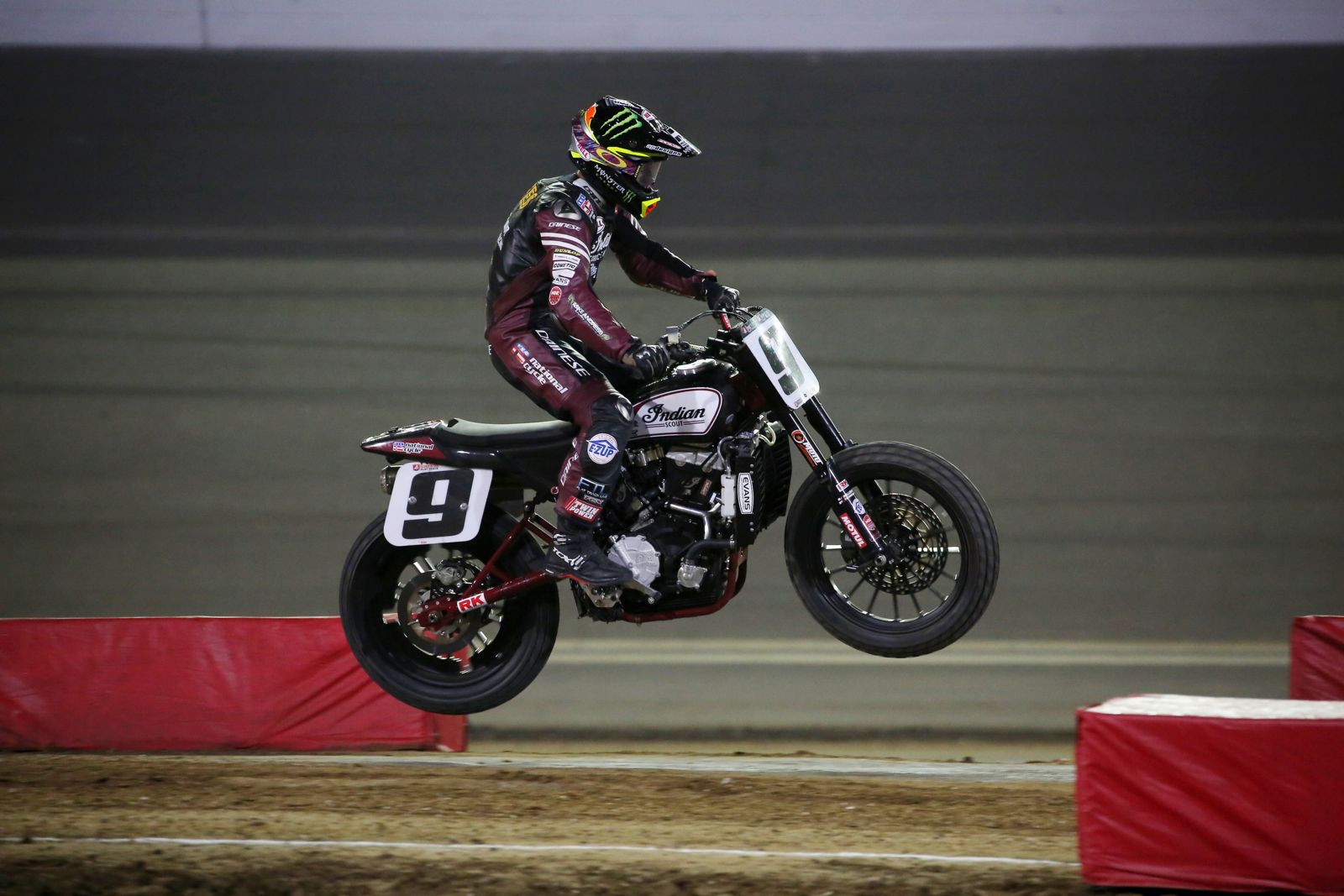 DAYTONA BEACH, Fla. – History was made under the lights at Daytona International Speedway as the American Flat Track series entered its new era at the Harley-Davidson DAYTONA TT presented by Politis & Matovina. Jared Mees took home a dominant AFT Twins presented by Vance & Hines win in to become the first rider to win an American Flat Track race on the Indian Motorcycle Scout FTR750.

The No. 9 Indian Motorcycle Rogers Racing FTR750 rider’s big win at the 2017 season opener also marked the first time that a rider won a TT on twin in nearly 34 years, when fellow National No. 9 rider Jay Springsteen won at the Peoria TT in 1983.

“You don’t know how special it is to win the first Daytona TT on the Indian,” Mees said. “I’m going to go down in the record books as the first to win on the Indian. I’m so excited just for my entire team and the hard work that everybody put in. It’s unbelievable what we all went through. Indian Motorcycle did an outstanding job.”

The win also marked a personal record as Mees’ first TT win. It also served as personal redemption as Mees gets his run at recapturing the No. 1 plate off to a good start.

Although it’s a new era for flat track, it was the usual suspects. Mees’ rival and fellow Indian Wrecking Crew rider Bryan Smith finished second on the No. 1 Indian Motorcycle Racing backed by Allstate FTR750. Although it was not a win, the reigning Champ was happy to leave Daytona right on Mees’ heels.

“There was a lot of pressure after this race,” Smith said. “Like Jared said, it’s like, ‘oh yeah, we gotta race next weekend too.’ There was so much focus on this weekend and especially us having a new bike and a new team. So second place at a TT in Daytona. I’m happy.”

Joining the Indian Motorcycle duo on the podium was TT specialist Henry Wiles on the No. 17 DPW Racing Kawasaki Ninja 650.

“I actually had a pretty good run, considering we came from the second row,” Wiles said. “We built a pretty different bike for this race and I thought it would work good in the corners, kind of like it did. But like these guys said, there wasn’t much of a track so it was really hard to make up time on guys. Once everybody kind of got settled in, it was kind of tough to make up time anywhere. One place that I could make up time, because my bike was a little bit different, was kind of through the tight stuff here and going off into the first corner. I think once we got them stood up and down, I was lacking a little bit of traction but also a little bit of motor, so it was just hard to make up the straightaway advantage I’d give up to these guys, but it was a fun race for me.”

Jake Johnson had a bit of redemption himself, as the No. 5 Harley-Davidson Factory Flat Track Team XG750R rider was plagued with poor luck all day until when it counted, taking a fourth-place finish in the Main. Completing the top-five was Bronson Bauman on the No. 37 Rod Lake Kawasaki Ninja 650.

Dalton Gauthier fired the first shot in the AFT Singles class with a hard fought win on the No. 22 Estenson Racing Yamaha YZ450F over Wyatt Anderson on the No. 120 Waters Autobody Racing KTM 450 SX-F. Like Johnson, the day started rough for the young Gauthier, but it ended well when it counted most.

“It feels awesome considering I was 45th in qualifying today with bike problems, but the team worked through it. I’m so pumped right now. I charged the whole race and it means the off-season training worked this year. This winter, actually. I can’t thank Estenson Racing enough for all of the work that he’s done for me and he’s put me on some badass bikes. I’m so pumped right now. I can’t believe I just won that.”

Completing the podium was one of the other rising stars in the sport, Kolby Carlile on the No. 36 K.C. Cycle Honda CRF450R.

The American Flat Track series heads north for the Atlanta Short Track at Dixie Speedway on Saturday, March 25. Atlanta fans will hear the roar of the AFT Twins class as they race on the red Georgia clay for the first time and will see if Jared Mees will secure his second win of the season. Also, spectators can witness the up-and-coming talent in the AFT Singles class, as they compete on the 3/8-mile track where Dalton Gauthier will contend to hold the lead in the point standings. Tickets for the Atlanta Short Track can be purchased at https://www.showclix.com/event/georgia-short-trac…

American Flat Track is the world’s premier dirt track motorcycle racing series and one of the longest-running championships in the history of motorsports. Sanctioned by AMA Pro Racing in Daytona Beach, Fla., the series is highly regarded as the most competitive form of dirt track motorcycle racing on the globe. For more information on American Flat Track, please visit http://www.americanflattrack.com, follow us on Twitter, like us on Facebook, live stream the events at FansChoice.tv and catch all the American Flat Track racing action on NBCSN.

More, from a press release issued by Daytona International Speedway:

DAYTONA BEACH, Fla. – A reinvented series, a new track layout and the inherent excitement of Bike Week At Daytona combined for a dynamic debut for the DAYTONA TT on Thursday night, with Jared Mees winning the headlining AFT Twins main event on an Indian Scout FTR750.

In the process, history was made. Mees gave the Indian Motorcycle Company its first Daytona victory since Floyd Emde won the Daytona 200 in 1948.

“Right after the semifinal we made a couple adjustments with the bike, moved some things around,” Mees said. “Then I got a great start. That was the key.”

Eighteen-year-old Dalton Gauthier of Pine Grove, Pennsylvania, riding a KTM 450 SX-F, got by Wyatt Anderson (TM 450 SX-F) on the last turn of the last lap to win the 15-lap AFT Singles main event. Anderson, who finished second, led from the green flag until Gauthier’s inside pass.

“Seeing that I was close enough to make a pass, I just stuck it underneath,” Gauthier said.

Bike Week At Daytona wraps up on Saturday with the 76th running of the DAYTONA 200 road-race classic. The storied event dates to 1937; it was held from 1936-1960 on the old Daytona beach-road course that utilized both the Atlantic Ocean shoreline and State Road A1A. In 1961 the race moved to Daytona International Speedway.

In addition to on-track action, a variety of other fan-friendly activities are rounding out Bike Week At DAYTONA.

The GEICO Bike Show will take place on Saturday adjacent to Harley-Davidson Thunder Alley. Registration is from 9 a.m.-3 p.m. with a $20 entry fee per bike. The awards presentation will be held at 5 p.m. on the Harley-Davidson Thunder Alley Stage. Trophies will be awarded in 10 categories and a $1,000 and $500 cash prize will be given to Best in Show and Judge’s Choice, respectively.

The Hot Leathers Fashion Show and Bikini Contest, located in Harley-Davidson Thunder Alley, is scheduled for Saturday at 1 p.m.

More, from a press release issued by Harley-Davidson:

Piloting the new XG750R in its first racing action, Johnson battled on a tight-and-technical 0.6-mile TT course constructed in the infield of Daytona International Speedway in Daytona Beach, Florida. Starting from eighth place in the 25-lap main, Johnson charged through the field to miss a spot on the podium by just 0.516 second.

“The power and potential of the new XG750R was on display in Daytona tonight,” said Scott Beck, Harley-Davidson director of motorsports marketing. “The Harley-Davidson Factory Flat Track Team responded to a big challenge, bringing an all-new racing motorcycle to an all-new track format.”

Johnson turned his night around after a 12th-place finish in the first heat race moved him to the last-chance qualifier heat, which he failed to finish after a mechanical issue. Johnson was able to regroup and use a provisional start to claim a spot on the back row of the semi-final heat, and finished fourth to advance to the main.

“Nobody knew what to expect from this new track. I think we were prepared but I struggled personally early in the evening,” said Johnson, a two-time AMA Grand National champion who is in his first full season racing for the Harley-Davidson Factory Flat Track Team. “The Harley XG750R was strong all night but I hit the ground twice and the team had to scramble. We all rallied together. I’m really excited to be racing with this outstanding Harley-Davidson Factory Flat Track crew behind me this season.”

All eyes were on Indian heading into the season opener after assembling a team featuring three of the sport’s most decorated riders and armed with Indian’s state-of-the-art Scout FTR750. The season-opening victory brought dramatic validation to Indian’s bold re-entry into the sport it had once dominated, reigniting the Indian Motorcycle vs. Harley-Davidson rivalry that had carried the sport throughout its glory days.

“Carrying the torch for the return of one of motorcycle racing’s most iconic and historic brands, makes this victory truly special for me,” said Mees. “We knew we had a special bike this year that would give us a real shot at every race this season, and to start off on top is huge. But this victory isn’t mine alone. The entire team was critical to this victory, and I couldn’t be more optimistic about our prospects for the remainder of the season.”

Piloting Indian’s new state-of-the-art Scout FTR 750, Mees finished first and third in the evening’s first two heats. The main event began with Mees taking lead in lap 1 heading into the first turn, and the three-time Grand National Champion never looked back. Meanwhile, Smith ran the majority of the main event in the fifth position before catapulting from fifth to 2nd over the final five laps, joining Mees on the podium. After such an impressive showing by the new Indian ‘Wrecking Crew’ in Daytona, it’s clear that Indian Motorcycle Racing will be a force to be reckoned with in 2017.

“With such a storied history of success in flat track racing, it was imperative that Indian bring every possible resource to bear to be successful, and to be atop the podium in Daytona is the ultimate validation for us,” said Gary Gray, Product Director for Indian Motorcycle. “This season is more a marathon than a sprint, and this is merely the beginning. While we’re proud to get off to such a great start, our eyes are fixed on a championship.”

Indian Motorcycle Racing, backed by Allstate Insurance, will look to stay on top as American Flat Track heads to the Atlanta Short Track on March 25.

Indian Motorcycle Company, a wholly-owned subsidiary of Polaris Industries Inc. (NYSE: PII), is America’s First Motorcycle Company®. Founded in 1901, Indian Motorcycle has won the hearts of motorcyclists around the world and earned distinction as one of America’s most legendary and iconic brands through unrivaled racing dominance, engineering prowess and countless innovations and industry firsts. Today that heritage and passion is reignited under new brand stewardship. To learn more, please visit www.indianmotorcycle.com.