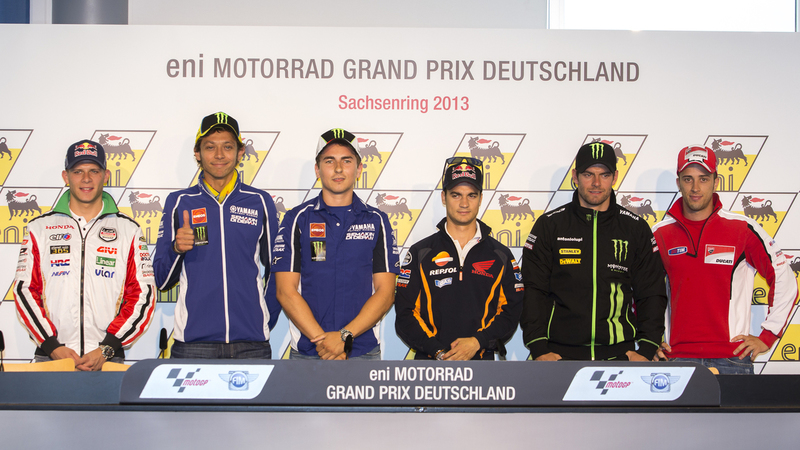 The eni Motorrad Grand Prix Deutschland at the Sachsenring kicked off today with the pre-race conference where Repsol Honda Team’s current MotoGP™ championship leader Dani Pedrosa was joined by Yamaha Factory Racing duo Jorge Lorenzo and Valentino Rossi, as well as Monster Yamaha Tech3’s Cal Crutchlow, Ducati Team’s Andrea Dovizioso and LCR Honda MotoGP’s local boy Stefan Bradl. Pedrosa, who has stormed to victory in Germany for the last three years in succession, is aware that competition this year will be strong: “We have to work very strong on the weekend and go practice by practice, trying out the tyres on the bike to find a good setting and have a good race result for the team and myself. I think we were struggling on tracks where we have always struggled, so of course we were behind, but we more of less expected that. I think we can have some good races from now on.” Despite only two weeks in to his healing process from a broken collarbone, Lorenzo is keen to mount a serious challenge on his compatriot: “I was really surprised to have the possibility to race at Assen, but I am also surprised at the very quick recovery that I am having. Every day I feel a big improvement, also because I have the physio working with me every day, morning and afternoon, lots of hours working together. I don’t feel perfect, but I feel much better than I did at Assen and that is very good.” Crutchlow, who once again made the step up onto the podium last time out in Assen, is looking for more at the tight Sachsenring circuit: “It [Assen] was a missed opportunity, but I could look at every race and say it was a missed opportunity because I have never won. It’s the same at every race because I haven’t won a race yet. I felt more confident towards the end of the race, but that is too late. It’s not just the bike; I still feel I have to improve as a rider to be able to both start and finish the race strongly. I can honestly say I had a really bad first year here, but last year was really good until I made a stupid mistake and went into the gravel while fighting with Andrea and Ben.” Rossi comes fresh from his first victory since 2010, and is aiming to carry that momentum through to this round: “For me, this time after the victory, it is just a lot more positive because at Assen it was a great weekend and I was able to stay with the top guys in all of the practices, wet or dry, and after the race it was fantastic. So it will be important here to confirm that I have raised my level and increased my speed to try and fight with the top guys. This track is not one of my favourites with regards to the layout, but I have had many great battles and memories…also in 2010 when I came back with a broken leg and did a very good race. I think our bike will be very good here, so we will see.” Ducati and Dovizioso had a race to forget in Assen, making this race a very important one: “It will be a tough weekend. We know that, but we had a good test at Misano last week. We will try different things; a new chassis, with better feeling on the last part of braking for corner entry. It won’t make a big difference in lap time but it’s a bit different. We are not fighting for the championship so we can take this risk. I don’t know how Ducati will be at this track…it won’t be so easy because the level of bikes and riders at the front is so high, but we have to start very focused and try to use the best of our bike.” Arguably bearing the biggest weight of expectation is Bradl, who contests his second year of MotoGP™ in front of his home crowd: “We expected a little bit better at Assen, but we had some problems at the beginning of the race. I did not feel so comfortable so I was not able to push and was losing some time at the beginning. We are better than we showed at Assen; we know our problem and can also be fast at every racetrack, especially at the Sachsenring, so I am looking forward to first practice tomorrow. As you can see, the fans in this area are crazy because they love this race and it’s so important for them and for me it’s so nice because they’re supporting the German riders so far. It’s always a fantastic feeling to ride in front of the home crowd and they’re pushing you to the absolute limit.” Earlier in the day, NGM Mobile Forward Racing’s Colin Edwards, Stefan Bradl, Moto2 riders, Desguaces La Torre SAG’s Marcel Schrotter and Technomag carXpert’s Dominique Aegerter, as well as Interwetten-Paddock’s Moto3 Philipp Oettl visited the hometown of renowned German author Karl May. May, who was born only a few miles from the Sachsenring, was responsible for writing some of the most renowned and popular Western stories, and is a historic figure in those parts. Not only did they get to dress up as “Cowboys and Indians”, but they also got to get hands on with their characters’ roles. Following this they visited the actual house May was born in, to witness where this literary visionary stemmed from.