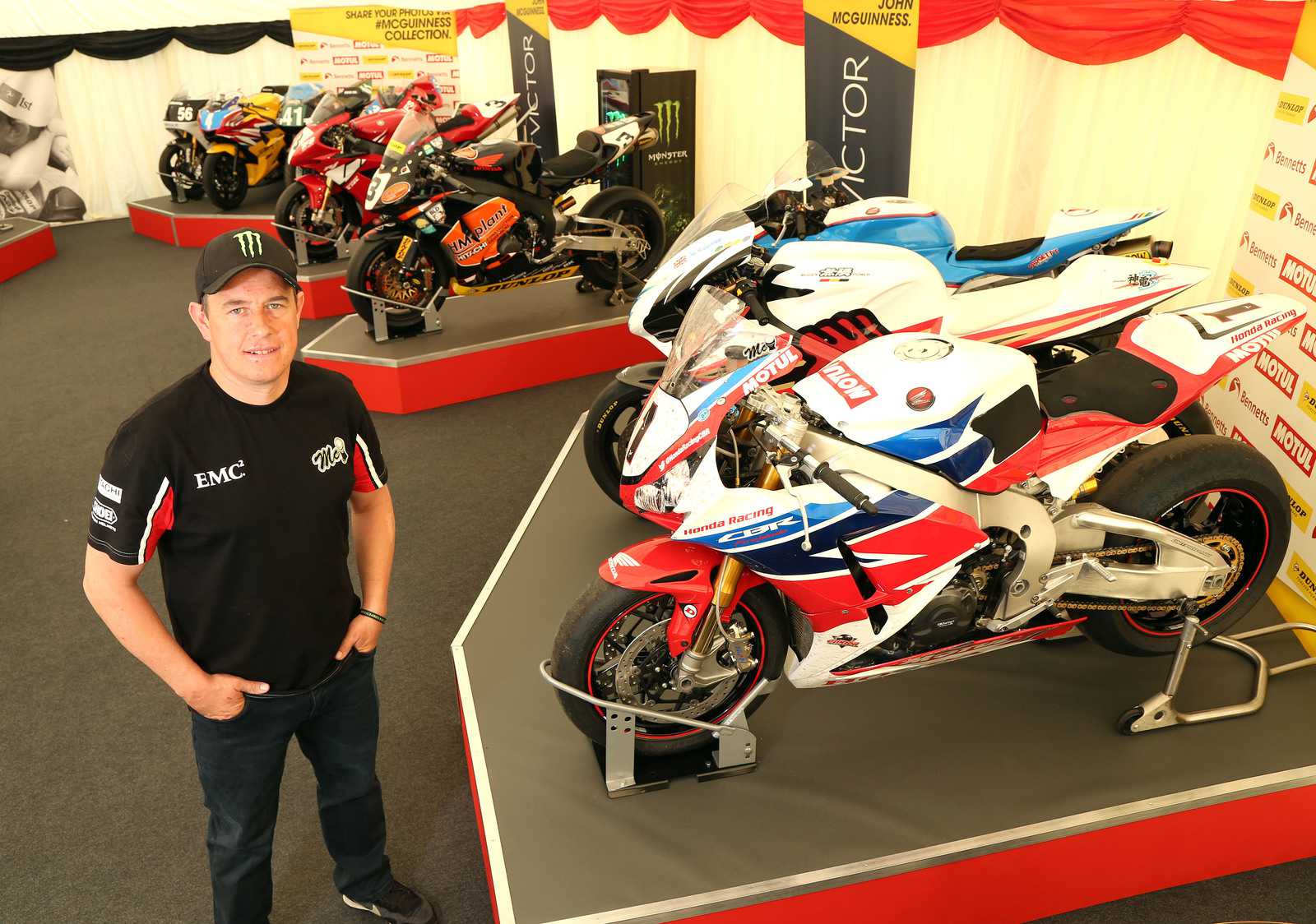 Visitors to this year’s Isle of Man TT Races, powered by Monster Energy, are in for a rare treat with the ‘John McGuinness Collection’ displaying a wide variety of machines from the Morecambe Missile’s iconic career around the Mountain Course.

Celebrating 20 years of John’s incredible TT journey, the display, in conjunction with Dunlop, Bennetts and Motul, sees a total of 12 bikes available for public viewing in Nobles Park including eight of which have taken wins around the 37 and ¾-mile circuit.

It was in 1996 that John made his debut on the island and that’s where the display starts with the 250cc Paul Bird Honda that he piloted to 15th place in that year’s Lightweight 250cc race. The second bike is also a two-stroke machine and it’s one of great significance as it’s the 250cc TSR Vimto Honda that John rode to his maiden TT triumph, the 1999 250cc race.

His second TT win came in the Singles race of 2000 and the Chrysalis AMDM can also be seen along with the ValMoto Triumph used in the 2003 Junior 600cc race.

2004 was a significant milestone for John as it was the year he took his first TT hat-trick and all three of those machines – the IFS R1 Yamaha, the IFS R6 Yamaha and RLR400 Honda – are all on view.

The next bike is also one of great significance as it not only took John to victory in the 2007 Senior, the combination also created history with the first ever 130mph lap of the Mountain Course, 130.354mph.

The final three machines are all from the last two years with the 2014 Shinden 3 Mugen, the 2014 Valvoline Racing/Padgetts Honda CBR600RR and the Honda Racing Fireblade, the bike that saw John win last year’s Senior, his 23rd TT victory, and also set a new outright lap record of 132.701mph.

In addition to the display of John’s former machines, it’s also home of his 2016 Superstock effort and everyone can see his team prepare the EMC2/Bet Victor Honda Fireblade.

Speaking about the collection, John said; “Having the display is something I’ve been thinking of for a while and it was a conversation with Mark Sears of Dunlop earlier this year that kick-started everything. Sadly, Mark lost his life in an accident a couple of months ago but we’ve seen the project through as I wanted to give something back to all the TT fans and share my 20-year journey with them.”

“What’s nice about the collection is there’s a real variety in there including two-strokes, four-strokes, singles, 400s, Superbikes and electric bikes and each and every one of them has a story to tell. I can still remember my first practice lap of the course and it was wet, cold, foggy and sunny and I’m still tearing round the place today. The TT means so much to me and it’s been an incredible journey so far, a journey that the fans have all been part of so come down and have a look!’

As well as the rare collection of motorbikes, race fans can also buy a wide range of the official John McGuinness merchandise including fleeces, T-shirts, polo shirts and beanie hats.

23-time TT Race winner John McGuinness has brought together a collection of race bikes that have defined his twenty year TT race career in a display in Nobles Park, in the TT Grandstand area.

The free to enter exhibition, produced in association with John’s sponsors Dunlop, Bennetts and Motul features eight of his TT winning bikes as well some of the career defining bikes he has raced around the TT Mountain Course.

The exhibition includes the Paul Bird Motorsport RS250 Honda that he raced in 1996, his TT debut year and the iconic Demon Vimto TSR 250 that he won his first TT in 1999, which was also his British Championship winning bike.

Other instantly recognisable bikes include the 2007 Centenary TT winning Superbike and Senior machine, on which John became the first rider to break the 130mph mark. It is notable that John is the first rider to pass 127, 128, 129 and 131mph as well.

The definitive collection features other TT winning bikes including the Chrysalis AMDM 720, the 400 RLR Honda that won the 2004 Lightweight TT and the Yamaha YZF R1 on which he won his first ‘big bike’ TT race in 2004.

More recent bikes include his Padgetts CBR600, for whom John raced between 2007 and 2014, and his Honda Racing Superbike on which he set the current outright lap record of 132.701 in last year’s PokerStars Senior TT.

The breadth and range of the machines is testament to the fact that John has won TT races on many different types of machines including singles, 250’s, 400’s, 600’s, Superstock and Superbike machines as well as his electric Mugen bike from 2014.

As well as the collection of bikes, the exhibition area is also serving as the working garage for the EMC2/Bet Victor Superstock Honda that John will run in Monday’s RL360 Quantum Superstock Race.

Speaking about the collection, John said;

“Having the display is something I’ve been thinking of for a while and it was a conversation with Mark Sears of Dunlop earlier this year that kick-started everything. Sadly, Mark lost his life in an accident a couple of months ago but we’ve seen the project through as I wanted to give something back to all the TT fans and share my 20-year journey with them. We’ll also be working on the bike in there so people will get the chance to have a look at a race team at the same time”

He continued: “I can still clearly remember setting off down Bray Hill on the RS250. It was four seasons in one day – wet, dry, wind, sun, fog and mist. The TT means so much to me and it’s been an incredible journey so far, a journey that the fans have all been part of so hopefully people will come down and enjoy the experience.”