Facing Court Date Next Month For 2013 Incident, ​Niccolo Canepa Offers Explanation Of Recently Surfaced Video Apparently Showing Him Causing Another Rider To Crash During A Track Day At Mugello

Facing Court Date Next Month For 2013 Incident, ​Niccolo Canepa Offers Explanation Of Recently Surfaced Video Apparently Showing Him Causing Another Rider To Crash During A Track Day At Mugello 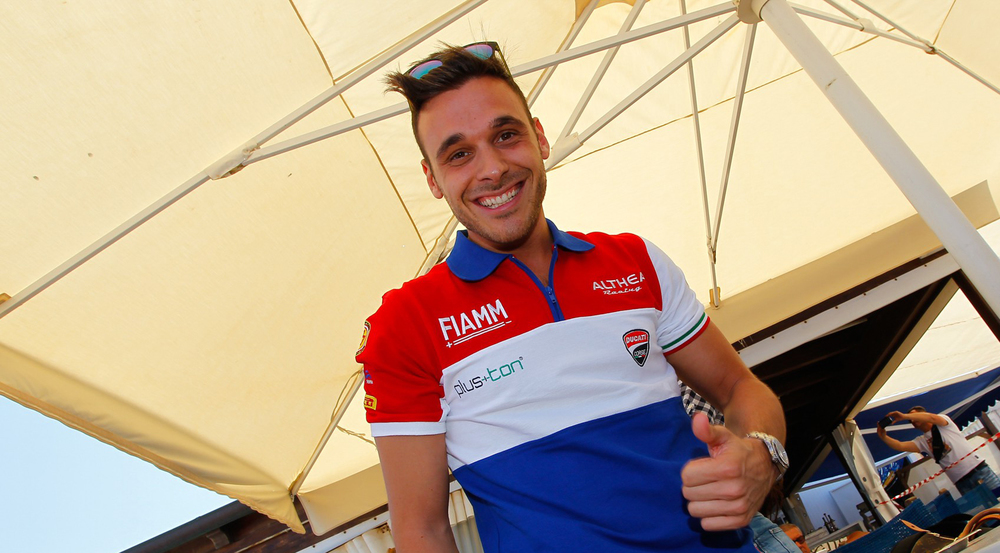 In late July, European media began reporting that FIM Superbike World Championship rider Niccolo Canepa was scheduled to appear in court September 30 in his homeland of Italy on charges of assault after a video surfaced on the Internet.

That 24-second video (https://www.youtube.com/watch?v=9h3LvcY2CJs), shot by a trackside closed-circuit camera system at Mugello and time stamped September 23, 2013, shows a rider pulling off the racing line, slowing, looking back, reaching out with his left hand, making contact with another rider and/or their bike, and that rider’s bike braking suddenly and sharply, sending the rider over the handlebars and onto the track.

The rider who reached out and made the contact is seen looking back at the rider on the ground and riding away without any visible reaction.

Canepa is accused of being the rider who reached out and made the contact with the other rider, who is identified as Davide Cappato. Cappato suffered a broken collarbone in the incident, according to news reports out of Italy.

After the video surfaced, Roadracing World attempted to contact Canepa and his team, Althea Racing, to confirm that it was indeed Canepa in the video and to learn more about what happened, but we received no response from the rider or the team.

After the video surfaced, Canepa’s accounts on Twitter and Facebook vanished, but Canepa recently returned to social media and on his official Facebook page posted the following on August 20:

I’m Still here! I didn’t run away. I had to temporarily stay away from social networks in order to protect myself from unfair attacks and prepare myself to face the Malaysian World SBK round in the best possible manner. I have read plenty of nonsense about what happened and its time that I stand up for myself and give my version to the public even before I present myself before the Justice of Peace officer. I cannot go into deep particulars regarding the procedural documents, just as l cannot discuss about every single detail of the happened because my lawyer would get furious if l did and he will probably be furious at me for writing this letter, but I must explain what happened.

I would like to begin by saying I’m sorry about the accident in which Cappato was involved and that is why l immediately went to the Medical Centre of the circuit (from which he was later on dismissed with a 10-day prognosis) to make sure he was ok. He was perfectly alert and conscious. We talked: HE WAS THE ONE TO APOLIGIZE for certain driving behaviors and misunderstandings, saying that things like that can happen on track. HE DID NOT ACCUSED ME, even if a few days later he did come out with a charge. Now I would like to explain how I was just defending myself.

I was give teaching instructions to a guy who was driving his 600cc at Mugello for the second time in his life. I once held the SBK track record at Mugello so l seized the moment to teach him some tricks about my favourite circuit. In the meantime Cappato probably didn’t understand my role as an instructor and he must have thought that it was strange – or even provocative – that l slowed down in some spots (out of the trajectory and without hampering anyone, obviously, as l learned during the FMI course), but l was doing that in order to wait for my “pupil”, to whom l had just shown how to face a curve or a braking point. Several times before the incident, Cappato followed wrong trajectories in a dangerous fashion and he surpassed me more than once with only a few centimeters separating us while on start-finish straight at high speeds! As everyone who has ever raced knows, YOU DON’T MESS AROUND ON THE ON START-FINISH STRAIGHT. MANY TIMES, overtaking Cappato between the curves, l SIGNALED TO HIM TO PASS THROUGH WITH A SAFETY DISTANTANCE BETWEEN US because he was too dangerous and he was putting in jeopardy the safety of both me and my pupil, as it can be seen in the videos that they have not shown you Without anger, without hard feelings and peacefuly.

And here we are to the video. If you rid yourself of the prejudice that might cloud your judgment, you can see what really happened.

He was probably annoyed at me by my request, or maybe didn’t understanding the gesture I made. Cappato firstly did a wheelie exiting the curve, while l WAS TURNED and out of trajectory IN ORDER TO WAIT FOR MY PUPIL, and then he landed few centimeters from me. After that he got alongside me and started forcing me to the right side of the track (while furiously moving his helmet), forcing me to slow down which created a dangerous situation both for me and for the other riders approaching at high speed, he did this even though the track in front of him was completely free so there was no excuse for his behavior. I was Shocked by the unexpected and hostile actions of Cappato as in the meantime l saw my pupil approaching very fast and my immediate gesture towards Cappato was meant to say: “BACK OFF, STAY AWAY”, in order to restart quickly without risking an accident. Those who claim to have seen me in the video grabbing his brake, cannot do that without malice: it can bee seen that I DID NOT TOUCH THE BRAKE, MY HAND TOUCHED THE FOREARM OF CAPPATO, who, probably because he was frightened, pulled too hard on the brake, losing control of his bike. That’s it.

I am really happy to see that many people understood the dynamics of this incident even before l explained it in this post, and defended me knowing the kind of person l am, no matter the accusations were made. I am sad to see how people have criticized me because – according to them- l should be guilty for failing to assist Cappato after the accident. Maybe those who call themselves “riders” should know that it is totally forbidden to stop on the track and, even worse, to go back. Marshalls are there for it. Please, do not ever do that!

l am also truly disappointed by some journalists (fortunately, very few) that avoided asking me about what happened, preferring to publish my name and a small part of the video. (Those are) Journalists that do not sign themselves and that maybe do not remember that l am one of the few riders to never had one – I MEAN NOT EVEN ONE – penalty or censure by the International Federation. I passed the exam to become a Federal Instructor, role (that, as you can see, l do not conduct only on paper) of which l am proud, because it is the passion for bikes and not for money that makes me love to ride and to teach others to do it. They probably do not also remember that, after 10 years since my first competition in a world championship, after one world title, after one year in MotoGP, after many victories and defeats too, l have never been involved in an incident with other riders. But at least l hope that now, after this declaration, the journalists might publish my statement with the same emphasis with which they published that part of the video.

I am sure that there will be people who disapprove and have contrary opinions, but l do not accept that my reputation as both a rider and as a man to be questioned. The same way l do not accept prejudice assaults against my capabilities and against myself (or even against my loved ones: there have been very nasty insults against my fiancée and family too). I will be accountable for my actions before the courts, so will those who defame me.

I can now breathe a sigh of relief, hoping that all of those who had accused and insulted may finally understand WHAT REALLY HAPPENED. I want to end with a suggestion about something l learned the hard way a few weeks ago: before you rush into any judgment you should be informed and you should not be fooled by an unclear video or by the statements of a handful of cowards hiding behind a keybord with false nicknames, thinking of themselves omnipotent. After all, lately there have been people who have pretended to be relatives of mine in order to discredit me, who wrote that they were there when the incident occurred – making up unreal details – or even suggested that l do not have any skills and that I ended up where l am by paying to compete.

I am just a guy chasing his dreams and l do it in a honest and fair way.