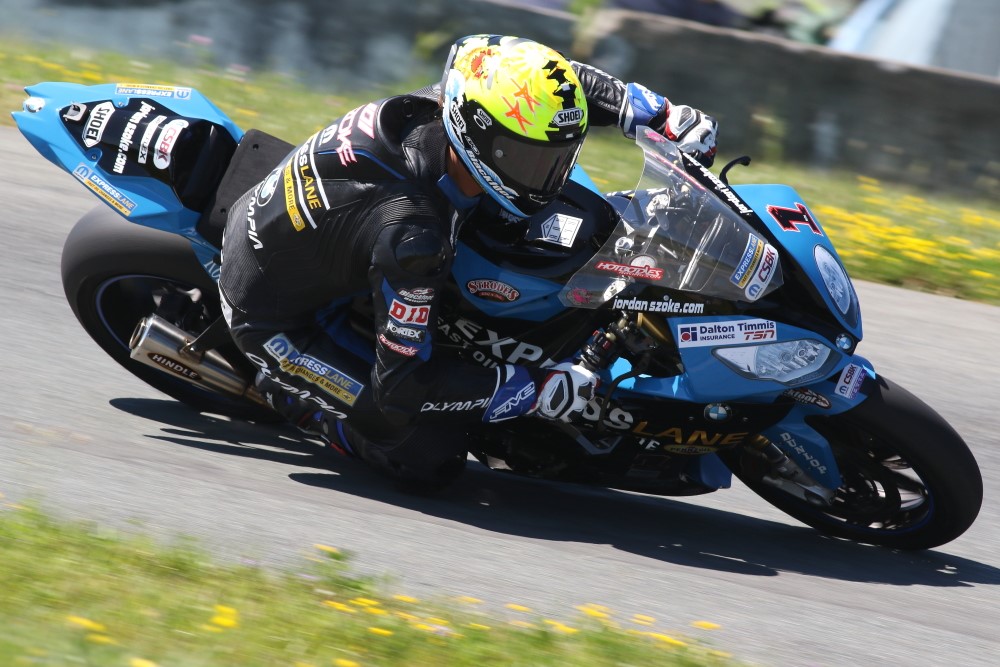 Shubenacadie, NS – July 20, 2018 – Three-time defending Mopar Pro Superbike champion Jordan Szoke will start from pole position for the ninth-consecutive year at Atlantic Motorsport Park after pacing the field on Friday at the fourth round of the Mopar Canadian Superbike Championship presented by Pro Cycle and Honda Canada.

Szoke, who has also won the last four races on the east coast, was fastest in the first qualifying session with a time of 1:08.417, before improving to a mark of 1:07.717 in the Dalton Timmis Insurance Top Ten Superpole event.

While that time is nearly a half-second off the pace from last year’s qualifying, Szoke acknowledged that it may make for a tighter field when the racing begins on Saturday.

“The track doesn’t feel as fast as it did last year, but that will probably mean a close, tough race tomorrow, which is great for the fans,” the Lynden, ON native said. “I knew we had an advantage because this is another track we do really well at, but I also knew Ben [Young] was strong here so I wasn’t shocked to see him so close to me.”

Szoke was also quick to praise his Mopar Express Lane BMW Motorrad S1000RR machine, as well as Dunlop tires and the BMW brand – which completed the podium for the third time in four events this season.

While Szoke was fair to say AMP is one of his better tracks, he was also correct to say the same of Young, who will look to continue his career-best season with a strong weekend after qualifying second-fastest.

The Scot-Build BMW rider out of Collingwood, ON finished third in both races at the Pro doubleheader one year ago but has so far taken second-place in every race this season, a trend he will look to snap by scoring his first career victory on Saturday.

“We got a couple [fast laps] in but we’re really working on our consistency for the race,” Young said. “I maybe could have pushed harder, but we’re ready for the long haul and everything’s working really well, so it should be a good race tomorrow.”

Rounding out the front row for Saturday’s start will be Beaconsfield, QC’s Michael Leon, who took a hard-earned third-place result in what was the best qualifying finish of his Pro Superbike career.

Riding a Royal Distributing BMW, Leon has finished inside the top-five in his last two races and will look to crack the podium for his first time this weekend as he continues to try and make up for a DNF in round one.

It was another disappointing qualifying result for St. Isidore, QC’s Samuel Trepanier, who will be forced to start from the second row in fourth aboard his Blysk Racing BMW.

However, it was just one round ago that Trepanier found himself starting from tenth after a grid penalty only to charge his way to the podium in third, meaning nothing is impossible for the third-year Pro as he looks for his first career victory.

Rounding out the top five is Mississauga, ON’s Trevor Daley, who represents the lone non-BMW on the front two rows as he continues to impress aboard the OneSpeed Chop Shop Kawasaki ZX-10R.

Notably, Daley experienced a massive crash at the end of the Superbike session and while he thankfully sustained no injuries, his bike may need extensive repairs to be race-ready for the weekend.

The other qualifying session saw local youngster Jacob Shaw-O’Leary claim pole position for the first time in his Pro career, as the hometown favourite out of Falmouth, NS narrowly paced the Liqui Moly Pro Sport Bike class with a time of 1:09.167.

Shaw-O’Leary, riding an O’Leary Brothers Racing Pro Cycle Honda CBR600RR, is making his season debut after missing the first three rounds due to injury. The 19-year old finished fourth and third at AMP last season and will look to build on that by scoring his first ever Pro victory this weekend.

“It’s really nice to be up at the front, especially considering how tough this season has been,” he said. “It would be even better to get a win tomorrow and put on a show for the fans, but it will be a good race either way.”

The second spot on the grid had appeared to be going to defending champion and fellow 19-year old Tomas Casas, but a last-lap charge by Sebastien Tremblay moved him into that position with just seconds remaining.

The Laval, QC native is coming off a second-place finish at his home track in round three and appears to have carried that momentum into the weekend, as the DB Moto Kawasaki ZX-6R Ninja rider searches for his first victory of the season.

As for championship leader and reigning title holder Casas, the youngster out of Peterborough, ON is hardly in unfamiliar territory, as he qualified third in round two at the Grand Bend Motorplex and went on to finish in second-place.

Casas finished second and first in his two races, respectively, at AMP a year ago, and has a strong chance of placing his Parts Canada Yamaha YZF-R6 in a similar position this weekend should he stay within striking distance of Shaw-O’Leary.

“It’s a bumpy track but it’s really fun. It really takes some getting used to because it’s so different [from the other tracks]” Casas said. “I think we’ll be fine. The goal is just to bring home as many points as possible, but it should be a good weekend.”

Starting from the front of the second row in fourth spot will be Lasalle, QC’s Samuel Desmarais, who is putting together an impressive rookie season aboard his Kawasaki ZX-6R Ninja.

The reigning Magneti Marelli Amateur Superbike champion will look to overtake at least one of the top three this weekend and score his first career Pro podium, having achieved a previous season-high of sixth in rounds two and three.

Rounding out the top five and completing the second row is Ripley, ON’s Mitch Card, who will need to make up some ground on the weekend if he looks to stick with Casas in the title fight.

Last year’s championship runner-up and this year’s round two race-winner, Card currently trails Casas by 18 points aboard his Fast Company Yamaha YZF-R6 and will try to erase that deficit with a strong weekend out east.

Wrapping up the day’s action was a number of practice sessions in the Amateur ranks, with all three classes showing glimpses of some unpredictable results.

Youngster Jake LeClair (Blackstock, ON) was fastest in the Amateur Lightweight Sport Bike morning practice aboard his Yamaha YZF-R3, while Princeville, NS’s Avery Hart topped LeClair in the afternoon session aboard his Kawasaki Ninja 250.

Meanwhile, it was Lower Sackville, NS’s Adam Singer who paced the first go-around in the Parts Canada Amateur Sport Bike class aboard his Yamaha YZF-R6, while 16-year old phenom Nicolas Meunier out of Verdun, QC led the second practice aboard his Kawasaki ZX-6R.

The weekend also features a pair of regional classes being hosted by the Society of Atlantic Roadracing League, which will run alongside the National classes in round four.

More information, including full results and the weekend schedule, can be found at the series’ official website at www.csbk.ca.