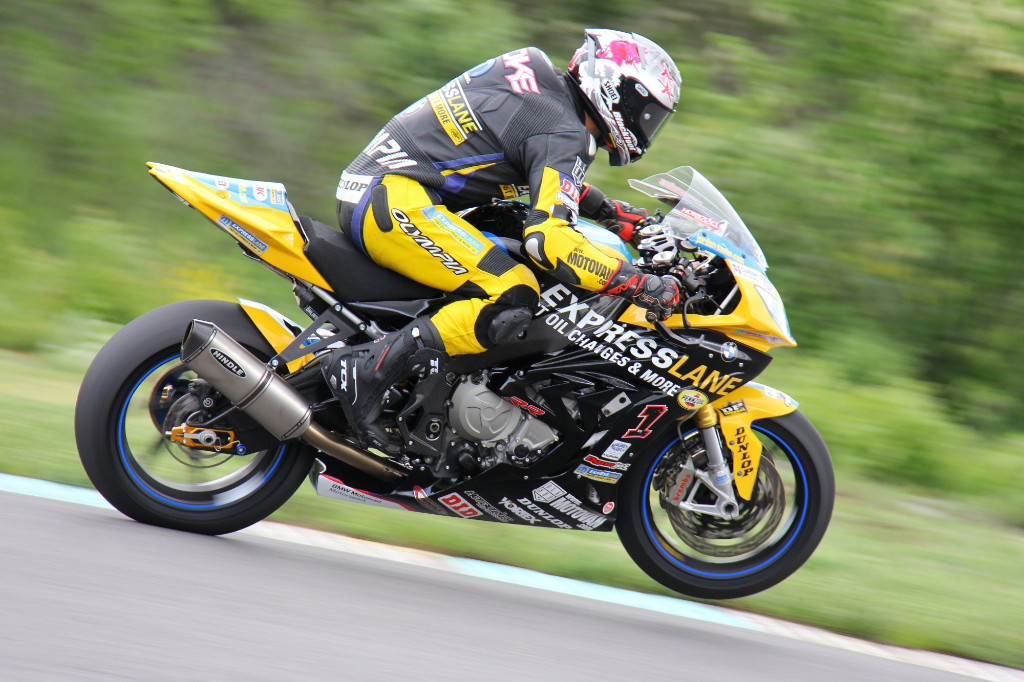 SZOKE BUT NO FIRE DURING CSBK PRACTICE AT SHANNONVILLE

SHANNONVILLE, ON (May 26, 2017) – Friday’s practice day at the CSBK Superbike Challenge presented by the Trenton MFRC was highlighted by the fast performance of two returning Pro racers before light but persistent rain forced an early end to the day’s sessions at Shannonville Motorsport Park.

Defending Pro Superbike champion Jordan Szoke topped the practice sheets in the feature class, but it was returning racer Andrew Nelson that served the biggest notice by taking the second spot after a five-year hiatus. Liqui Moly Pro Sport Bike practice was topped by Kristopher Garvie, also returning after more than a year away from the national tour.

Szoke’s 1:06.314-second lap aboard his Mopar Express Lane/Motovan BMW S1000RR came shortly before a light drizzle kept the Pro Superbike field in hot pit for more than half of the scheduled 50-minute session. Quality testing time has been in short supply this spring in Canada, and today’s best laps were not in the range of the 1:04.662 set by Riedmann during Friday practive at last year’s Shannonville opener.

“Our times were surprisingly good, especially on the medium tire,” acknowldged Szoke. “It was so cool today that we couldn’t run the soft (compound), so I was actually surprised at how everything felt.”

Szoke wasn’t thrilled about the damp conditions considering a limited test schedule during the preseason. “I could really use the seat time,” admitted the 11-time feature-class champ. “I didn’t get much testing in, and we had some bike issues at the last test, but all in all we’re really happy. We made some chassis improvements over the winter, and we felt really good today, so it’s looking positive.”

Nelson finished the second Pro Superbike session just 0.178-seconds behind Szoke on a brand-new Suzuki GSX-R1000. “Things went better than expected today,” admitted the former Shannonville national winner. “We changed a lot of stuff from last weekend – it’s no longer a stock bike – and it just worked better right away.

“For the last five years, I haven’t raced at all,” Nelson admitted. “I just hope my body can last over race distance. The handling of the bike is like something I haven’t really experienced before, and the power is stronger than I thought it would be. It feels like a 600 with a big engine in it.”

Edie, fresh off a Pro Superbike win at last weekend’s RACE SuperSeries regional at SMP, was 0.736 seconds behind Szoke with a 1:07.050 aboard his Z1 Tuning Yamaha R1M. “We had a good practice session this morning to get the blood flowing, but this afternoon we didn’t get too many laps in as it did start raining,” noted the Warman, SK racer. “We were still making a few big changes going into that last session, so it was really just about feeling it out.

“I had just pulled in to make another change when the rain came, but that’s how it is, and it’s the same for everybody. We’ll be ready for tomorrow morning. The guys have worked so hard the last couple of weeks making me feel comfortable on the bike, and it’s come a long way.”

Kenny Riedmann of Belfountain, ON took fourth on his Kawasaki ZX-10RR, 0.997 seconds behind Szoke. Collingwood’s Ben Young rounded out the top five in Pro Superbike practice with a 1:07.778 aboard his Scot-Build Developments BMW S1000RR.

In Pro Sport Bike, Garvie’s 1:08.332 put him at the top of the practice timing sheets at the conclusion of Friday’s action. No stranger to Shannonville’s Pro layout, Garvie felt comfortable on his Kawasaki ZX-6R despite a recent hiatus from racing.

“The goal was just to go out and have fun, and whatever happens happens,” admitted the Caledon, ON rider. “The bike was working really well; it was doing everything I wanted it to. The track was really green, so you had to be careful and do a lot of your braking straight up and down, but it was the same for everybody. We had fun and went fast at the same time. It was a good day.”