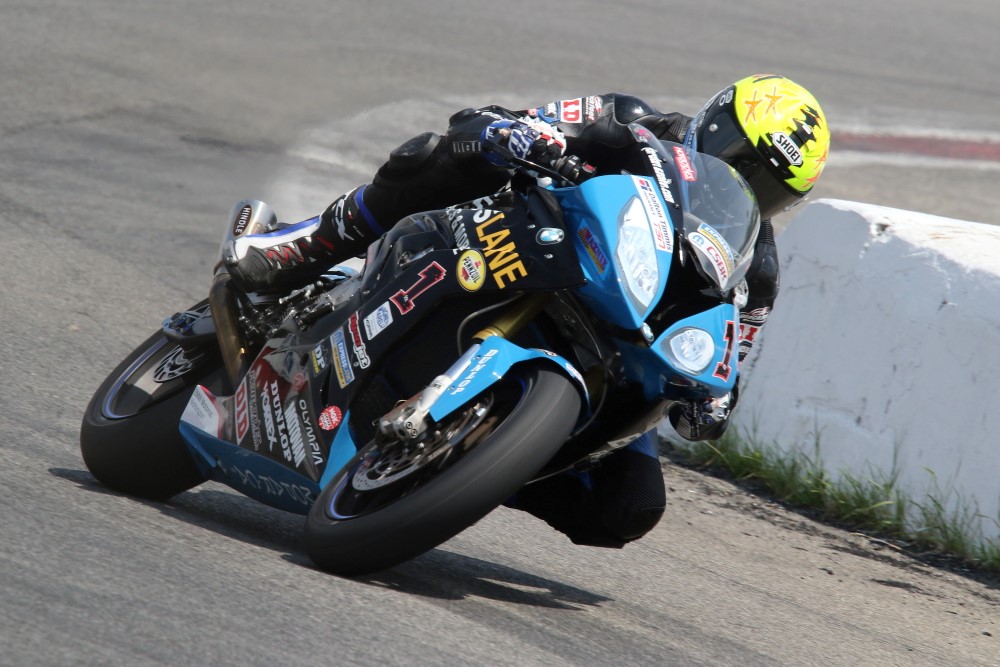 St-Eustache, QC – June 30, 2018 – Three-time defending Mopar Pro Superbike champion Jordan Szoke will start from pole position for the second time this season on Sunday, after pacing the field on Saturday at the third round of the Mopar Canadian Superbike Championship at Autodrome St-Eustache.

Young, piloting a Scot-Build BMW out of Collingwood, ON, failed to score his second consecutive pole position after grabbing the first of his career in round two at the Grand Bend Motorplex.

There will also be a non-BMW starting on the front row for the first time this season in the form of Mississauga, ON’s Trevor Daley, who qualified third aboard his OneSpeed Chop Shop Kawasaki ZX-10R.

Szoke (Lynden, ON) will look to score his eighth-consecutive victory on Sunday and third-straight to open the season, while also trying to keep his seven-year unbeaten streak at St-Eustache alive.

“We’re usually super strong here, but I was actually surprised to see how close it was,” Szoke admitted. “You can only go so fast here, so we’ve just been trying to do as many fast laps as we can. Hopefully we can get a good start tomorrow, but either way it should be a good race.”

Despite another front-row start, it was a frustrating result for Young, who came within inches of his first Pro win in round two after starting from pole.

“It’s tough,” Young said. “But Jordan’s always so fast here, and it’s only our third time here, so it’s nice to be so close. I think we’re going in the right direction.”

It was an inspiring performance for the Kawasaki of Daley, who has returned full-time to the series in 2018 after a brief hiatus. The former Amateur champion already has one Pro Sport Bike win to his name but will be searching for his first in the Superbike category on Sunday.

“It’s really great to be here,” Daley said. “I had really good track placement which helped me a lot. It was tough yesterday because of the heat but I was a little more comfortable today, and it should be fun tomorrow.”

Fourth in the SuperPole session was hometown rider Michael Leon out of Beaconsfield, QC, who will start on the second row aboard his Royal Distributing BMW alongside fellow BMW rider Jeff Williams from Inverary, ON.

Missing from the top five is St. Isidore, QC’s Samuel Trepanier, who set the fourth-fastest time aboard his Blysk Racing BMW but was unable to complete the mandatory post-tech Dyno session. As a result, the third-year pro will be forced to start from tenth for Sunday’s race.

The top rookie in the qualifying session – though he missed the cut for SuperPole – was Sainte-Brigide-d’Iberville, QC’s Ernest Bernhard, who will start from 12th in his first race of the 2018 season.

The 19-year old out of Peterborough, ON took the top spot aboard his Parts Canada Yamaha YZF-R6 after setting a time of 46.821 – just 0.022 seconds faster than Laval, QC’s Tremblay.

Riding a DB Moto sponsored Kawasaki ZX-6R Ninja, Tremblay will look to get his championship fight back on track on Sunday as he searches for his first career Pro victory at his home circuit.

Third-place in Saturday’s action went to last year’s championship runner-up, Mitch Card, though the Fast Company Yamaha rider crashed at the end of the session causing a red flag. The Ripley, ON native suffered a leg injury in the incident, but is not expected to miss any time moving forward.

As for Casas, the youngster will look to extend his championship lead with a victory on Sunday as he searches to defend his title from a year ago.

“Everything feels great. It’s really hot out there, but overall the track’s not too bad,” Casas said. “With these new [Dunlop] supersoft tires, you can really push it hard. The race should be a lot of fun tomorrow.”

The second row of the grid in the Sport Bike class will see St-Marthe, QC’s Louie Raffa look for his second career victory after capturing his first aboard his Honda CBR600RR in St-Eustache three years ago, while fifth-place qualifier David MacKay will attempt to get back in the title fight with a win after the Hamilton, ON rider crashed out of the last round aboard his Kawasaki.

Outside of the Pro ranks, it was undoubtedly the most exciting race yet in the brand new Amateur Lightweight Sport Bike class, as Laval, QC’s Alex Berthiaume managed to hand youngster Jake LeClair his first loss of the season on Saturday.

Each piloting Yamaha YZF-R3’s, the two riders went back-and-forth for much of the race before the Blackstock, ON native of LeClair had appeared set to win his fifth consecutive contest. However, a penultimate-corner pass from Berthiaume managed to unseat the 17-year old, ending his run of victories to begin the campaign.

There was similar drama in the battle for third, one which St. Thomas, ON’s Ryan White came out on top of aboard his Kawasaki Ninja 300, while fourth went to St. Jerome, QC’s Johann Plancque aboard the same machine.

In the rest of the Amateur action, it was a full display of local riders near the front, with Blainville, QC’s Guillaume Fortin grabbing pole in the Magneti Marelli Amateur Superbike class aboard a BMW S1000RR, while Mirabel, QC’s Luc LaBranche topped the Parts Canada Amateur Sport Bike division riding a Yamaha YZF-R6.

Full results from Saturday’s action can be found on the series’ official website at www.csbk.ca.