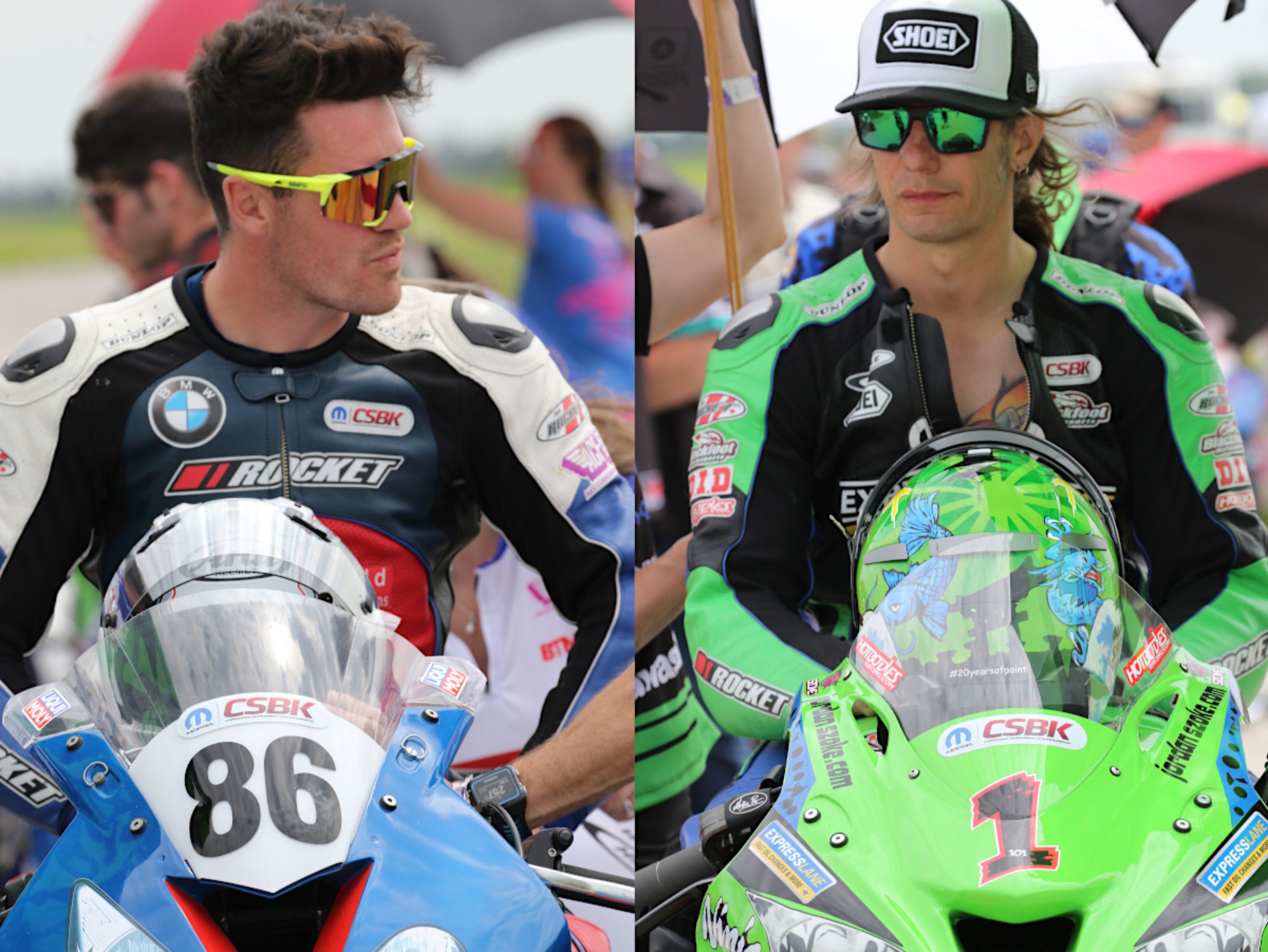 Young, Szoke preparing for pivotal round three at Autodrome St-Eustache this weekend

Toronto, ON – June 18, 2019 – The Mopar Canadian Superbike Championship will be heading to historic Autodrome St-Eustache for the final time this weekend, June 21-23, with a potential season-changing battle in store in the Mopar Pro Superbike class.

Barrie Trim/Scot-Build BMW S1000RR rider Ben Young currently leads the championship by 29 points over his rival Jordan Szoke, as the Collingwood, ON native has finished every session of the season on top of the leaderboard.

Young has looked a step ahead of the competition in his breakout season, as the first-time championship leader has the maximum number of possible points through two rounds with five races to go.

However, Szoke made things as interesting as they’ve been all year in the late stages of round two’s race, narrowly losing out on the victory aboard his Mopar Express Lane Kawasaki ZX-10R Ninja.

The Lynden, ON veteran will look to keep that momentum going at arguably his best track, as the three-time defending champion has won seven-consecutive races at the circuit and 10 of the last 12 races in the province of Quebec.

Szoke briefly battled with Young in St-Eustache a year ago before storming to a six-second victory, but all indications are that the two will combine for a much more thrilling contest in Sunday’s race.

The biggest question mark may be who will join the duo on the podium, with a handful of names proving themselves certainly capable so far this season.

The man to earn that honour in round two was OneSpeed/Fast Company Suzuki GSX-R1000 rider Trevor Daley, who rebounded from a tough opening round to claim his first podium since 2015. The Mississauga, ON native sits in a tie for sixth in the overall standings, a spot that hardly indicates his front-running ability.

Another name that has taken many by surprise so far this year is Peterborough, ON youngster Tomas Casas, who enters round three in a tie for third in the standings in his first year aboard his Parts Canada Yamaha YZF-R1. The reigning Sport Bike champion has yet to podium in the feature class, but finished fourth in round one and has typically excelled in La Belle Province.

Another fan-favourite to watch will be Verdun, QC teenager Nicolas Meunier, who currently leads the Brooklin Cycle Racing Pro Rookie of the Year standings aboard his Turcotte Performance Kawasaki ZX-6R Ninja. The tighter, narrower Autodrome is perhaps the track that is kindest to the lesser-powered sport bike, as the hometown youngster could be in line for his first career top-five finish.

Both Casas and Meunier will be at the forefront of multiple classes, however, with the two in line for what will certainly be a dramatic weekend in the Liqui Moly Pro Sport Bike category.

Casas got his two-time title defence back on track with a victory in round two, albeit after a protest determined the result, and will aim to win his third-consecutive race in St-Eustache and inch closer to the front of the standings aboard his YZF-R6 machine.

It will be a pivotal weekend for championship leader Will Hornblower, who carries a 17-point grasp on the series lead but has not raced at the Quebec circuit since 2015, when he finished seventh. The Sarnia, ON native may be in need of a top-five finish to retain his points lead, as the Yamaha rider is now under fire from Casas and company.

It’s expected that the Quebec round will not feature one of it’s most notable faces, as Sebastien Tremblay is recovering from a broken collarbone suffered in round two of the Sport Bike class. The Mirabel, QC native was widely considered a championship leader aboard his Turcotte Performance Kawasaki, but has had a season to forget with crashes in both of the first two rounds.

The biggest runaway class so far will feature a welcome dose of adversity in round three, as Avery Hart’s stranglehold on the TSN Motorcycle Experience Lightweight Sport Bike class will be put to the test in races five and six.

The Princeville, NS rider has looked dominant in his first full National campaign aboard his WRBF Racing Yamaha YZF-R3, leading the title fight by 41 points, but will face a tough challenge in hometown veteran Alex Berthiaume.

The Laval, QC native won the first of two races in St-Eustache a year ago, and has perhaps the best knowledge of the circuit aboard his Yamaha machine. Berthiaume sits fifth in the overall standings after a crash in round one, but rebounded with his first podium of the year in race two at round two.

The two Amateur categories will also feature a number of intriguing battles, with a large Quebec-based contingent set to make their gains at their home facility.

That may be most true in the Express Lane Amateur Superbike class, where current points runner-up Guillaume Fortin enters St-Eustache as the reigning race winner at the track after a thrilling victory last season. The Blainville, QC rider has been a step behind Markham, ON’s Dave Natale this season, but will look to finally even the field against the Aprilia RSV4RR rider aboard his Kawasaki ZX-10R Ninja.

As for the Parts Canada Amateur Sport Bike category, it will be a chance for Chambly, QC’s Christian Allard to extend his points lead at the same track he won at a year ago. Allard currently holds just a one-point lead over last year’s Lightweight champion Jake LeClair, but the Kawasaki ZX-6R Ninja rider will have the benefit of track experience over his younger bLU cRU Yamaha YZF-R6 counterpart out of Blackstock, ON.

Fans and riders are encouraged to attend what will be the final CSBK event at the Autodrome St-Eustache, before the 54-year old facility is shut down for good at the end of the 2019 season.

Information regarding round three, including the weekend schedule, can be found on the series’ official website at www.csbk.ca.