Canadian Superbike: Ben Young Is Victorious In Season-Opener At Shannonville

Canadian Superbike: Ben Young Is Victorious In Season-Opener At Shannonville 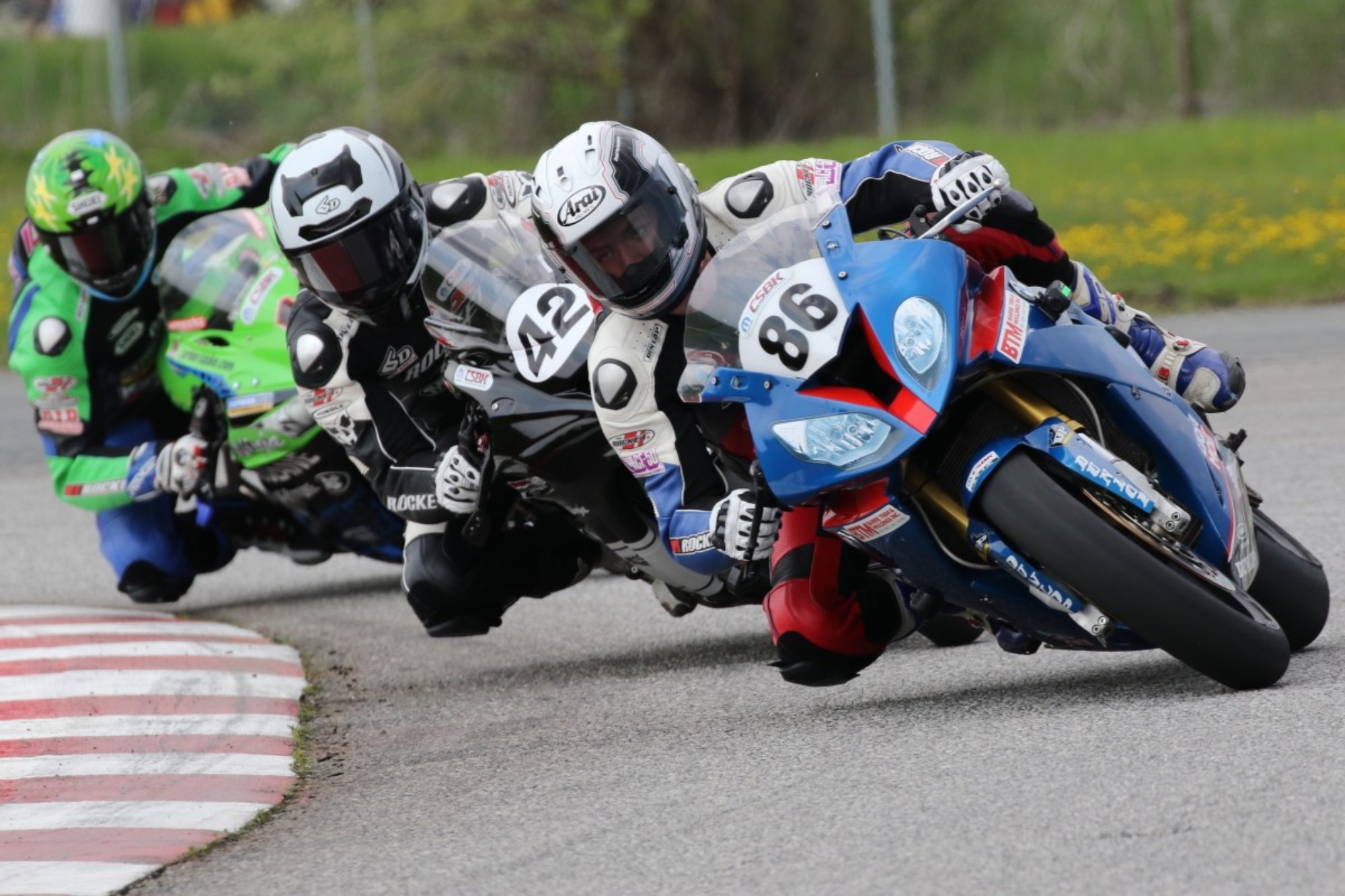 Shannonville, ON – The 2019 Mopar Canadian Superbike Championship got off to a much different start than years past on Sunday, with a pair of dramatic Pro races leading to some first-time championship leaders after round one at Shannonville Motorsport Park.

Ben Young completed the weekend sweep in the Mopar Pro Superbike feature class, as the Collingwood, ON rider led every session of round one before leading all 22 laps of the final race aboard his Scot-Build/Barrie Trim BMW S1000RR.

Despite his run at the top of the leaderboard, Young was under siege for the entirety of the race, holding off a pair of familiar foes in Kenny Riedmann and four-time defending champion Jordan Szoke.

“It feels really great. We had a great start, but I knew they were behind me the whole way, so I really had to push,” said Young. “It’s nice to see BMW continuing their run of wins here this season, and I’m just honoured to be a part of that, so we’re all looking forward to round two in a few weeks at Grand Bend.”

“I think it’s one of my better tracks, so to go in there with a points advantage over Jordan and Kenny is just a dream come true so far,” he continued.

It was another brilliant ride for Belfountain, ON’s Riedmann, who has now managed to edge his long-time rival in Szoke in back-to-back races after winning the season finale at Canadian Tire Motorsport Park last season, his lone career victory aboard the Sturgess Cycle Kawasaki ZX-10R Ninja.

“Jordan’s a 13-time champion, so obviously keeping him behind me was never going to be easy, but I was really trying to find a weak spot on Ben to make a pass and just couldn’t find one,” Riedmann said. “He put in a really fast lap at the end that I just couldn’t match, so I’m really glad to be here on the podium and fighting with these guys. It was a lot of fun.”

Szoke will now leave round one without the series lead for the first time in seven seasons, a race he also finished third in, though it was a spirited ride for the Lynden, ON veteran in his debut with the Mopar Express Lane Kawasaki team.

After a massive crash on Saturday morning, Szoke battled through a number of injuries to keep himself within the title fight early on.

“It was a real push to get the bikes together, and I was having a tough time fighting through the pain, so I knew I had to play it smart,” said Szoke. “It was a tough weekend, but the new team is a great fit. It’s not about every race, it’s about the championship, and we’ll be right back up there in round two.”

Taking a career-best result in fourth place was Peterborough, ON youngster Tomas Casas, who was racing aboard a Parts Canada Yamaha YZF-R1 superbike for the first time in his career this weekend, with St. Isidore, QC’s Samuel Trepanier also battling through injury to round out the top five aboard his Blysk Racing BMW.

The top rookie in the Pro Superbike class was Maple, ON’s Ivan Babic, who finished eighth aboard his BMW as he takes an early lead in the Brooklin Cycle Racing Pro Rookie of the Year battle.

It wasn’t as good of a result for Casas in the Liqui Moly Pro Sport Bike class, however, as a last-lap crash led to the first career Pro victory for Sarnia, ON’s Will Hornblower.

A frequent podium finisher, Hornblower finally managed to overcome a string of bad luck performances to win at SMP aboard his Yamaha YZF-R6.

“It’s really felt like a long time coming,” Hornblower said. “The past six years I’ve come so close, but to finally do it is just unbelievable. I can’t thank everyone enough.”

After running in third for much of the race, Hornblower had the front seat to a crash involving Casas and Mirabel, QC’s Sebastien Tremblay, with Tremblay leading the race at the time aboard his DB Moto Kawasaki ZX-6R Ninja.

“Tomas was faster in turn three so he tried to make the pass there, but Sebastien held the line and there was just nothing they could do,” Hornblower explained. “I just kept telling myself ‘you can’t screw this up,’ so I’m not glad they crashed but I’m just really glad I held onto it.”

Casas, the two-time defending champion in the Sport Bike category, will now enter round two at the Grand Bend Motorplex with just four points to Hornblower’s 52.

Also benefitting from the incident was Hamilton, ON’s David MacKay, who ran majority of the race in fourth before finishing in second place aboard his Mack Attack Racing Kawasaki. Rounding out the podium, meanwhile, was Lasalle, QC’s Samuel Desmarais, who had his best career finish aboard his Playground Poker Club Kawasaki.

After finishing second to Blackstock, ON teenager Ben LeClair in race one on Saturday, Hart was able to get his revenge over his Yamaha counterpart in race two.

“It was well worth the drive up here,” joked Hart. “That first corner really set the tone for the race, and it got really close out there but I was able to hold him off at the end and it was a lot of fun.”

As for the Parts Canada Amateur Sport Bike class, it was St. Marc-sur-Richelieu, QC’s Christian Allard dominating a shortened race aboard his Kawasaki ZX-6R Ninja, with Oakville, ON’s Jared Walker finishing second aboard a similar machine.

Walker was also the winner of round one’s Parts Canada Hard Charger award, improving upon his qualifying time by nearly 1.2 seconds in Sunday’s race.

Full results from Sunday’s racing at Shannonville Motorsport Park can be found on the series’ official website at www.csbk.ca, as well as information regarding round two at the Grand Bend Motorplex on June 7-9.

More, from a press release issued by Ben Young Racing:

YOUNG TAKES THE SWEEP AT THE OPENING ROUND OF CSBK

Collingwood, Ontario’s, Ben Young dominated the first round of the 2019 MOPAR Canadian Superbike Championship on board the Scot-Build / Barrie Trim BMW S1000RR. Young topped the time sheets in every session, and he maximized on championship points by taking pole position, leading every lap in the race and by winning the first CSBK round at Shannonville Motorsport Park.

Saturday, morning practice and qualifying brought slightly warmer conditions but a biting wind kept the track cool. With a few minor set up changes to work on, “The Flying Scotsman” put in a 1:05.695 lap time, 0.149 seconds ahead of fellow BWM rider, Micheal Leon in second.Afternoon Qualifying arrived with a sigh of relief, as in the morning practice Szoke had an off into turn 8, “Allan’s” where his ZX10R was launched into Pit Lane among race teams and awnings. Thankfully no one was injured.

The Qualifying was as thrilling as ever. CSBK runs a Superpole format, with a first 30-minute qualifying session for everyone, then the top ten fastest riders proceed into the 10 min Superpole session. This gives the teams 5 min to re-fuel, tire change and any make any final tweaks. Young was confident and determined to keep the top position. In his 3rd lap, he clocked a 1.05.025 lap which earned him his first pole position at Shannonville Motorsports Park. Concluding the front row grid line up was Jeff Williams (BMW) +0.038, Kenny Riedmann (Kawa) +0.184, and Szoke (Kawa) +0.192.

Race day bought the sun and heat for perfect race conditions. Morning practice again saw Young at the top of the time sheets, being 0.927 seconds in front of Szoke. It was ramping up to be an impressive first championship race.

Young got the hole shot into turn one with Riedmann and Szoke on his back wheel. The top three broke away with Young keeping ahead throughout the hard pressured 22-lap race. Both riders were on his heels all the way, in the hope he made a mistake. Each time the trio crossed the line, there was no more than 0.5 second covering the three of them. Young continued to lead every lap from the start and as ever, kept his nerve to take the chequered flag with Reidmann 0.677 seconds behind, and Szoke rounding out the podium.

Young said, “it’s an amazing start to the season. I knew I had the pace from the Friday, my team, Scott Cartier, Willy Vass and Steve Weir gave me an amazing bike over the whole weekend. In the race, I worked out it was Kenny and Jordan behind me as I saw their pit boards come up the same time as mine. It was a tough race with the boys being on my tail all the way, there was no rest. With two laps to go, I concentrated on my breathing to get my heart rate down, I got an incredible drive out the final turn going into the last lap and put my head down, I manage to pull a big enough gap to make sure neither Kenny or Jordan didn’t have the opportunity to draft on the back straight. Huge thanks for all my sponsors and BMW Motorrad Canada”.

The 25-year-old pilot of the #86 BMW S1000RR is also a proud “Laps for Muscular Dystrophy” (Laps4MD) rider who’s pledged to donate $1 for every lap he lead this season. These donations go to Muscular Dystrophy Canada to help make a difference in the lives of over 50,000 Canadians affected by a neuromuscular disorder.

To keep up-to-date on Ben Young throughout the year visit; www.BenYoungRacing.com, www.facebook.com/BenYoungRacing and on Twitter and Instagram: @benyoung_86.