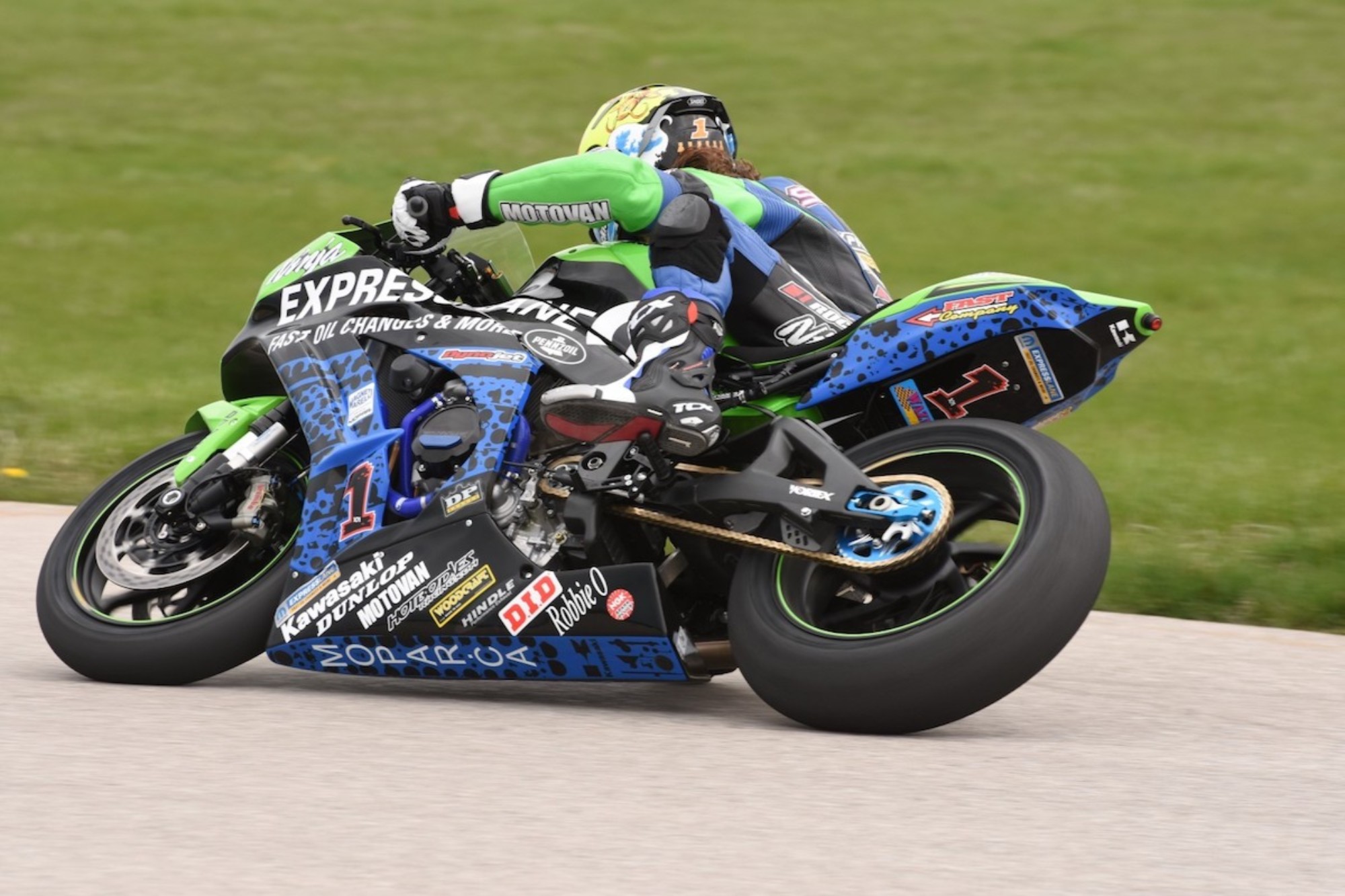 Toronto, ON – May 14, 2019 – Some things may look or feel different for Jordan Szoke this season, but the goal is all too familiar as the season opener approaches for the 2019 Mopar Canadian Superbike Championship at Shannonville Motorsport Park.

The Lynden, ON veteran will enter the new year as undoubtedly the most decorated Canadian roadracer of all time, having secured his record 13th Mopar Pro Superbike National overall title last season and fourth consecutive.

However, if Szoke plans to add to his trophy case yet again this year, he will have to do so aboard a new machine after his eight-year partnership with BMW came to an end this offseason. Instead, “The People’s Champion” will be returning to his roots with Kawasaki support, riding a Mopar Express Lane-sponsored ZX-10R Ninja much like the one he dominated with in the late 2000’s.

The reason for the added pressure in 2019 is not just his switch to a new team, but also the emergence of his biggest rivals late in the 2018 season. After seeing his perfect season snapped during last year’s season-ending doubleheader, Szoke failed to even stand on the podium in the final race, finishing fourth.

The winner of race one from that weekend will almost certainly be his biggest challenger in Ben Young, who will take over as BMW’s new leading man after Szoke’s departure. The Collingwood, ON rider is coming off his best season to date and will look to build upon his first career victory aboard a Barrie BMW Scot-Build S1000RR.

Young won’t be the only rider aiming for Szoke’s title, however, with St. Isidore, QC’s Samuel Trepanier poised for his best season as a Pro after finishing third overall a year ago. The Blysk Racing BMW rider is long overdue for his first career victory and it’s possible that result could finally come at the season opener in Shannonville.

Another bet to run near the front is Mississauga, ON’s Trevor Daley, who will also be piloting a new machine this season as he becomes the official factory Suzuki rider in 2019. After finishing fourth in last year’s championship aboard a solo Kawasaki effort, the former Amateur champion will now receive a massive boost as he switches to a Fast Company GSX-R1000RR.

One entry to look out for in Ontario rounds is Belfountain, ON’s Kenny Riedmann, who is planning to ride a partial program in 2019 aboard a Sturgess Cycle Kawasaki after winning his first ever Pro Superbike race at C.T.M.P. last season.

Arguably Szoke’s biggest rival for a span of three seasons, “Kenneth the Menace” is a safe bet to challenge for another National win.

A popular race within the race to follow will be the fight for this years Brooklin Cycle Racing Pro Rookie of the Year award, with teenage phenom Nicolas Meunier the early favourite after an impressive Pro debut at SMP’s regional race in early May.

The Verdun, QC youngster finished second in the Parts Canada Sport Bike standings a year ago and was the top middleweight rider in the Amateur Superbike class, finishing fifth overall aboard a Turcotte Performance Kawasaki ZX-6R Ninja.

As for the Liqui Moly Pro Sport Bike class, it will be up to Tomas Casas to defend his title against a field of worthy competitors, though the 19-year old Peterborough, ON native will be tough to beat at his home track in round one.

The Parts Canada Yamaha YZF-R6 rider will also be riding an R1 machine in the Superbike class for the first time but his focus remains on Sport Bike, where he will search for his third-consecutive title in 2019.

With the runner-up of the last two years, Mitch Card, not expected to compete this season, Casas’ biggest challenge will almost certainly come in the form of Mirabel, QC’s Sebastien Tremblay.

Tremblay won his first ever Pro race last year aboard a DB Moto Kawasaki ZX-6R Ninja and has looked strong in the preseason, besting Casas in regional racing at SMP a few weeks ago.

Meunier, the aforementioned rookie, should also be a strong front-runner aboard his Kawasaki in his first year of Pro racing in what is turning into a class loaded with strong, young talent.

Last year’s BCR Pro Rookie of the year, Samuel Desmarais of Lasalle, QC, will return with a strengthened Kawasaki program aiming to join the lead pack. Will Hornblower is returning to the series full time and has frequently diced with Casas at the front of Sport Bike, the Sarnia, ON. racer also on a Yamaha YZF-R6.

The most exciting display of young talent, however, is certainly the Amateur Lightweight Sport Bike class, which will feature the biggest rising stars in Canadian racing once again after a terrific inaugural season in 2018.

The two preseason frontrunners also happen to be two of the youngest riders in the National paddock, with Blackstock, ON’s Ben LeClair leading the way at just 15 years of age. The Yamaha YZF-R3 rider is the younger brother of last year’s champion, Jake, and will be looking to follow in his footsteps this season.

However, it won’t be without a strong challenge from Bowmanville, ON’s Matthew Simpson, who will also enter the year at just 15 years old aboard his Honda CBR500R. The youngster gave LeClair a strong run at the regional opener at SMP and will likely find himself at the centre of a title fight that comes right down to the season finale.

Also returning to the class is Laval, QC’s Alex Berthiaume, who finished second in last year’s championship and will be aiming to take the title aboard his Yamaha this season.

While the younger LeClair will aim at one Amateur championship, his older brother will have his sights set on at least another as Jake moves bigger machinery in 2019.

Now riding a bLU cRU Yamaha YZF-R6, LeClair should be a contender as early as round one at SMP after a strong showing at the circuit earlier this month. Riding in both the Parts Canada Amateur Sport Bike and Mopar Express Lane Amateur Superbike classes, the teenager could join Meunier and Casas as recent examples of one-year amateurs who fast-tracked their way to the Pro classes.

Though he has yet to make his National debut, another favourite to win the season opener would be Jordan Royds, who has won the last two regional races at SMP dating back to last season aboard his Yamaha YZF-R1.

As for LeClair’s biggest foe in the Sport Bike category, it may be the year for Ottawa, ON’s Max Kathron to find his footing and graduate to the Pro ranks.

Riding a Suzuki GSX-R600, Kathron has been amongst the fastest riders in the class for the last three seasons but settled for fourth in the standings last year after battling inconsistency down the stretch, though his best result did come at SMP when he finished second in the season opener.

Information regarding the CSBK season and its first round at SMP, including the full weekend schedule, can be found on the series’ official website at www.csbk.ca.