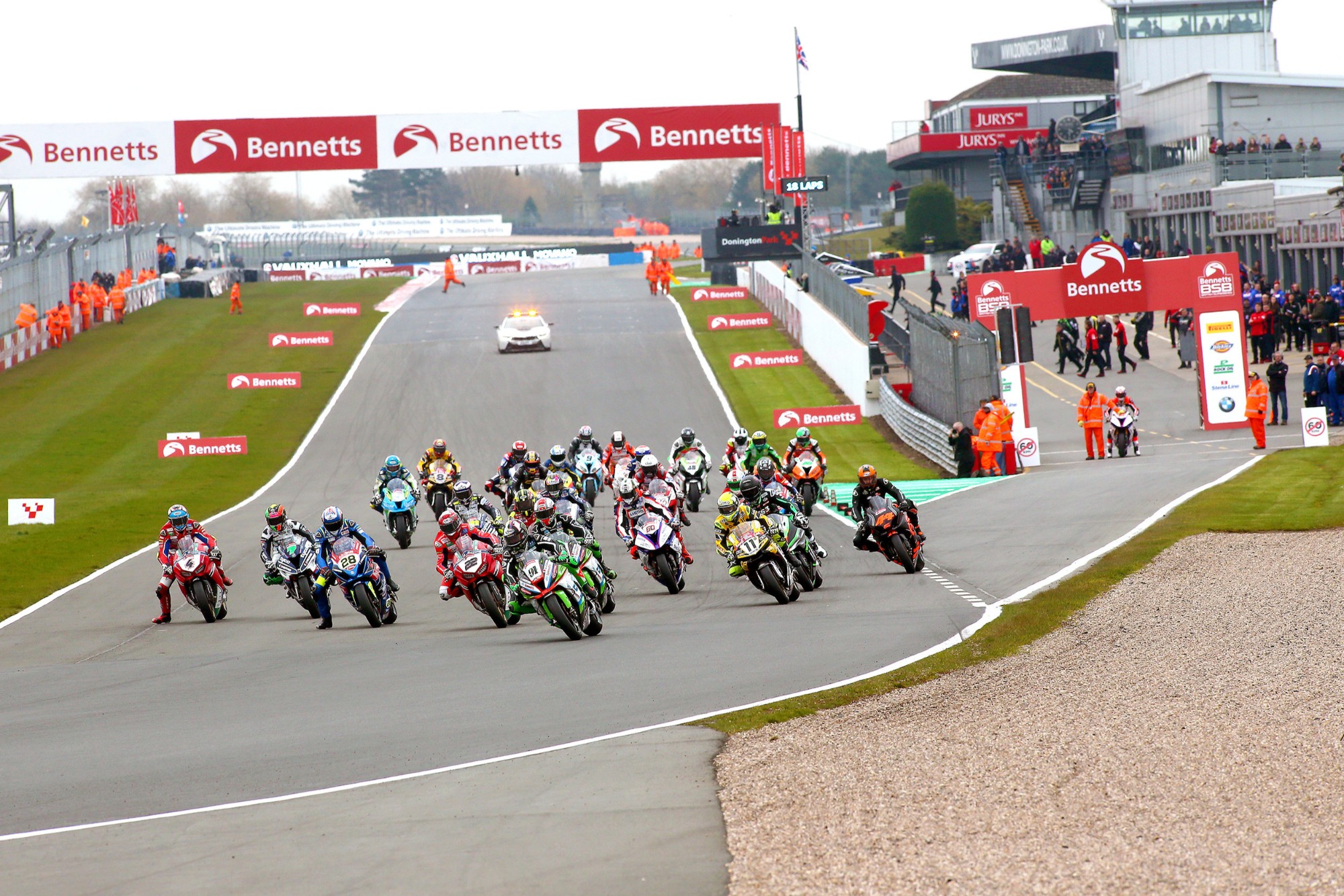 National lottery: New layout but who will hit the jackpot at Donington Park triple-header

The battle continues in the Bennetts British Superbike Championship this weekend (May 24/25/26) as the Donington Park National circuit returns to the calendar for the first time since 2002 for the first triple-header of 2019 with Tarran Mackenzie and Tommy Bridewell jointly at the top of the standings. 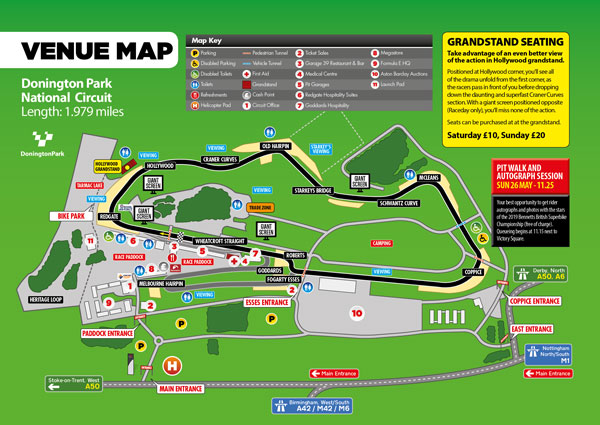 (Above) A map of Donington Park showing the 1.9-mile National layout that will be used this coming weekend.

The Leicestershire circuit’s National layout makes a welcome return this weekend for the championship’s first visit of the season to Donington Park, and with three races the stakes are high – there have been three different winners from the opening four races.

Mackenzie and Bridewell arrive at Donington Park equal on points at this early stage of the season. Ashby-de-la-Zouch resident Mackenzie is gearing up for his home round this weekend, and after a debut victory at the opener he is gunning for a return to the podium.

Bridewell meanwhile scored his first podium finish of the season last time out at Oulton Park which launched him up the order, but the Oxford Racing Ducati rider admits he knows he needs to start winning races again.

Danny Buchan has been the most consistent podium finisher so far, standing on the podium after three of the opening four races and the FS-3 Racing Kawasaki team is pushing for its first victory. If the Essex contender can pull off the feat this weekend, he could become the 50th different race winner in Bennetts BSB history.

Josh Elliott was a Silverstone race winner as both he and the OMG Racing Suzuki team scored their first win in the Superbike class and he holds a narrow two-point advantage over Josh Brookes, as the 2015 champion’s confidence rides high after his double win last time out in Cheshire.

Former MotoGP contender Scott Redding currently holds the final place in the top six and the Be Wiser Ducati rider is ready to battle for his first race win in the championship at a circuit where he previously won in Grand Prix racing, beating Mike Di Meglio and Marc Marquez in the 2008 125cc GP race.

This weekend also marks the debut of another former MotoGP rider as Hector Barbera, winner of the 125cc GP race at the 2003 British Grand Prix at Donington Park, joins Quattro Plant JG Speedfit Kawasaki alongside Glenn Irwin, deputising for the injured Ben Currie.

Honda Racing’s Andrew Irwin, Luke Mossey for OMG Racing Suzuki and McAMS Yamaha’s Jason O’Halloran are just outside the all-important top six after the opening races and they will be pushing for their first podium of the season. Meanwhile, Keith Farmer leads the BMW charge as the reigning Pirelli National Superstock 1000 champion bids for the first podium finish for the new S 1000 RR.

Bradley Ray will be aiming to kick-start his season this weekend after a challenging start. The Buildbase Suzuki rider took an incredible double win at Donington Park last year, claiming his first victory in Bennetts BSB, so will be looking for a repeat performance to launch himself back up the order.

“I am ready for the weekend! Silverstone was a near perfect weekend to start the season and then Oulton Park was more difficult, but we were getting better throughout the weekend, so to leave there and go to Donington still leading the standings was good.

“I definitely want to be back at the front and fighting for wins and podiums again. The last time I raced on the National circuit was in a club race on a 125 in 2010 so I have a feeling a lap on the Superbike will feel a lot different to that! I think this track should make some exciting races and it should suit the Yamaha and we can have a good weekend.

“I can’t wait for the three races; I always find the triple-headers more exciting as you have to be on it from the start of the weekend because the first race always seems to come around faster. Hopefully we can have a good round as we only live down the road! ”

“I have to be honest, if I get asked if this is where I would expect to be ahead of Donington Park I would say I fully expected to be fast from the start, but that is probably more of a confidence thing as you never quite now what will happen.

“That’s the monkey off my back with the first podium of the season at Oulton Park. It has been a very good start to the season but we need to keep pushing. We have a good base setting that I am really happy with as we can go that if we need to and what we have been learning from the bike is actually really interesting.

“I think that the National circuit layout should help us; in the past I have always lost time out of the Esses and the Melbourne Loop and it usually took me most of the weekend to get it right! The knowledge we have now and the characteristics of the bike I am hoping will make this a good weekend for us.

“I need to start winning more races, there is no question about it. At Oulton Park we just didn’t hit the nail on the head with the set-up as quick as Josh, but at the end of race two we knew what we needed to do. The goal is simple; we are going to Donington Park to fight for the win. I believe Scott and Josh will be fast there but I am happy that there are three races this weekend and I feel ready for it.”

“Donington Park is a circuit that should suit me a little bit better even though I enjoyed Oulton Park so much, going to Donington is a more Grand Prix style track so a little bit more like my habitat and what I am used to! Obviously there are three races there so I think it is a good chance for me to bag some more points to get up in the championship a bit more and close the gap to the leaders.

“I am really looking forward to it as I have great memories there; I won in 2008 and I got a podium in 2009 so I am looking forward to a good weekend. I rode the track on a street bike and just felt good to be there. The track looked quite a lot different as to 2009, which was the last time I had ever been to Donington Park until this week so it was like a newbie again to me.

The track was a lot of fun and I can’t wait to get out there and see what we can do. I want to try and get my first win of the year at Donington Park – that is my goal and I think that is realistic so we will be working hard to achieve that.”

American Mikey Lou Sanchez On The Podium Again In Spain