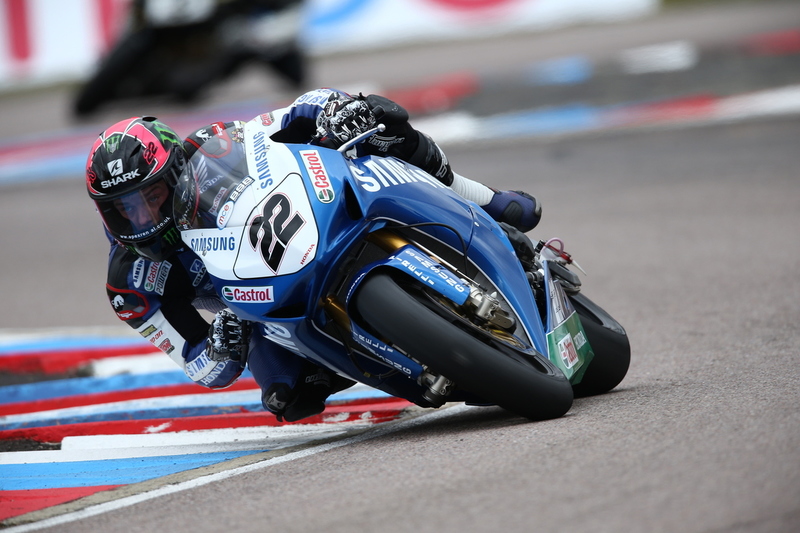 Results for other American riders competing at Brands Hatch:

Jayson Uribe was 20th out of 27 riders in Monster Energy British Motostar free practice two. Uribe did a lap of 1:39.238 on his Cresswell Racing Honda compared to the fastest time of 1:29.965, which was recorded by Joe Francis.

More, from a press release issued by MotorSport Vision:

LOWES DIALED IN AT THRUXTON AS JACOBSEN IMPRESSES TO CLOSE IN Results Free practice one: 1:Alex Lowes (Samsung Honda) 1m:21.626s 2:Keith Farmer (Rapid Solicitors Kawasaki) +0.685s 3:Jakub Smrz (Padgetts Honda) +1.006 4:Josh Brookes (Tyco Suzuki) +1.090s 5:Shane Byrne (Rapid Solicitors Kawasaki) +1.167s 6:James Westmoreland (Buildbase BMW) +1.571s Free practice two: 1:Alex Lowes (Samsung Honda)1m:16.412s 2:PJ Jacobsen (Tyco Suzuki) +0.294s 3:Shane Byrne (Rapid Solicitors Kawasaki) +0.378s 4:Josh Brookes (Tyco Suzuki) +0.602s 5:Jakub Smrz (Padgetts Honda) +1.065s 6:Michael Rutter (Bathams Honda) +1.067s Report Alex Lowes quickly got dialled in to the changeable free practice conditions at Thruxton ahead of the second round of the MCE Insurance British Superbike Championship, setting the pace in both free practice sessions. The Samsung Honda rider goes into the races at the Hampshire circuit trailing the reigning champion Shane Byrne by just a single point and feels that he is well prepared to maintain the momentum that took him to a pair of second places in the opening round. “It’s good to be fastest in both the wet and the dry, particularly the latter when I had a good run with the bike working well, though we still have some work to do,” said Lowes. “I enjoy this track with lots of sliding around because you have no traction control, it is real fun. It is enjoyable and though the times are good, it is what happens on Sunday that matters and that is what I am working towards.” Lowes was 0.378 seconds faster than Rapid Solicitor Kawasaki’s Byrne in third, who was happy enough with the outcome of his first day at the Hampshire circuit: “We wanted to do a long run, more than a race distance and we’ve done that and it was pretty good. We have a lot of good information to use now over the rest of the weekend.” Upstaging some of his more experienced rivals was American hot shot PJ Jacobsen, riding the Tyco Suzuki, who split the two early season title protagonists at the top of the leaderboard, with a best lap of 1m 16.706secs as he rode the circuit for the first time. “I’m very happy with this,” said Jacobsen. “The track is fantastic, suiting my style, as it is fast flowing and I have learned a lot so now I am aiming for at least a top ten finish, but I am taking it step by step.” Aussie Josh Brookes, aboard the second Tyco Suzuki, set the fourth fastest time running half a second fastest than former World Superbike rider Jakub Smrz on the Padgetts Honda with Michael Rutter sixth fastest on the Bathams Honda.

More, from a press release issued by Milwaukee Yamaha:

WATERS CONFIDENT ON THRUXTON DEBUT AS MILWAUKEE YAMAHA RETURN TO ACTION The Milwaukee Yamaha team got the second round of the MCE Insurance British Superbike Championship underway at Thruxton as the opening two sessions took place in contrasting conditions. Josh Waters ended seventh fastest on his debut at the track whilst James Ellison’s positive progress was later hampered by a technical issue which left him seventeenth fastest. The opening session took place in wet conditions and Ellison and Waters headed out on track together with the pair riding in formation in eighth and ninth respectively. In the afternoon the track dried out with Waters setting the seventh fastest time, whilst Ellison’s early progresses was halted with a technical issue which the Milwaukee Yamaha team are now working to overcome ahead of tomorrow’s Datatag Extreme Qualifying session. Ellison said: “Today we had a tough afternoon as we had some issues and we are now figuring out what the problem was as we seemed to be struggling with power. Whenever we accelerated it felt like we were starting from scratch, so the boys in the garage are working on that now and I am sure that we should then be set for the morning. Tomorrow is another day; we have qualifying to look forward to and hopefully we can get a good position for the Milwaukee Yamaha team.” Waters said: “Today was better for me than the first day at Brands Hatch and it all came together faster for me here. I had a lot to learn having never seen the track before, but we had better conditions than at Brands Hatch with the track temperature so I think that helped me. I am feeling more prepared and we will see how tomorrow goes but overall I am happy with how it has gone so far and looking forward to qualifying tomorrow.” For more information visit www.milwaukeeyamaha.com

Mikey Lou Sanchez is proving to be a front...
Read more
Load more