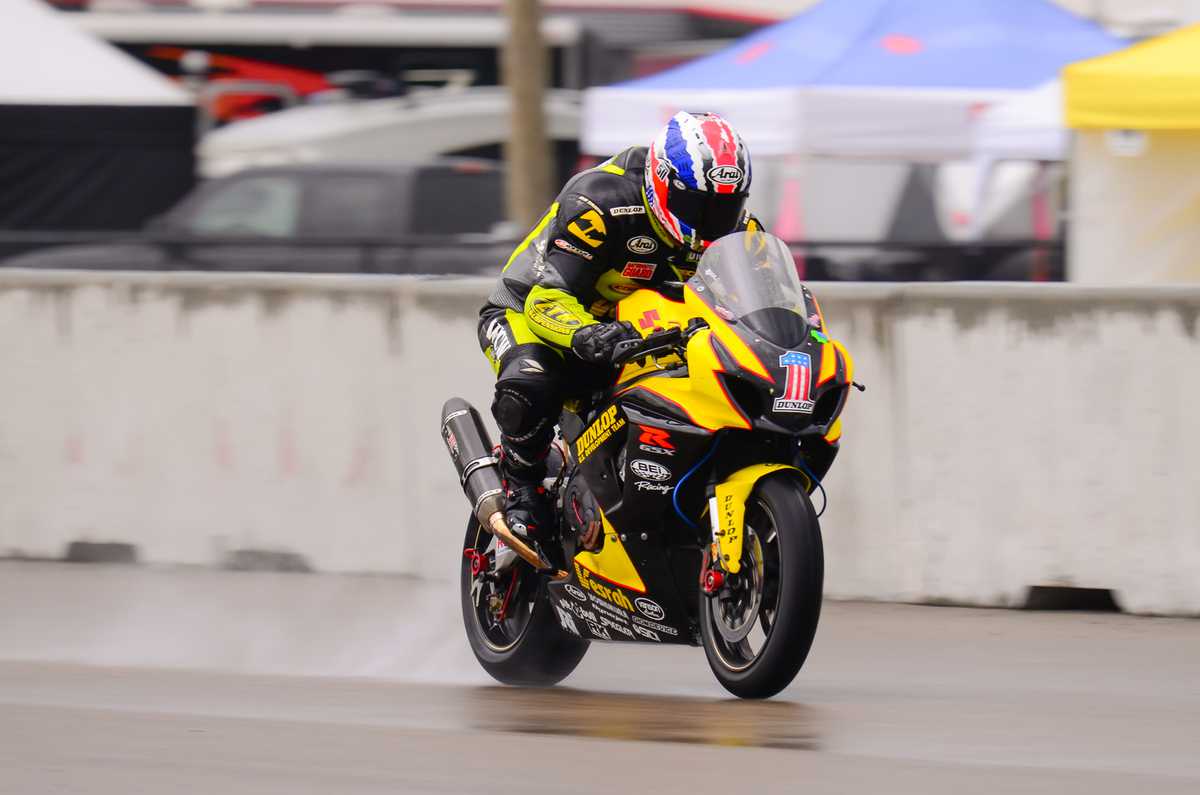 BEi RACING / DUNLOP DEVELOPMENT BACK ON TOP OF THE PODIUM AT ROUND 2 OF THE WERA / U.S. NATIONAL ENDURANCE SERIES.

BEi Racing / Dunlop Development regained the top step of the podium with a win at round 2 of the WERA National Endurance series and the U.S. National Endurance Series presented by Lucas Oil Products held at NOLA Motorsports Park in Avondale, LA on May 5th. Tricky conditions at the start of the race had the team debating which tires to use and deciding to go with the US made Dunlop N-Tec slicks that the team helped to develop instead of treaded D-211 GP-A N-Tec tires. This proved to be the right decision with the track quickly drying and staying that way for much of the race.

The team ran just out of the lead in 3rd and then 2nd place as the race settled in and Dustin Dominguez, Tim Bemisderfer and Sean Dwyer all got their first stints under their belts and then after the halfway point, moved into the front after misfortune struck the leading machine. Great pit stops and strong riding kept the Suzuki GSX-R 1000 out front when inclement weather then forced a stop to switch to full rain tires. BEi Racing / Dunlop Development kept the lead after this round of stops and with the race red flagged for lightning / severe storms slightly short of the scheduled 6 hours and called complete, finished with a 2 lap advantage taking the win both Overall and in the Heavyweight class. The BEi Racing / Dunlop Development Team now enjoys a slim 4 point lead in the 2014 Endurance Overall Championships.

“It was great to get the win in the 2nd round of this new endurance series and move into the lead for the Championship. I have to thank Dustin, Tim, Sean and my crew for their efforts, especially Craig ‘Huey’ Stewart from Marietta Motorsports for all of his help. I’m looking forward to Round 3 at Hallet Motor Racing Circuit at the end of May.”

“I’d like to thank the BEi / Dunlop Development Team for giving me this opportunity to ride with them this year. I was in a weird zone during my second stint and just found myself smiling and remembering that this is what I love to do! Huge thanks to Dustin, Tim and Billy for riding awesome and bringing home the win while I drove back to Florida to do some more racing and get on the podium in the Shootout at Jennings GP on Sunday! I’m digging the endurance racing and stoked to be on US Made Dunlop Tires that allow fast consistent laps forever.”

BEI Racing/Dunlop Development took the win with their Dunlop-shod Suzuki GSX-R1000 at the U.S. National Endurance (USNE) presented by Lucas Oil and WERA National Endurance 6 Hour Endurance race this past Saturday, April 5. The combined second round for both events brought the racing action to the NOLA Motorsports Park in Avondale, LA. The weather started cloudy and cool, with rain coming in on a stiff wind, and the track conditions were challenging on the 2.75 mile full course.

The 6 Hour Endurance race had a combined grid of 16 teams, with classes including Heavyweight, Middleweight, and Lightweight Endurance. When the green flag dropped at 11:16 a.m., the KTM RC8 mounted P1 Racing KTM team of Christopher Fillmore, Ty Howard, Eddie Thornton, and Derek Wagnon grabbed the early lead of the field with the Suzuki GSX-R1000-mounted BEI Racing/Dunlop Development team of Dustin Dominguez, Sean Dwyer, Billy Ethridge, and Tim Bemisderfer hot on their heels. The BMW S1000RR mounted Army of Darkness team had their hands full dealing with the Village Idiots on a Yamaha YZF-R6 and Fast Frank Racing aboard a Ducati 848.

For the first three hours, the track continued to dry out, and the lap times dropped as the P1 Racing KTM team held onto their lead and stretched it out to 2 laps ahead of second place BEI Racing and the third place Village Idiots. Halfway through hour 3 of the race, the KTM threw a valve, and P1 Racing pulled in with a mechanical. BEI took over the lead, with the Village Idiots peppering their tail section as the next storm front moved in. Heading towards hour 5, the skies opened up, first with a splattering of rain drops, then it started coming down hard. The field pulled in for pit stops, switched to rain tires, and continued racing. The tire swap to rains and how comfortable riders are on them would definitely test the running order. The race leaders retook the field without missing a beat, with Babuska Racing team of Frank Babuska Jr, Mark Junge, and Jimmy Merck on a Suzuki GSX-R600, and the Yamaha YZF-R6 mounted Locomotion team Alonzo Contreras, Ryan Max Johnson, and Matt Vastine the next fastest off the pit stop battling for third.

In addition to Lucas Oil, the USNE would like to thank its other sponsors: M4 Exhaust Systems, Driven Racing, and Saddlemen.

For a complete list of the weekend results and standings, please visit the website: www.CMRAracing.com, www.WERA.com, www.CMRAracing.com, The next endurance round in the USNE/WERA season will be on May 16-18, 2014, at Hallett Motor Racing Circuit, Hallett, OK. Saturday will be the 6 hour National Endurance race, and will be a combined round with CMRA. Details for the weekend will be announced when finalized. Come out and see some great endurance racing action!