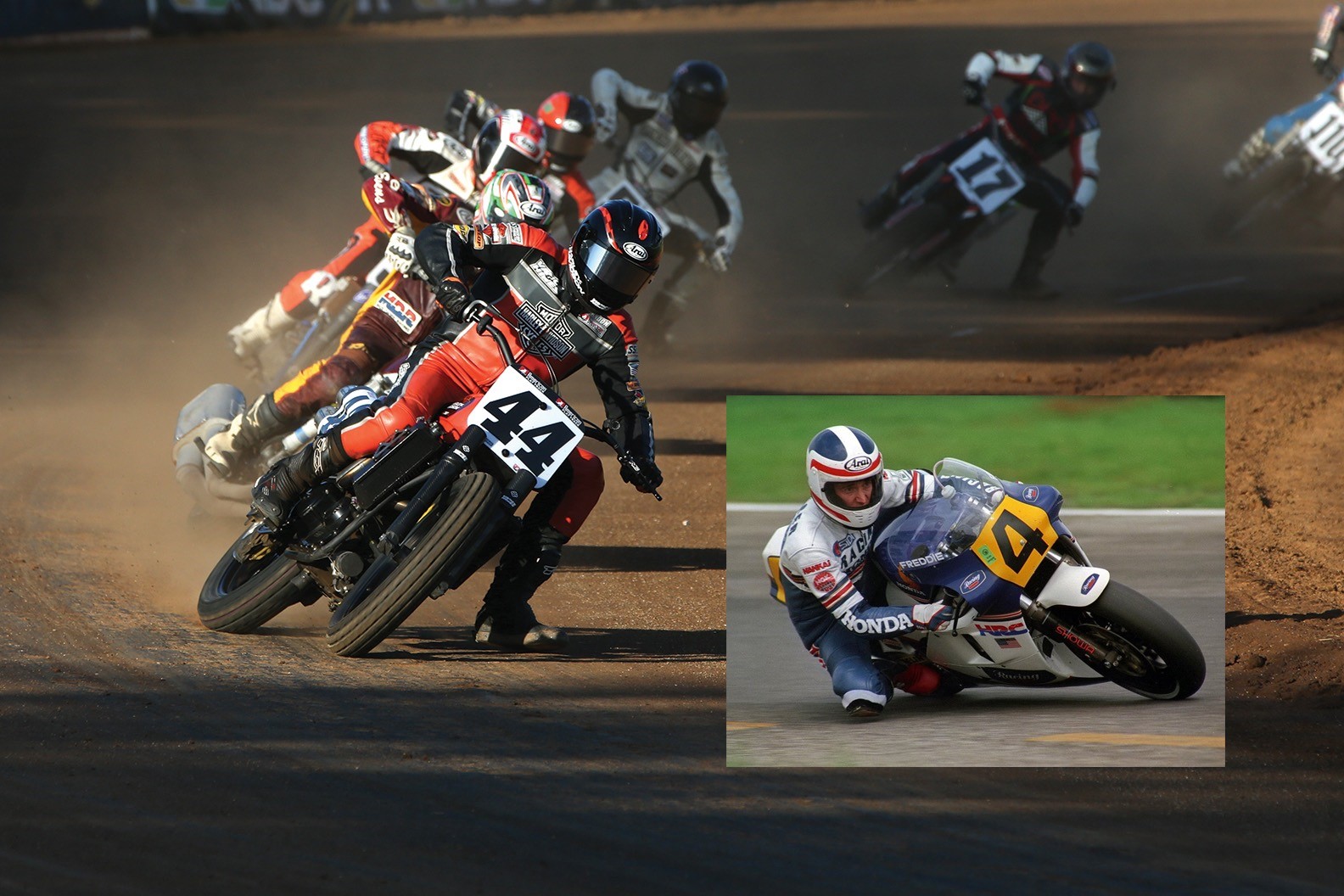 DAYTONA BEACH, Fla (March 1, 2018) – American Flat Track (AFT) is excited to announce a partnership with Arai Helmet, Inc. for 2018, making the industry leader in head protection the official helmet of the AFT series as well as a sponsor of two of the sport’s key events: the season-opening round at Daytona International Speedway on March 15 and the season finale at Meadowlands Racing & Entertainment on October 6.

In addition, 40-year Arai factory athlete and 3-time World Grand Prix Champion Freddie Spencer has been confirmed as the Grand Marshal of the Harley-Davidson TT presented by Russ Brown Motorcycle Attorneys at DAYTONA on March 15.

“As a flat tracker in my early racing days, and a past winner at Daytona, I’m honored to be named the Grand Marshal of American Flat Track’s season opener,” said Spencer. “And to do it alongside Arai, a wonderful partner of mine for four decades, makes it even better.”

With a six-decades-long commitment to peerless design and rider safety, Arai helmets are built by riders, for riders. Mitch Arai, who inherited the company from his father a little over 40 years ago, set about designing helmets that offered riders more protection and the very best in leading-edge design. The brand is recognized as one of the premier helmets in the world.

“Arai has been at the forefront of helmet technology and rider safety for decades,” said Michael Lock, CEO of American Flat Track. “We’re thrilled to have their design expertise and deep technical know-how in our paddock.”

Arai has deep roots in racing, and its helmets are worn by many of the top athletes in both the two- and four-wheel racing worlds. Arai has supported generations of flat track racers over the decades and is excited about the opportunity to increase its support as a series sponsor of American Flat Track, the fastest growing sport on two wheels.

“Over the past four decades Arai has continued to support American flat track racers,” Weston added. “We are extremely pleased to see the resurgence of American Flat Track popularity and the work AFT has done over the past few years bringing the sport back into the limelight. It is especially gratifying to be in a position to increase our support and become a series partner. We are excited to be a part of this incredibly competitive and exciting form of American racing.”

As Grand Marshal of AFT’s season-opening event at DAYTONA, ‘Fast’ Freddie Spencer will tour the paddock, sign autographs along with the AFT racing stars, and might even don Arai’s all-new 40th Anniversary Spencer-replica helmet for a slow lap for the crowd. Given his many glorious victories at Daytona, that would be especially fitting.

American Flat Track will kick off its highly-anticipated 2018 season with the Bigger, Better, and Faster Harley-Davidson TT presented by Russ Brown Motorcycle Attorneys at DAYTONA under the lights inside the fabled trioval at Daytona International Speedway on Thursday, March 15, 2018. Tickets start at just $30 and are available for purchase now at www.daytonainternationalspeedway.com or by calling 1-800-PITSHOP.

Hirotake Arai created the first helmet in Japan for his own protection, not just for business. To this day, the Arai company is still owned and operated by the Arai family, driven by the same motivation of superior rider protection that drove Hirotake. Comfort, ventilation, aerodynamics, low weight and low noise are just a few of the benefits most riders look for in a helmet, and of course Arai strives to deliver those things. However, Arai has never forgotten the most import function of a helmet – protection – which is why Arai focuses on The Consistent Pursuit of Gains in Protection. See more at www.araiamericas.com.

Editorial Note: Use the scroll and zoom tools in...
Read more
World Endurance