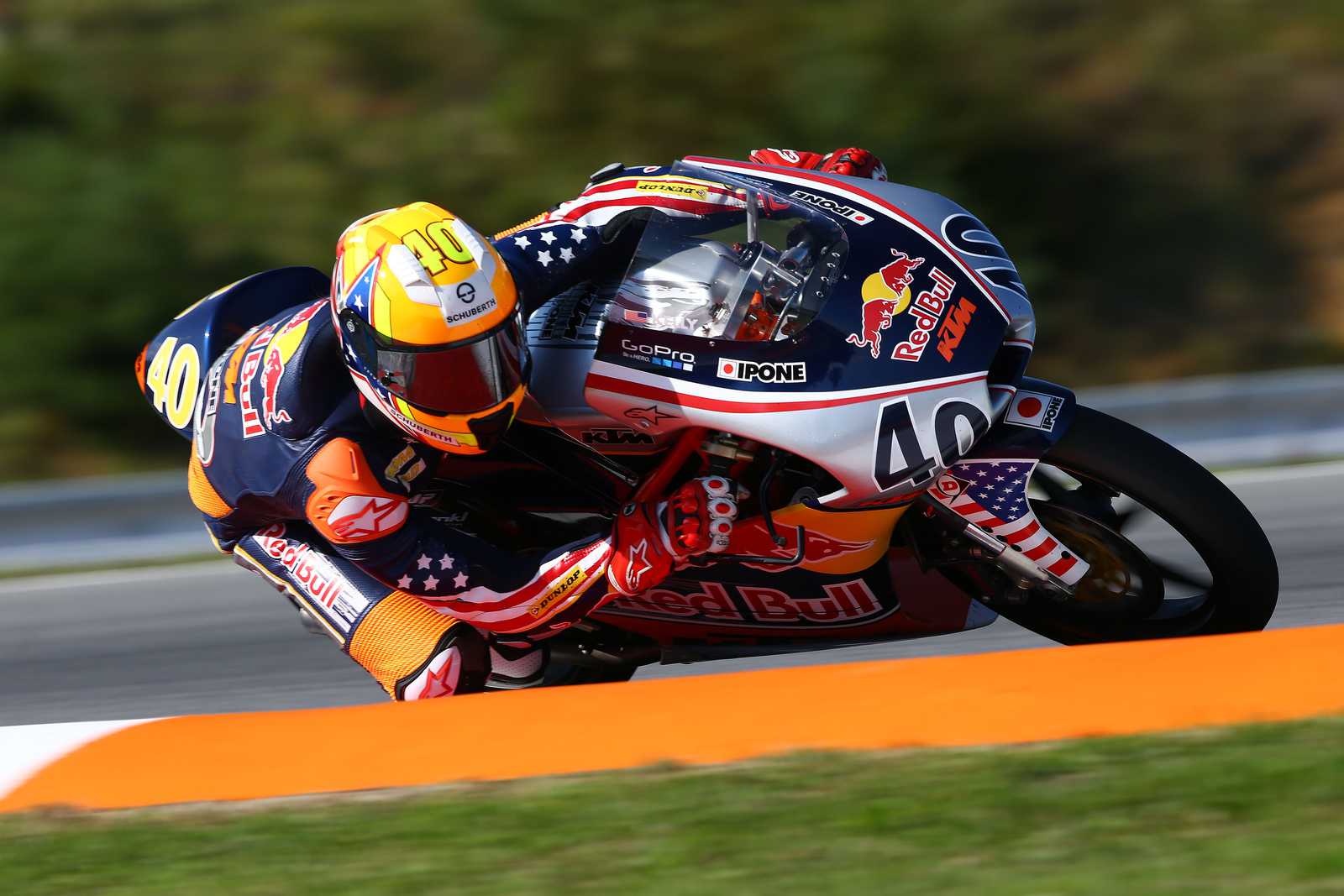 American Sean Kelly has been invited to continue in the Red Bull MotoGP Rookies Cup during the 2017 season.

“Officially, they told me on Sunday morning [September 25 at Motorland Aragon], right before the final race of the season,” Kelly told Roadracingworld.com in a telephone interview from his race-season home in Spain. “It was a hard feeling to not know on Friday and Saturday, but it was really good to hear the news on Sunday. I’m not sure, but I think there’s only approximately 12 riders staying in the series, so I feel very fortunate.”

Kelly also feels very fortunate to be invited back because he didn’t have the strongest results in 2016. He finished 22nd out of 24 riders in the Championship and only scored points in three out of 13 races, but the 14-year-old from Florida said series organizes told him they recognized all the challenges he faced in 2016 as well as the way he carried himself off the track.

“They told me they understood that I came from very little experience compared to a lot of the other riders in the series and that I had a lot to learn this year,” said Kelly. “In the beginning of the year I had some crashes that they let me know they didn’t appreciate, and neither did I, but after a couple of rounds I was able to get out of that bad place. They also said they understood that it was hard to get out of that hole I dug myself into at the start, and they liked the progress that I made after that point in the year.”

Kelly went from finishing at the back of the field, if he finished at all, at the start of the year to challenging for top-10 positions and lapping within one second of the leaders at the end of the year. And that’s all while still learning each new racetrack.

“Everything over here is completely different,” said Kelly. “There’s not really one thing that’s the same as what I experienced in the United States or Mexico [where Kelly won the 2015 KTM RC Cup Championship, in addition to winning a race at the RC Cup World Final at Silverstone]. It’s just incredible being at these huge, amazing tracks, and then there’s how professional you have to be around the Red Bull Rookies team and in the MotoGP paddock, because there’s a lot of pressure once you’re there.

“After some races I was able to calm down and start enjoying it, because it’s difficult to 100% enjoy it because of the pressure and everything being so new.”

Part of all the new things around him was the fact that Kelly and his family moved from Florida to Spain for the race season. While Red Bull provides everything riders need once they arrive at the events, the riders are responsible for getting themselves to the events. For an American, that could require six transatlantic trips for a minor and their parent/guardian in 2016, and that’s not counting pre-season testing.

Kelly’s family decided the best way for them to afford the season was to relocate to Spain, near Barcelona.

“It’s the only way we could do the whole season, because financially it would have killed us to come from the U.S. to Europe every month,” said Kelly. “We wouldn’t have lasted two races with how much it costs to travel back and forth. This also works better for training. There are so many more tracks, and I have so many more people helping me. The move was definitely the right thing to do.”

In addition to doing a Florida-based home schooling program, Kelly said he also worked with a coach to strengthen his mental approach to racing and regain his confidence, which was a key to turning around his season. And Kelly says he’s going to continue down his current path as he prepares for the 2017 Red Bull MotoGP Rookies Cup.

“Now it’s just a lot of training and getting the mentality right so I can try to take a step forward next year,” said Kelly.