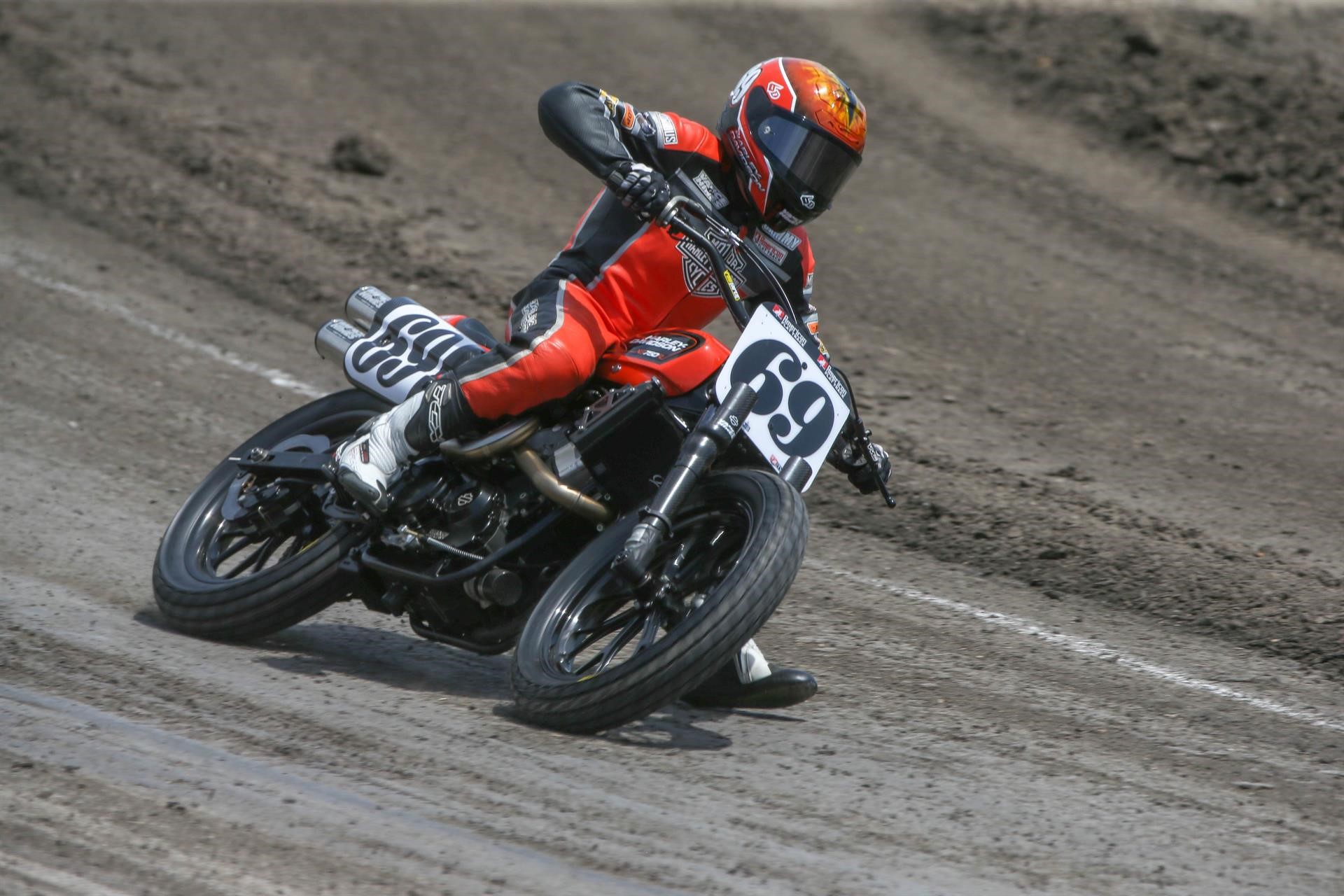 What does this tell us about [Tuesday’s] Harley-Davidson Black Hills Half-Mile? Namely, that anything can happen – and likely will.

Last year, Black Hills Half-Mile winners Jared Mees and Brandon Price (No. 92 Parkinson Brothers Racing/DPC Racing Honda CRF450R) did exactly what they needed to do: Mees solidified his lead in the AFT Twins championship with just five races to go, and Price launched himself into championship contention in the AFT Singles division, moving to within 16 points of then-class leader Shayna Texter (No. 52 Husqvarna Motorcycles/JCS Racing FC 450).

This year, a win for Mees would solidify his stranglehold on the class, which he leads by 85 points over Henry Wiles (No. 17 Bandit Industries/Wilco Racing/Willy Built Kawasaki Ninja 650). Still, there’s competition for Mees. Jake Johnson proved that [Sunday] night with his impressive win at the Buffalo Chip TT.

Then there were the impressive Chip performances of Sammy Halbert and Jarod Vanderkooi (No. 20 Harley-Davidson Factory Flat Track Team XG750R), who went one-two in their Semi and ran up front in the Main, with Halbert grabbing third (right behind Mees) and Vanderkooi leading the field early on until he was taken out from behind in a crash involving Briar Bauman (No. 14 Zanotti Racing Kawasaki Ninja 650). Bryan Smith (No. 4 Indian Motorcycle Racing backed by Allstate Scout FTR750), who nabbed second at Black Hills last year, returns to action tomorrow after taking the Chip off to help his broken leg heal more fully.

With nine winners in 12 races thus far, the AFT Singles race is anyone’s to win. A win by Price would mark the 18-year-old’s injury comeback in hugely dramatic fashion after returning to AFT Singles competition at the Chip last night after a two-plus-month layoff after his crash in May. That leaves the top three AFT Singles heavies: Points-leader Dan Bromley (No. 62 KTM North America/Bromley Motorsports 450 SX-F), Ryan Wells (No. 94 RMR/Al Lamb’s Dallas Honda CRF450R) and current third seed Shayna Texter. This one’s bound to be a knock-down drag-out fight, and it’s one fans won’t want to miss.

Harley Hooligan racing figures into the evening’s festivities, too. The Black Hills event, which will take place on a short circuit using part of the front straight, is the third and final round of the Hooligan Triple Crown – Harley-Davidson’s three-race Hooligan series. Hooligan racing is the latest addition to the motorcycle racing scene, pitting hometown heroes from across the nation against one another on home-brewed race bikes in an all-out battle for glory.

There’s plenty going on during race day, too, including motorcycle stuntman Clint Ewing, Grand Marshal (and radio/TV/rock ’n roll personality) Riki Rachtman, a fan-favorite Strider Cup race featuring the tiny-tot/3-to-4-year olds, and a family-friendly Fan Zone with a host of vendors, food and cool stuff to do.

General admission tickets can be had for just $35 online today at Black Hills Tix. (Tickets are $10 more on race day.) Turn-4 VIP tickets offer an up-close-and-personal view of the racing for $125, and include a light dinner with lemonade, ice tea and water, plus complimentary beer and wine between 5:30 pm and 8:30 pm.

For those that want to enjoy the race without worrying about riding to and from the track, tickets for a new shuttle bus service between Sturgis and Black Hills Speedway are now on sale. The Glencoe Camp Resort Party Bus Ticket is a $35 add-on giving fans access to a round-trip party experience aboard air-conditioned buses running between the Glencoe Camp Resort in Sturgis and Black Hills Speedway in Rapid City (beer and other refreshments are included). Fans don’t have to be registered campers at Glencoe to join in on this fun and safe option; all fans are invited to buy a ticket and take the ride. Reserve your spot on the round-trip party bus at https://www.showclix.com/event/black-hills-half-m…

For a thoroughly in-depth experience with flag-to-flag coverage of both Main Events enhanced by drone and onboard footage, be sure to catch the NBC Sports feature telecast of the Harley-Davidson Black Hills Half-Mile presented by Law Tigers Motorcycle Lawyers when it premieres on NBCSN on Saturday, August 18 at 5:00 pm ET (2:00 pm PT). Be sure to check your local listings, or for the complete broadcast schedule for AFT on NBCSN, please visit http://www.americanflattrack.com/events-nbcsn