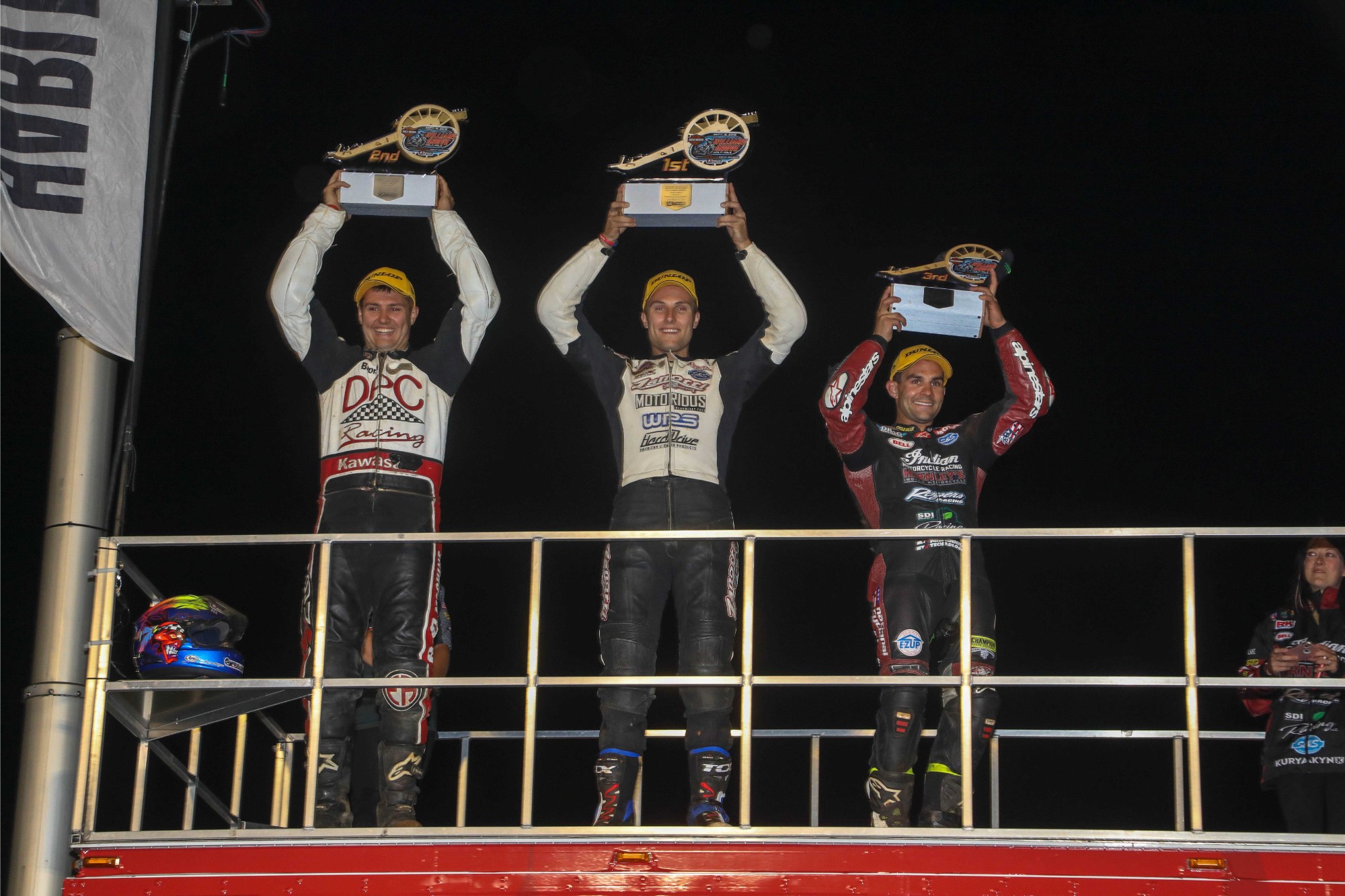 Kolby Carlile: Step In The Right Direction At Williams Grove

WILLIAMS GROVE, Pa. – Although not the win he was hoping for, Kolby Carlile made some positive steps in the right direction at the Williams Grove Half-Mile after a tough second half of the American Flat Track AFT Singles season.

In an abbreviated program intended to get the 16th round of the championship in before the weather reared its ugly head, Carlile was the man to beat all day on his Estenson Racing Yamaha YZ450F. He not only topped practice and qualifying, but went on to take a convincing win in his Semi. Unfortunately, he was unable to repeat that in the Main and had to settle for a fifth-place finish.

At the end of the day though, being able to find his comfort zone on his bike again was a big boost for Carlile. With his regained confidence, the “Flying Tomato” is looking forward to the final two rounds of the season and is hoping to add another pair of “W’s” to his two Mile wins earlier this season.

“We almost had another perfect day. We were fastest in all of practice and qualifying, and I won my Semi with a little gap back to second. Sadly, we just came up a bit short in the Main. We got a bad start and the track changed a lot between the Singles Semi 1 and the Main. I searched throughout the whole Main event, but was never able to find the line that I needed to pass and work my way up. It’s unfortunate, but absolutely a step in the right direction for me. Felt amazing riding the bike all day, and I am looking forward to these last two Mile races of the year.”

Jake Johnson Rallies Back To Finish Fourth At Home

WILLIAMS GROVE, Pa. – Estenson Racing’s Jake Johnson fought his way back after a bad restart at the Williams Grove Half-Mile to score some valuable points at his home race in the “Keystone State.”

Due to inclement weather, it was a bit of chaos with the hurry-up schedule at round 16 of the American Flat Track series, but Johnson was in his element. He qualified fourth, took second in his Semi, had a good start in the Main and was hoping for a better one after the red flag. Unfortunately take two didn’t go any better. He was a little too eager and ended up getting shuffled backwards. The two-time Grand National Champion gathered himself and worked his way back from seventh to finish fourth.

“We were in the hunt all day really. I qualified fourth, which is probably one of my best qualifying spots at a non-TT this year. That was kind of the first time all year on an oval track that we were in the hunt all day. So that was encouraging. We had a shot at the podium I think early on, but I feel like fourth is kind of the speed we had yesterday in the Main event. I’m happy I was able to recover a little bit from that bad restart.

“Hopefully, we’ll keep that momentum going the last few rounds. I’m not too concerned about the points, really; it an ‘if you ain’t first, you’re last’ kind of deal. But, we actually have a realistic shot at the top five. I’m up to sixth right now, so it would be nice to finish the season off strong and at least end up in the top-five.”

Strong Run at Home for ST52 Racing with Shayna Texter

It was a form of redemption for the rider of the No. 52 ST52 Racing Roof Systems/Parts Unlimited Husqvarna FC450 from nearby Willow Street, Pa., who missed the feature race in 2017 after cutting a tire during the preliminaries.

Saturday, she was was competitive throughout the program with the new team she formed over the off-season, taking Husqvarna to first full season of flat track motorcycle competition. Texter was second in opening practice and then third in qualifying. Starting her semi on the front row, she battled eventual winner Tanner Dean all the way, finishing second, only 0.179 seconds behind at the checkered flag.

Advancing to the 15-lap main event, Texter then chased Dean all the way to finish on the second step of the podium.

“I really wanted to get this win – I thought it would be super special to win in front of my home town – the PA Possie – but second place is a heck of a lot better than last year,” Texter said. “I’m super happy – this gives us something to build on for the future.”

It was Texter’s third runner-up finish this season among seven podium finishes, which includes a pair of victories. Career-wise, she has 15 main event triumphs – the only woman to win in Grand National Championship competition.

“Tonight I needed Tanner to make a mistake,” Texter said. “I pushed really hard the first five laps and had a big moment down in three and four. We’re battling for third in the points right now, so I decided to calm it down a little bit and bring it home in second place.”

Texter looks to continue her momentum into the final two races of the season – both on one-mile tracks new to the AFT schedule. The next event will be in Minneapolis on Sept. 29, followed by the season finale at the New Jersey Meadowlands on Oct. 6.

All of the AFT on-track activity at www.fanschoice.tv.

In a main event that featured bar-to-bar action and multiple lead changes, it was Indian privateer Briar Bauman who spent most of the race locked in a battle with Mees, before ultimately pulling away. Briar’s brother, Bronson, also managed to push his way up to the back tire of Mees and ultimately made a pass with few laps remaining. It was his first career AFT Twins podium.

“The Bauman brothers ran a great race and put on a really good show. Both Briar and Bronson pushed hard to get their 1-2 finish,” said Gary Gray, Vice President – Racing, Technology & Service for Indian Motorcycle. “It was exciting watching Briar battle Jared to get his first win of 2018. Plus, Bronson riding Brad’s FTR750 and getting his first ever twins podium made for a really amazing day at Mechanicsburg.”

The season continues on September 29 in Indian Motorcycle’s backyard at the Minnesota Mile at Canterbury Park. For more information on Indian Motorcycle Racing, backed by Allstate Insurance, the Indian Wrecking Crew and Scout FTR750, visit IndianMotorcycle.com and follow along on Facebook, Twitter & Instagram. For information on purchasing a Scout FTR750, please contact [email protected].