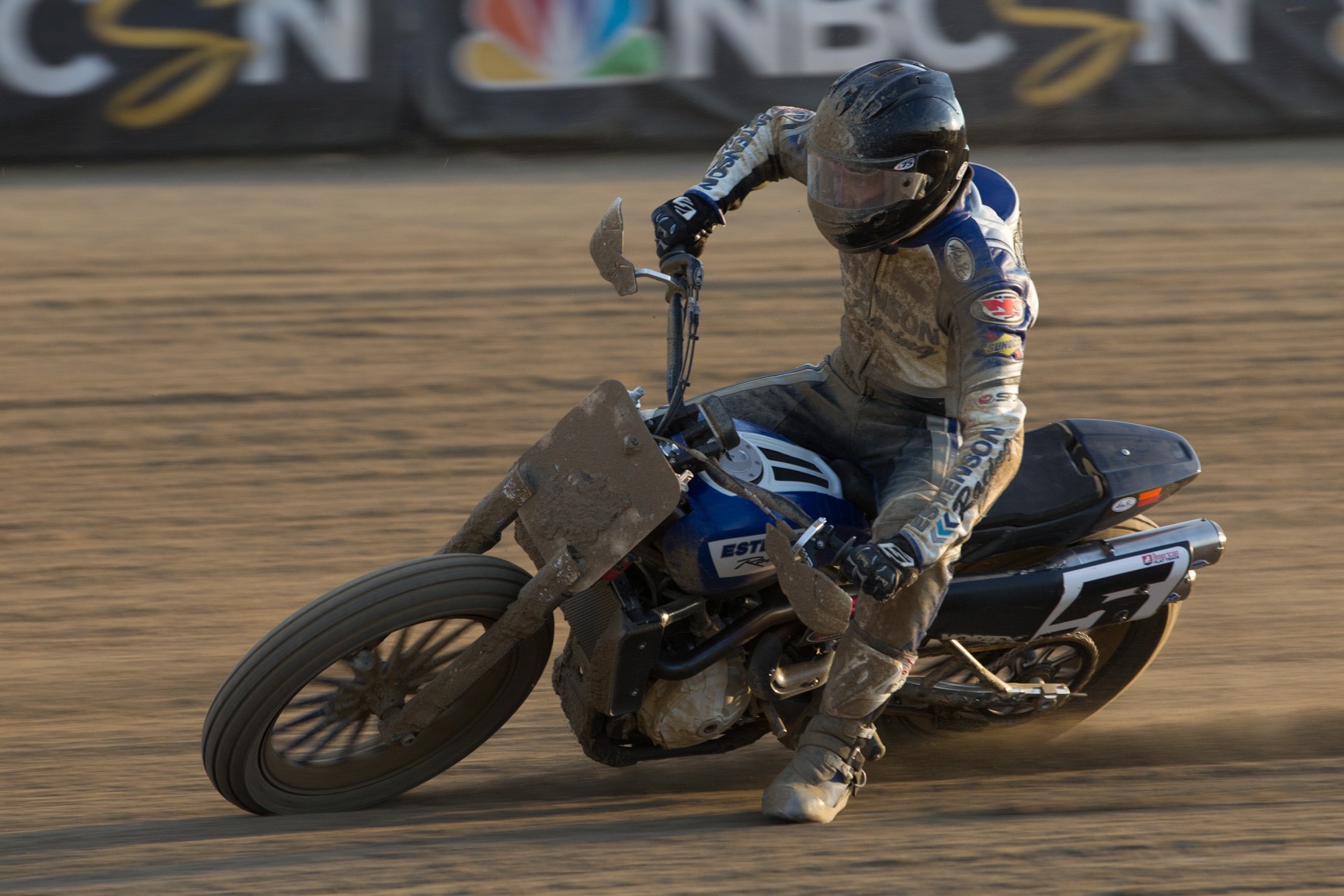 Jake Johnson Toughs It Out To Leave Lima With Points

PHOENIX (July 2, 2018) – Jake Johnson really isn’t a “cushion” track rider, but he headed to the Lima Half-Mile looking forward to letting it all hang out on his new Estenson Racing Indian Scout FTR750. Unfortunately for Johnson, he went into one of the most physical races of the season at a disadvantage – recovering from a training injury to his right leg that had him not quite a hundred percent.

In spite of the setback, Johnson pushed forward and worked his way through another tough start of the day to keep moving forward and continue to make improvements throughout the day. He overcame a dismal qualifying session, a seventh-place finish in the Heat and got a good jump on the restart of the Semi to get out of the pea-gravel spray and ride his own race to finish fifth. Johnson felt even better in the Main, but unfortunately burned his brakes up early and went on to keep it on two wheels to finish 12th. Although still not the results the former two-time Grand National Champion has been searching for, he felt he made progress on his new machine and looks forward to the New York Short Track which is more his style.

“Going into the Main, I knew it was going to be tough, but I got a really good start from the second row. I was actually feeling pretty good; was feeling pretty racy actually, but my physical condition wasn’t the greatest today. I was charging hard at the beginning and once I lost the brakes I kind of just tried to pace myself and make sure I finished.

“It was a pretty rough week, but we came out of here with something. I think we learned a little more about the bike too, which is good. I’m really looking forward to next week. Hopefully get some good rest this week and feel 100%. I think New York is going to be my kind of track.”

LIMA, Ohio – Kolby Carlile was hoping to turn last year’s misfortune at the Lima Half-Mile around in 2018, but unfortunately another mechanical ended the night short for the defending American Flat Track AFT Singles Champion.

The Estenson Racing rider’s day started out well. He qualified third, finished second in his Heat and third in his Semi. Carlile went into the Main event confident that he could bring home a podium finish on his Yamaha YZ450F. Unfortunately, that was not in the cards as he had to retire from the race early with a mechanical while racing in a solid third-place position. Although the frustration mounts for the champ, Carlile has put his focus on next weekend’s race at the New York Short Track, where the New Yorker hopes to take the win in front of his home crowd.

“I don’t know what to say… Lima doesn’t like me. I work way too hard for this sort of stuff to keep happening. My fitness is really good. I was running third and I was pretty confident I was going to be able to finish there. I’m going to be honest; I’m not happy. It took a big chunk of points away tonight. Not much to say. We’ll figure it out in New York.”

Texter Makes History for Husqvarna with Dominant Victory at Lima

It was the 14th AFT Singles triumph for the Pennsylvania native, but first for her new team – ST52 Racing – which debuted in 2018 competition.

It came on the heels of back-to-back third place finishes on mile tracks, after scoring a pair of second-place showings on half-miles early in the season.

Texter ran the table on the rough, pea gravel track usually used for horse racing. Fastest in opening practice, she also led qualifying and won both her heat race and semi aboard the No. 52 Husqvarna FC 450.

“It definitely gave me more of a boost going into the main event,” said Texter of her strong performances heading into the main. “It’s awesome to give Husqvarna its first win in Flat Track – it’s a dream come true. Hats off to my entire team, Husqvarna and all my sponsors – Roof Systems, Parts Unlimited, Drag Specialties, everyone behind me. It’s been a long year, and I’m so happy to get this one and give my sister the victory lap.”

So strong was Texter’s run that the main event victory was almost anticlimactic.

After getting a strong start, Texter quickly broke from the pack to run out front and score a win by 4.765-seconds.

In her heat race, she dove to the inside to take the lead. Then in the semi, she faced repeated challenges on the inside – including on the final lap – but was able to come back each time to win by 0.377-seconds.

“We had an awesome bike and I’m so happy to get this win with Husqvarna,” she said. “The bike was awesome and we didn’t have to make any adjustments. I wanted to make some changes for the main event, but my mechanics Justin and Barry both said no, we haven’t changed a thing all day. That’s how some of these days go. When you’re on, you’re on, and it’s awesome.”

The victory moved Texter to third in the AFT Singles standings, trailing second by one point with eight races remaining.

“It’s incredible to win at Lima – I never in a million years thought I would win this race,” Texter said. “I think spending all year listening to my boyfriend Briar (Bauman) about Lima every single day since he won last year kind of rubbed off on me a little bit. I did what he did last year – just hold it wide open and try for the best. A big thank you to FMF and Roof Systems for what they do for this ST52 Racing program.”

Texter will have no time to rest on her victory. The AFT competitors return to action on Saturday, July 7, for the Harley-Davidson New York Short Track at Weedsport Speedway in Weedsport, N.Y. Opening ceremonies begin at 6:45 p.m., with the AFT Singles main event at 9:29 p.m. All on-track activity will be streamed live on www.FansChoice.TV.

Mees was seeking redemption on Saturday night at the Lima Half-Mile as this was the only race he did not finish on the podium in the 2017 season. Determined, Mees edged out the competition early in the race and held the lead throughout the Main. Carver bolted to the second position and managed to close the gap between him and Mees in the second half of the race, but Mees was able to maintain his lead and further his lead in the 2018 points standings.

“I’ve had my sights on winning Lima ever since last year. This is a tough track and getting this win is especially meaningful for me,” said Mees. “I have to thank my team who does an incredible job at keeping my Indian Scout FTR750 in top form.”

“The Lima Half-Mile is one of the most challenging races of the year, and we’re thrilled to see another Scout FTR750 podium sweep,” said Gary Gray, Vice President – Racing, Technology & Service for Indian Motorcycle. “This was a momentous win for Mees in what has been an exceptional season for him and Indian Motorcycle Racing.”