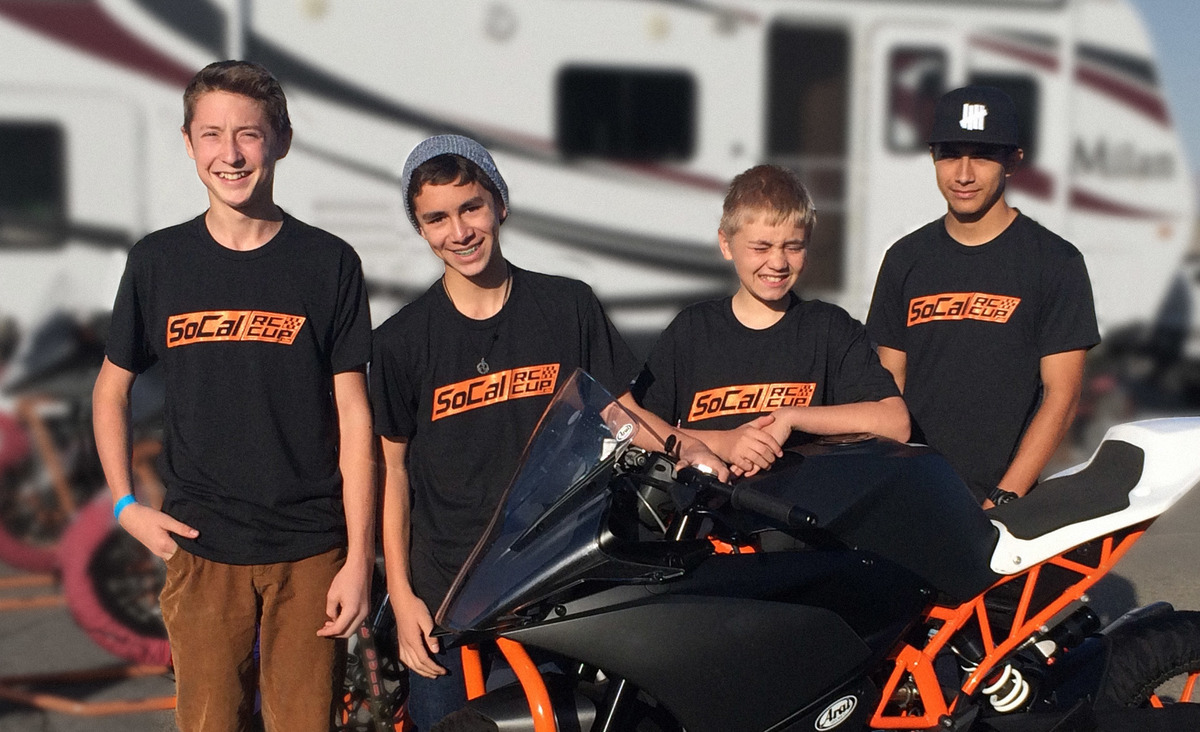 Southern California to represent in the MotoAmerica KTM RC Cup

Four young racers who compete, predominantly, in Southern California will be joining the MotoAmerica KTM RC Cup series. Ruben Casarez, Gray Pham, Nic Swensgard and Ashton Wright spent the past weekend testing their new KTM RC 390 Cup bikes at Chuckwalla Valley Raceway. Ashton, Nic and Ruben plan to race the entire season which starts in a few weeks at Road America. Gray will be joining the fray at Barber or Miller and then run the remainder of the season.

Ashton Wright’s father, Bryan is excited about a spec class, “All of the boys were on different bikes before this: Ashton was on a Moriwaki MD250; Nic on a RS125; Ruben on a Ninja 250; and Gray on an RS85. The move to a single spec bike creates more learning opportunities for the boys when they ride and race together, locally. And, when we go to the MotoAmerica races, it will be a level playing field.”

“Nic is beyond excited to race the KTM,” said Scott Swensgard “I was hoping to stay on a GP race chassis but listening to professionals I trust and seeing my son’s desire to race with his friends and the other fast kids in the U.S., we are jumping in. Instead of racing on grids of two or three RS125s, or Moriwaki 250`s he could be fighting with 20 or more in the safest and most professional environment possible in the U.S. with MotoAmerica. I was a bit apprehensive when we first rode the KTM due to its size and weight but after the first day of practice I saw that Nic was comfortable, enjoying himself, and getting up to speed quickly.”

Ruben is enjoying the KTM: “I love the bike! It’s faster than my Ninja and it handles better. And it looks great!”

“I know there are going to be some big grids and great competition. We will have to learn the tracks quickly and do our best. I am so thrilled to race in a big grid and fight for every position,” commented Ashton when asked what he thought of the series.

Nic Swensgard lived on the east coast for the first three years of his racing career: “I can’t wait to see a lot of the kids I raced against when we lived in Atlanta. I’m glad we have a legitimate national series for younger racers now and I’m glad I will be able to grid up for the very first race of the MotoAmerica KTM RC Cup.”

Gray has the biggest step to take, “I am moving from an RS85 to the RC 390. With the KTM being my first 4-Stroke, the big step was a little scary at first. I got used to the size and weight of the bike and within two sessions I felt really comfortable. Since then we have done some suspension tweaks and the bike just keeps getting better and better.”

Pete Pham added: “As a dad of a young racer, I have been searching for ‘what is the next step?’ This series could not have come at a better time for us. It’s great to see the commitment of MotoAmerica to the upcoming road racing youth – a big shift from the past four or five years. I believe we will see American youth road racing history rewritten with the launch of the KTM RC Cup series”

“I can’t wait to see 20+ fast kids on similar bikes headed into turn one. This class is going to be a mix of competition and carnage… and, probably, some of the best racing of the weekend,” said Ruben’s grandfather, Stephen Ludwig.