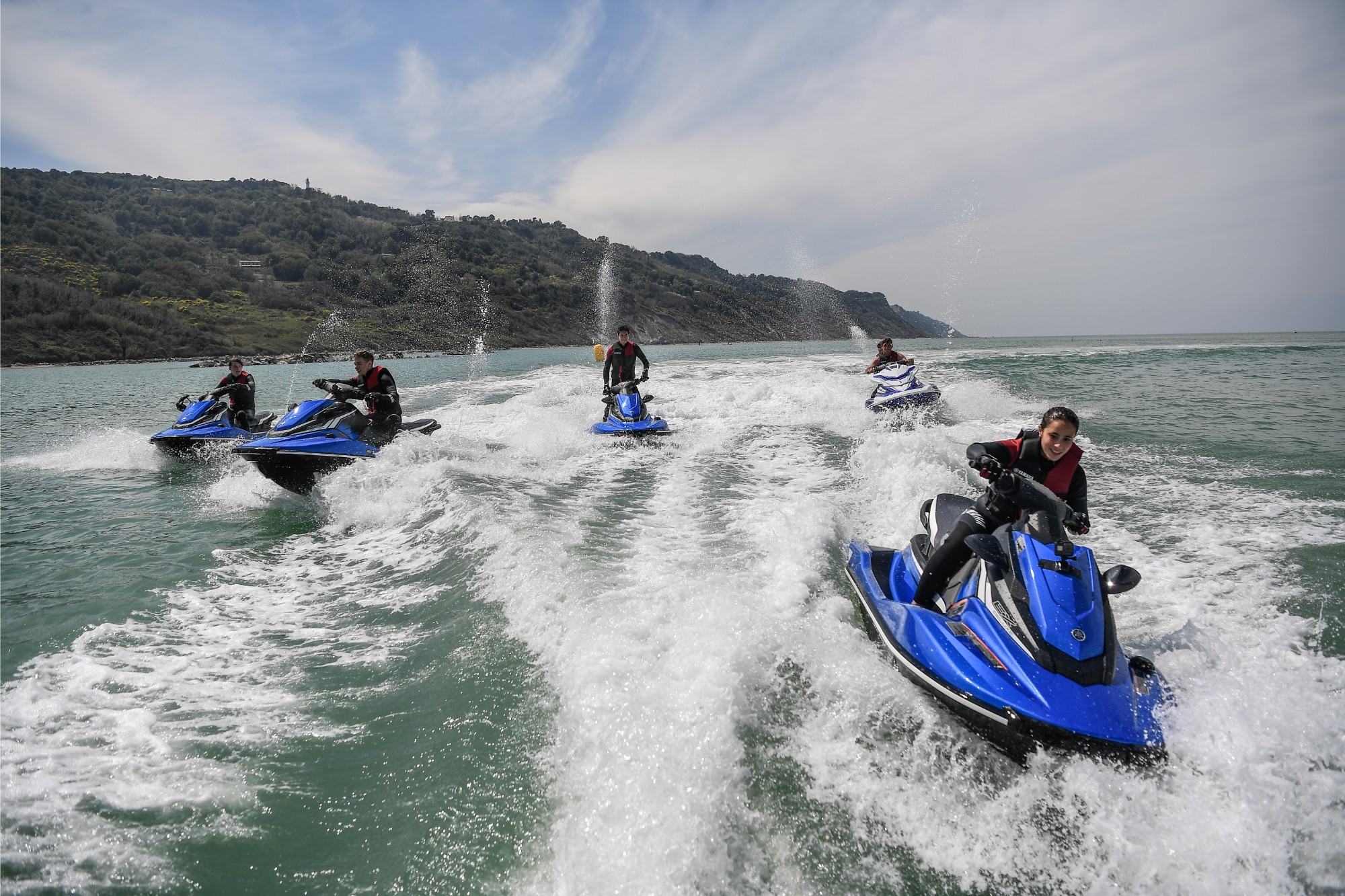 The Yamaha VR46 Master Camp students got special VIP treatment yesterday in Tavullia. Not only were they allowed to ride Yamaha EX Deluxe WaveRunners at a beach they had all to themselves, they were also invited to the VR46 Motor Ranch to sit in on a private VR46 Riders Academy training and meet their hero, Valentino Rossi. 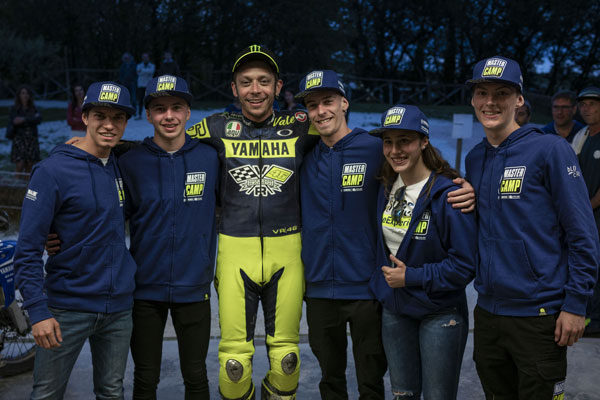 After the Netherlands‘ Finn de Bruin (18), Italy‘s Kevin Sabatucci (20) and Jacopo Facco (19), France‘s Andy Verdoïa (16), and Spain‘s Beatriz Neila (17) put in the hard work on their first three Yamaha VR46 Master Camp days, they were rewarded with a fourth day full of surprises.

The day started off as normal, with the riders making an early start to complete a running session at the Fisio Gym. The intensity level was upped a couple of steps this time by their trainer Carlo Casabianca and Moto2-rider Luca Marini. In the clear sunshine the riders were then asked to hop into the van to attend a special activity the Yamaha VR46 Master Camp had organised for them in collaboration with Yamaha Marine Europe and Yamaha Marine Italy. The local authorities and port authorities gave the Master Camp special permission to run this event.

Naturally, when the riders saw the Yamaha GP1800 and EX Deluxe WaveRunners that they would be riding, they couldn‘t contain their excitement. They quickly changed into their special Yamaha wetsuits, to start the training.

The instructor of the day, Alessandro Marcianò, is a legendary Italian surfer, who is not only acknowledged worldwide for his surfing records, but also incredibly skilled in steering WaveRunners. This is thanks to the surfing ’buddy system‘, where, when one surfer is out in the water, a second one follows him on a WaveRunner.

Marcianò had the students up and running in no time, in perfect control of their WaveRunners, and it drew quite the star-studded crowd. Not only did the port authorities come to say hello to the riders, but also MotoGP rider Franco Morbidelli and Moto2-rider Lorenzo Baldassarri came to watch the young protégés in action.

“Being here with Yamaha Marine and the Yamaha VR46 Master Camp is a first for all of us.”, said Marcianò after his final run. “I’m honoured to be a part of this and that I get to train these talented riders from all over Europe.

“We were lucky that, contrary to today‘s weather forecast, it was sunny. This means we were able to run the event without problem, which is really nice because it was some of these guys‘ first time on a WaveRunner.

“For this session I focused on learning them, first of all, how to ride and turn before moving on to some more intricate tricks and some faster exercises, but these guys already have good riding skills, so having fun was the main thing today. They are super fast and competitive!”

The students were having the time of their lives on the Pesaro beach, but little did they know the Master Camp crew had another surprise in store for them – a big one. The riders were driven to the VR46 Motor Ranch in the evening for a special main event. They were invited by VR46 to a private training session, to watch Valentino Rossi and their VR46 Academy friends in action.

After a quick photo opportunity, the Master Camp riders couldn‘t believe their luck that they were sitting front row to watch their childhood hero live in action. After taking a close look at his superb flat track riding style, they were fully immersed in watching the Americana race (they rode one themselves on Day 3), which ultimately was won by Rossi after a hard-fought finale against Morbidelli.

“I‘ve been following the Master Camp and their training, and on Day 4 we finally had the chance to meet.”, said Rossi at the end of the day. “They visited the Ranch to say hello and watch the training session with the VR46 Academy riders, who they‘ve met before. I heard from the guys and the other coaches that the Master Camp riders‘ level is already high, but maybe they still found some points where they think they can improve on flat track by paying close attention to our riding style. The Americana race was a fun way to end the evening. I hope that the Master Camp guys and girl enjoyed the show!”

“It was my first time riding a WaveRunner. I had a lot of fun, so I hope to have the chance to have another experience like this. I want to say thanks to Yamaha and Alessandro for the amazing afternoon. But in the evening something really special happened, we were invited to the Ranch to meet Valentino and watch him and the VR46 Academy riders train together. It actually made me a bit emotional, because it was my dream to meet Valentino, and it was so impressive to watch him ride on the flat track. It inspired me.”

“I want to thank Yamaha Marine for this experience with the WaveRunner. I enjoyed it a lot. The coach was super, he taught us a lot and made it really fun! It was also really nice to meet Franco and Lorenzo Baldassarri at the beach when they came to watch us. In the evening we met up with even more VR46 riders and met Valentino at the Motor Ranch. To watch them put into practice what we‘ve been learning from Marco Belli was really nice to see. I‘m really happy! These experiences are so nice, and I can‘t wait to continue the programme, though we only have one day left.”

“I‘m really happy that we got to do the Yamaha Marine event. I had a lot of fun! At the start the water was a bit cold, but as soon as I started riding the WaveRunner I forgot all about that. I want to thank Yamaha Marine and Alessandro for making this activity possible. In the evening we were given the chance to meet Valentino and watch him and the VR46 Academy riders train and race together at the Motor Ranch, and that is something I will remember forever.”

“On Day 4 we tried something new, a new adventure for both us and the Master Camp itself! It was fantastic to ride the Yamaha WaveRunners on the beach. It was such a great experience because not only did we have fun and relax, but we also learned a lot. I want to thank Yamaha Marine for making this possible and Alessandro for teaching us the ropes. It was a lot of fun, and it continued in the evening when we watched Valentino and the VR46 Academy riders do an Americana race. I will remember the battle between Valentino and Morbidelli for the win for a long time.”

“On Day 4 we had a lot of fun on the Yamaha WaveRunners. It was a first for me, but we had a good coach in Alessandro Marcianò, who was able to teach us a lot of things. It was actually not that difficult to start off, you just have to get used to steering by using the throttle, which is something we‘re not used to in road racing: we usually brake and steer into the corner. Once you get used to this and the bumping of the waves, you can have a lot of fun! Meeting Valentino was also a special opportunity. Watching him train is really impressive.”