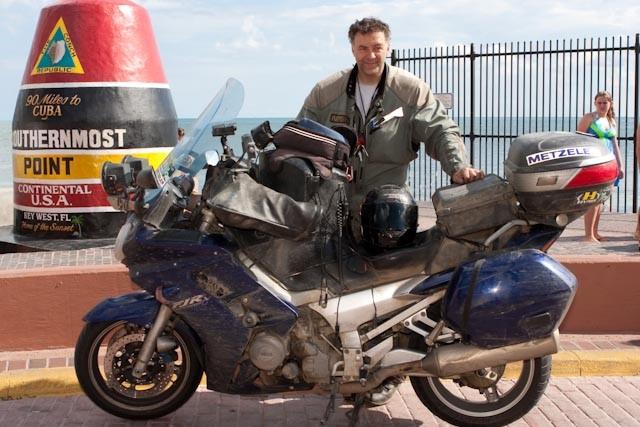 Rome, Georgia: On minute Zero, John Ryan was in Prudhoe Bay, on the North Shore of Alaska. 5,191 minutes later, Ryan was in Key West, Florida, having traversed the entire North American Continent, the long way, on his 2005 Yamaha FJR 1300, outfitted with Metzler Z6 Interact sport-touring tires. And with those 5,191 minutes, or, if you prefer, 86 hours and 31 minutes, Ryan totally destroyed the existing time record for this trip, of 96:01, by a clean 9.5 hours! The adventure began before the adventure began when Ryan ran into a blizzard on the Dalton Highway north of Fairbanks, while trying to get to the starting point for his continental crossing. The snow forced him to return to Fairbanks and try again a few days later. Then, when he was finally able to reach Prudhoe Bay and began his trip, Ryan cut a tire on the sharp rocks of the 400-mile long gravel Dalton Highway, repaired it, and continued to Fairbanks for a replacement. Beginning all over again on try number two, (or is this try number three?) a rock punctured Ryan’s oil pan 26 miles from where he was to start his journey, forcing him to stop in Prudhoe Bay for repairs. Local mechanics, used to working on heavy machinery, welded his cases, fabricated a case guard, and Ryan returned to the start, ready to set the clock and begin his adventure without further interruption. Nailing the holeshot, so to speak, Ryan blitzed to Fairbanks, riding through 300 miles of rain and mud on the first 400 miles. There, Ryan showered himself and his Yamaha in a carwash, fueled his bike, and headed south to Florida, now mostly on paved roads. Covering the 5,645 miles, from the far northwest to the far southeast of the North American Continent, Ryan basically ran as perfect a journey as one could ever hope for or plan. There was more rain from Edmonton, BC, until Madison, WI, “” a distance of over 1,200 miles “” and Ryan made the slight error of a wrong turn in Tennessee that added about 120 miles to his trip. But with so much that can slow a journey like this, one wonders if a more perfect trip is actually possible. Ryan said, “I could have done better and figure I gave up about three hours. They had me at the border crossing from Canada for an hour and a half. And then I added distance to the trip in Tennessee. The bike and tires were more than great. Not only did they go the distance, but with my enlarged fuel tank and extra gear everything is really stressed to the limit. I had over 140,000 miles on my FJR 1300 when I started, and it’s still under warranty. Over 100 people helped me on this trip, and I’m indebted to them all and Metzeler and Yamaha.” Ryan’s record took exactly 9 hours and 30 minutes off the previous record, and it was also significantly quicker than John Ryan’s last attempt, which came up short at a total time of 101 hours and 11 minutes, due to extremely bad conditions and less than perfect luck. Ryan said, “Other long distance riders have told me that they think this new record will stand for a long, long time.” Yes, 86 hours and 31 minutes, less than four days, is a seemingly impossible period of time to ride a motorcycle from the top of Alaska to the bottom of Florida. Heck, it used to take airplanes that long to get from Prudhoe Bay to Key West. But they didn’t have the advantage of the high- mileage, high-confidence, new Metzeler Z6 Interact sport-touring tires. Keeping records for his record required Ryan to maintain time/date stamped receipts from all gas stops, and to have the beginning and end of the journey witnessed by police too verified his identity. Plus, Ryan used an online tracking system that recorded his whereabouts approximately every 20 minutes along the route. It will be an official record once verified by Michael Kneebone of the Iron Butt Association. Metzeler congratulates John Ryan for joining its historic list of Metzeler heroes, and we congratulate all who helped Ryan in this complicated conspiracy of Ultimate Continent Crossing. And, yeah, don’t try this at home. On the road since 1892, Metzeler has over 100 years of experience meeting motorcycle riders’ toughest demands with unflagging innovation, setting the trends that others follow. Whether one is drawn to the longevity of its classic design or its uncompromising performance, Metzeler is chosen by more riders and builders than any other motorcycle tire on the road, making it an icon for motorcyclists worldwide. The brand’s North American office for sales and distribution is located in Rome, GA, while production takes place in Germany and South America. For more information about the entire line of Metzeler products, please visit www.us.metzelermoto.com.