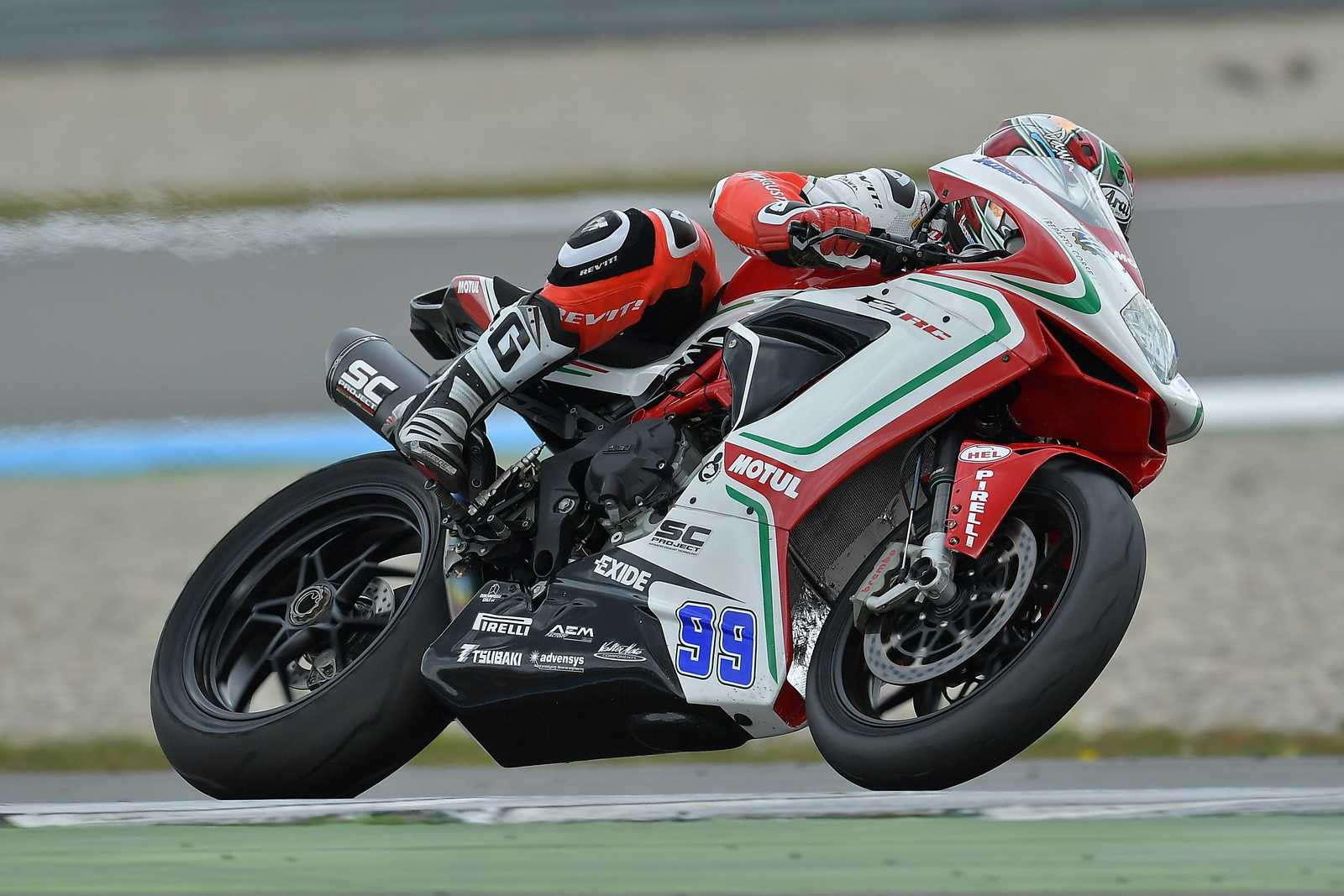 Leading the way on Friday at the PATA UK Round was American rider PJ Jacobsen (MV Agusta Reparto Corse) who registered a 1’30.968 lap in FP2 to put him ahead of the rest of the field, his closest challenger being Kenan Sofuoglu (Kawasaki Puccetti Racing).

Sofuoglu trailed Jacobsen by just a +0.114s margin, whilst in third place on the timesheet Gino Rea (Team Kawasaki Go Eleven) was the fastest British rider on track in the WorldSSP category.

Two Frenchmen Lucas Mahias (GRT Yamaha Official WorldSSP Team) and Jules Cluzel (CIA Landlord Insurance Honda) completed the top five. Mahias is the championship leader after five races and he is looking for a fifth podium result of the year this weekend.

A red flag came out to interrupt the session briefly after a crash for Zulfahmi Khairuddin (Orelac Racing VerdNatura) had left debris on track. The diligent marshals quickly cleaned the track following the incident and the action was soon back underway.

On Saturday at the PATA UK Round the WorldSSP riders will participate in their FP3 session at 9.45am local time, before SP1 at 12 midday and SP2 at 12.25pm.

CIA Landlord Insurance Honda’s Jules Cluzel found the pace in this afternoon’s World Supersport Free Practice 2 at a sun soaked Donington Park. After being slightly off the pace in the morning session Jules found a really good rhythm and improved his lap time by half a second in the afternoon to finish the day in 5th position. He said: “I am really happy because we found the pace. I was really strong in the last exit and I feel a lot more comfortable. I feel like I can just go faster. There was a lot of traffic at the end and I tried to find a way be alone but it was not possible. Then I saw Kenan and I tried to see what he was doing better than me but I was quicker than him. He made a mistake and just blocked me so I did another lap and I did 31.4. I just feel like I can go a lot quicker so I am happy.”

Joining him in Superpole 2 tomorrow is Hikari Okubo who also upped his pace in the second session, getting into the 31s and is placed just below Jules in 6th position on the timesheet.

Donington Park first-timers Robin Mulhauser and Hiromichi Kunikawa concluded the first day of practice in 26th and 32nd respectively. Robin is struggling to get to grips with the circuit and he will examine the data with his crew to see where he can improve for FP3 and qualifying tomorrow. Hiromichi improved his lap time in good steps in each session and by the end of the day was lapping almost 1.5s faster.

CIA Landlord Insurance Honda Team Manager, Simon Buckmaster said: “It was a really good day for Jules and Hikari. Jules found a good rhythm and was doing 31s consistently. It was good for Hikari to get a tow from Jules, a great example of teamwork for CIA Landlord Insurance Honda. We were a little bit off in FP1 but now we are right on the pace. We might be able to find a little bit to improve in FP3 tomorrow to look for a front row in qualifying.”

“Robin was still struggling. It’s hard to see why now we have two riders on the pace. We will compare the data to see where he is losing and where he is gaining.”

“Hiromichi is closing the gap on the pack in front of him. It’s his first time here and he is doing a good job.”

More, from a press release issued by MV Agusta:

Two weeks later from the round in Imola, Italy, Team MV Agusta Reparto Corse’s riders are back on track at the iconic Donington Park circuit, round n°6 of the MOTUL FIM Superbike World Championship.

With ten riders in the gap of just 1 second, the first of two free practice sessions on the English circuit saw Leon Camier and his MV Agusta F4 RC machine close with the 8th time (1’28.681) in the timesheet, just 0.853s far from the leader Jonathan Rea. In the second and last heat of the day, the rider from Ashford (Kent) failed to improve his pace, also because of the hot temperature, closing with the 9th time in the combined result, entering the Tissot-Superpole2 of tomorrow.

Patrick Jacobsen opened this first day of action with the best time in the combined WorldSSP timesheet. The rider n°3 in the overall standings has immediately found a great feeling on his MV Agusta F3 675, setting the 2nd fastest time in the FP1 and the provisional pole position in the afternoon heat, with a best lap of 1’30.968.

Team-mate Alessandro Zaccone finished with the 2nd best time in the ESS ranking and 20th time in the WorldSSP class.

On the occasion of this race weekend, all the riders and crew at Team MV Agusta Reparto Corse want to pay tribute to memory of Nicky Hayden: a classy rival on track, a friend and undisputed champion who has recently passed away.

Leon Camier #2 WorldSBK – Today wasn’t the best day for me. We had to miss most of the first session so I couldn’t get so many information and data about the setting of the bike. Anyway, I am confident we can make some good sessions tomorrow considering we are in top 10 and there is still room for some improvements on the bike.

Patrick “PJ” Jacobsen #99 WorldSSP – It was a really great day for me and the team as well. We worked hard on my race pace in session two and we managed to close in P1, so tomorrow my goal remains to fight for the pole position and, hopefully, for the podium on Sunday’s race.

Alessandro Zaccone #61 ESS – I am little bit disappointed as we have come back to the situation we suffered in the first races, but we’re trying to analyze the data we got from these first sessions to figure something out and get back to the top position.