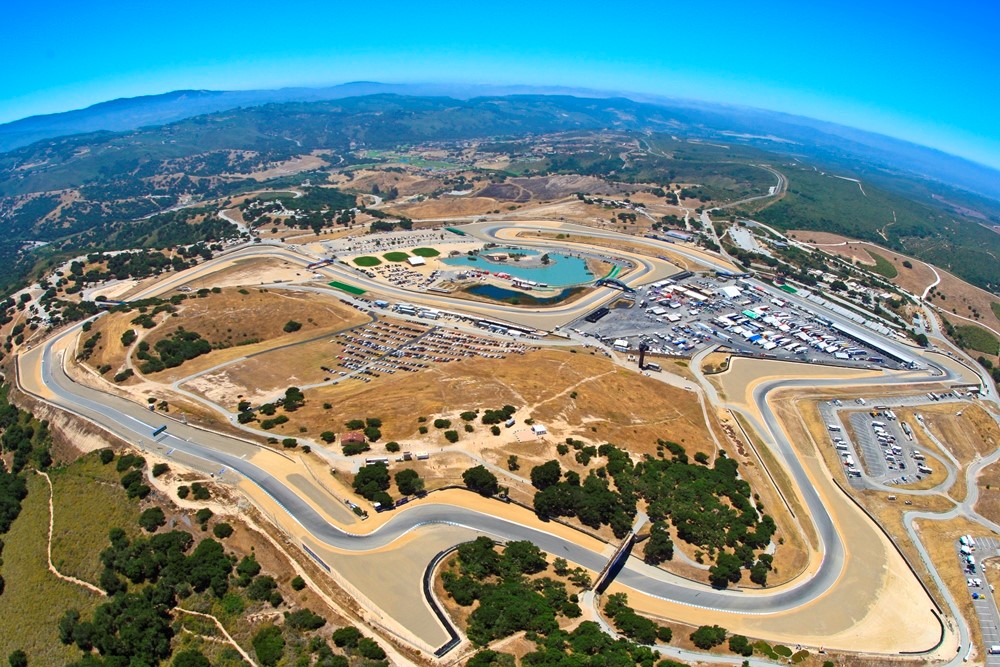 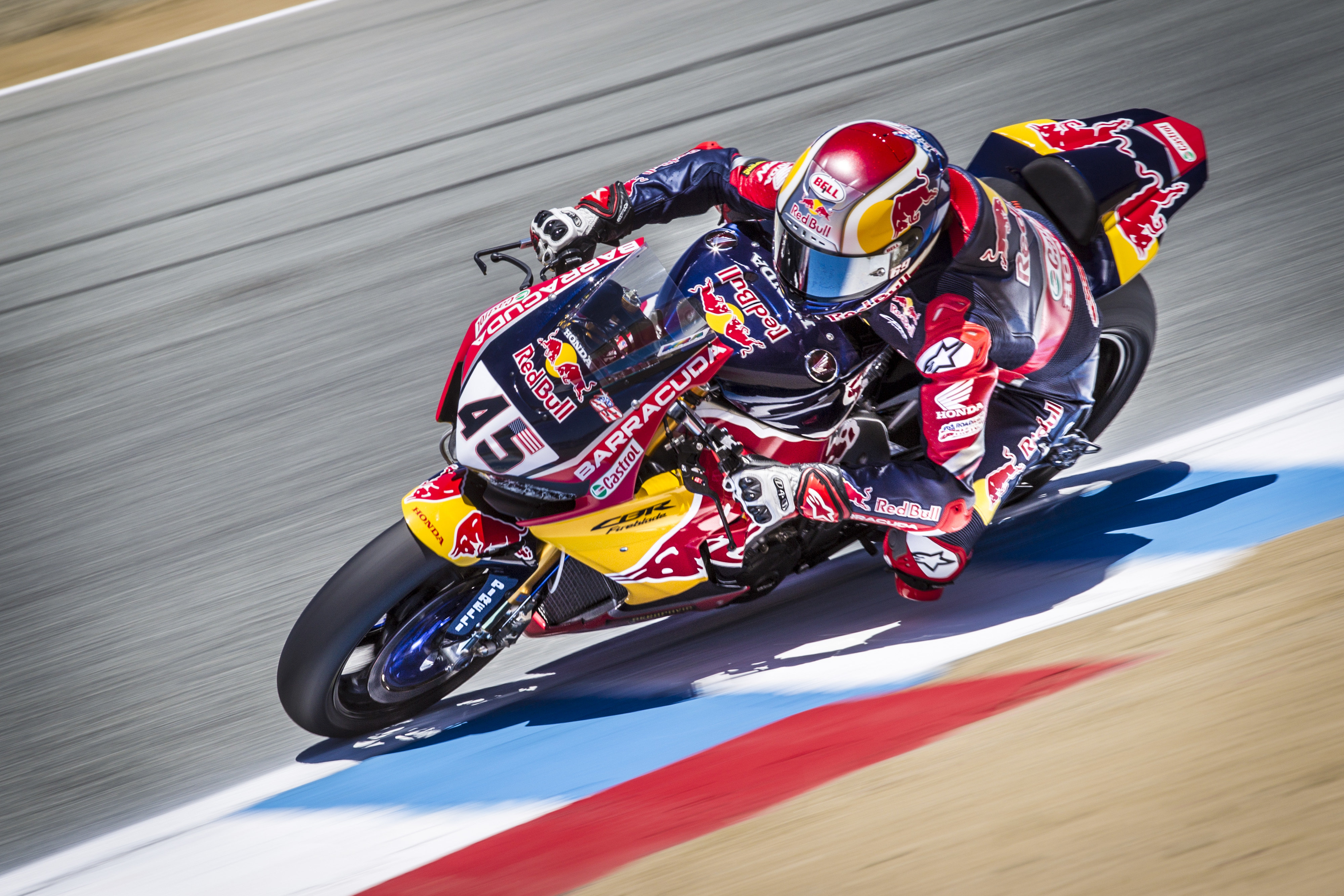 Both locally and internationally, WeatherTech Raceway Laguna Seca has become hallowed grounds for motorcycle road racing. It began with the first AMA national hosted in 1972 that was won by the late Cal Rayborn on a Harley-Davidson. Between 1974 and his retirement in 1983, Roberts dominated on the famous track with seven wins.

The history between WeatherTech Raceway Laguna Seca and motorcycle road racing truly intertwined in 1988 when the track was lengthened from 1.9 to 2.214 miles and eventually to 2.238 miles to accommodate Grand Prix motorcycle racing, which was hosted in the United States for the first time since Daytona in 1965. Lawson won the event en route to his third of four career 500cc championships while fellow countryman Jim Filice scored his only win on the world stage in the 250cc category. 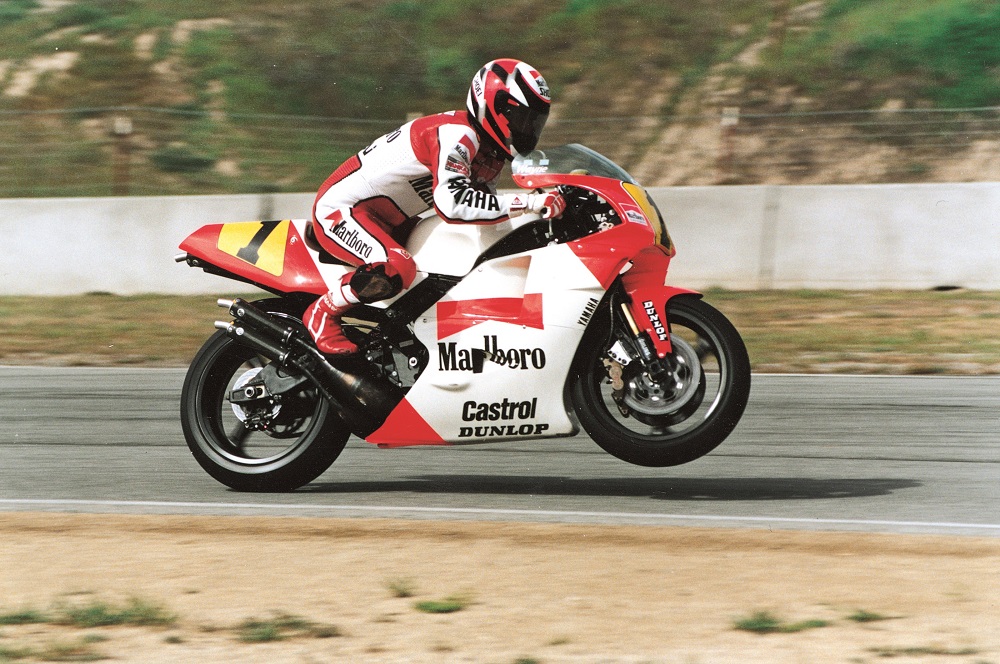 Monterey resident Rainey dominated the event with three consecutive wins between 1989 and 1991. His influence in American motorcycle road racing continues to loom large as president of MotoAmerica. John Kocinski, who won twice previously in 250cc, won the 500cc class on a Cagiva in 1993 before the unbeaten streak of American riders finally ended in 1994 (there was no event hosted in the U.S. in 1992).

World Superbike was hosted at WeatherTech Raceway Laguna Seca from 1995 through 2004. Kocinski won one of the two 1996 events on a Ducati and swept the 1997 races on a Honda. Ben Bostrom equaled the standing track record of three World Superbike wins shared by six competitors including two who are active this year (Welshman Chaz Davies and Britain’s Tom Sykes). “Texas Tornado” Colin Edwards also put a win in the books in 2002.

Grand Prix motorcycle racing returned in 2005, and emotions ran high when the late Hayden scored his highly-anticipated first win on his home stage in 2005. The “Kentucky Kid” repeated the feat in 2006 during a season in which he battled Valentino Rossi to become the most recent American rider to win a World Championship.

Rossi, the great Italian rider, etched himself into WeatherTech Raceway Laguna Seca folklore in 2008 when he executed a daring pass on the Corkscrew against Australian Casey Stoner. Stoner won the event during three other seasons.

World Superbike returned to the WeatherTech Raceway Laguna Seca in 2013 with Davies and Sykes winning thrice and three-time World champion Jonathan Rea from Northern Ireland winning on two occasions. In that span, the only American rider to grace the podium was Hayden with a P3 finish in 2016.

Different Paths, Same Goal
Considering their respective ambitions, countries of origin, and age gap of merely 20 days – Jacobsen is older with an August 7, 1993 birth date – it may come as a surprise to the casual fan that the paths of Gagne and Jacobsen hadn’t crossed on their way up to World Superbike. In fact, they would have been hard pressed to map out motorcycle road racing careers designed to avoid each other any further before their rookie seasons in the series.

“Before this year, I’m pretty sure we’ve never been on the track together,” said Gagne. “I know he raced a little bit in the States, but by the time I got back to race in MotoAmerica he was going racing in Europe. I didn’t know him that well at all until this year. He’s a really good guy and obviously a heck of a rider. Both of us want to do well for America and the people back home and to try to bring some Americans back into the World Championship. We’re heading in that direction.”

Gagne grew up in Ramona, Calif., and now resides in San Diego where he has incorporated surfing as a means of staying in shape in addition to riding and other training. He got his start in motocross at 4 years old. He was the Amateur National Motocross champion in 2005. He didn’t race on a paved circuit until 2008 when he won two events on the Red Bull U.S. Rookies Cup. In fact, his first time racing at Laguna Seca at 14 years old was at the same Red Bull U.S. Grand Prix where Rossi famously overtook Stoner on the Corkscrew.

He was one of three Americans selected for the following year’s Red Bull MotoGP Rookies Cup. At 15 years old, he embarked in competition across European circuits in 2009. As the only American representing the following year, he won the 2010 Red Bull MotoGP Rookies Cup with four wins in 10 rounds. Despite the travel and training, Gagne managed to graduate high school with a 4.0 GPA.

The experience in Europe jumpstarted Gagne’s road racing career and veered him away from pursuing the top levels of motocross. He continued his development domestically in MotoAmerica where he worked his way up to their Superbike category. As Gagne came back home to the States, Jacobsen went the opposite direction following a stint on the AMA circuit. 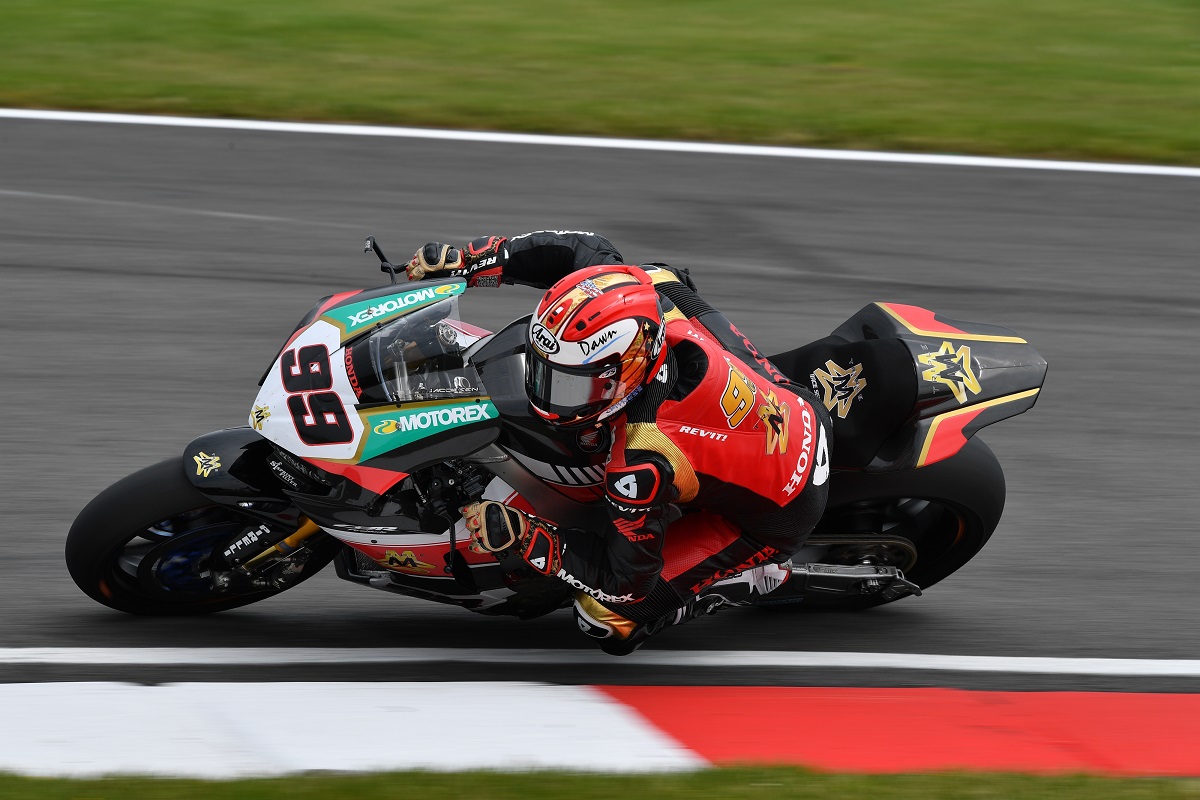 Like Gagne, Jacobsen cut his teeth in dirt racing, although he did so on the East Coast as a native of Upstate New York. He was a second-generation dirt tracker following the footsteps of father Patrick. After giving road racing a try, he got an opportunity to compete in AMA with Celtic Racing at 17 years old which garnered the attention of Tyco Suzuki, who brought him to Great Britain to quickly ascend through the Superstock, Supersport, and Superbike classes.

Jacobsen’s success in British Superbike led to more opportunities in the Supersport World Championship over four years, having his most remarkable season in 2015 when he finished second in the Supersport World Championship standings with five consecutive podiums toward the end of the season racing with Honda including a pair of wins in Malaysia and France. He made history in the Malaysian round by becoming the first American to score a win and pole position in the series.

Gagne made his World Superbike debut with the Red Bull Honda World SBK team last year at WeatherTech Raceway Laguna Seca and managed to finish in the points. After two more appearances with the team, he signed on full-time for 2018. Meanwhile, Jacobsen found the right opportunity to move up to the next level with the upstart TripleM Honda WorldSBK team. Having battled with top international talent and each other all season, both are looking to take the next step at their home race.

“Laguna Seca is always such a special track,” said Jacobsen. “I’ve never raced World Superbike in America in front of my home fans and home crowd. I was 17 last time I raced there. I’m 24 now and going back to Laguna Seca racing at the World Championship level. It’s awesome. I’m looking forward to it.”

“I’ve had a lot of good memories at Laguna Seca,” said Gagne. “The very second time I ever rode a road race bike was there. The first test for Red Bull Rookie Cup in 2008 was at Laguna Seca. I remember going down the Corkscrew in a 125cc. 10 years later, I’ll be going back down there on a World Superbike, which is pretty crazy. I’ve had a lot of good races over the years in the 600 class in AMA and MotoAmerica and a couple good years on the Superbike and Superstock.

“Obviously, it’s such a unique track. I’ve got to see a lot of track in the last few years, and Laguna Seca is without a doubt one of my favorites in the entire world. I’m really excited to get back there again on a World Superbike for the second year in a row. This is definitely really special to go back to my home country and home state of California.”

The Wild Card
Wild card entrant Herrin will be on the World Superbike grid for the first time. The 28-year-old rider will be pulling duty in both World Superbike and MotoAmerica Superbike on the same Attack Performance/2 Wheel Legal Yamaha YZF-R1.

The 2013 AMA Superbike Champion is confident in the unorthodox plan since it is nothing out of the ordinary with team owner Richard Stanboli, with whom they built an entire bike in four weeks prior to coming to an agreement this offseason. Years earlier, Stanboli had built his own Grand Prix motorcycle and finished in the points with rider Steve Rapp in 2012. The World Championship and MotoAmerica bikes are quite similar with the exception of the tire.

“It will be fun,” said Herrin. “I think our bike will be really competitive. We have a chance to fight in the top 10. We have a good bike right now. The bike is exactly what the World Superbike guys are running without the tires, and we have a great program. The focus on Friday will be adjusting to the Pirelli tire.” 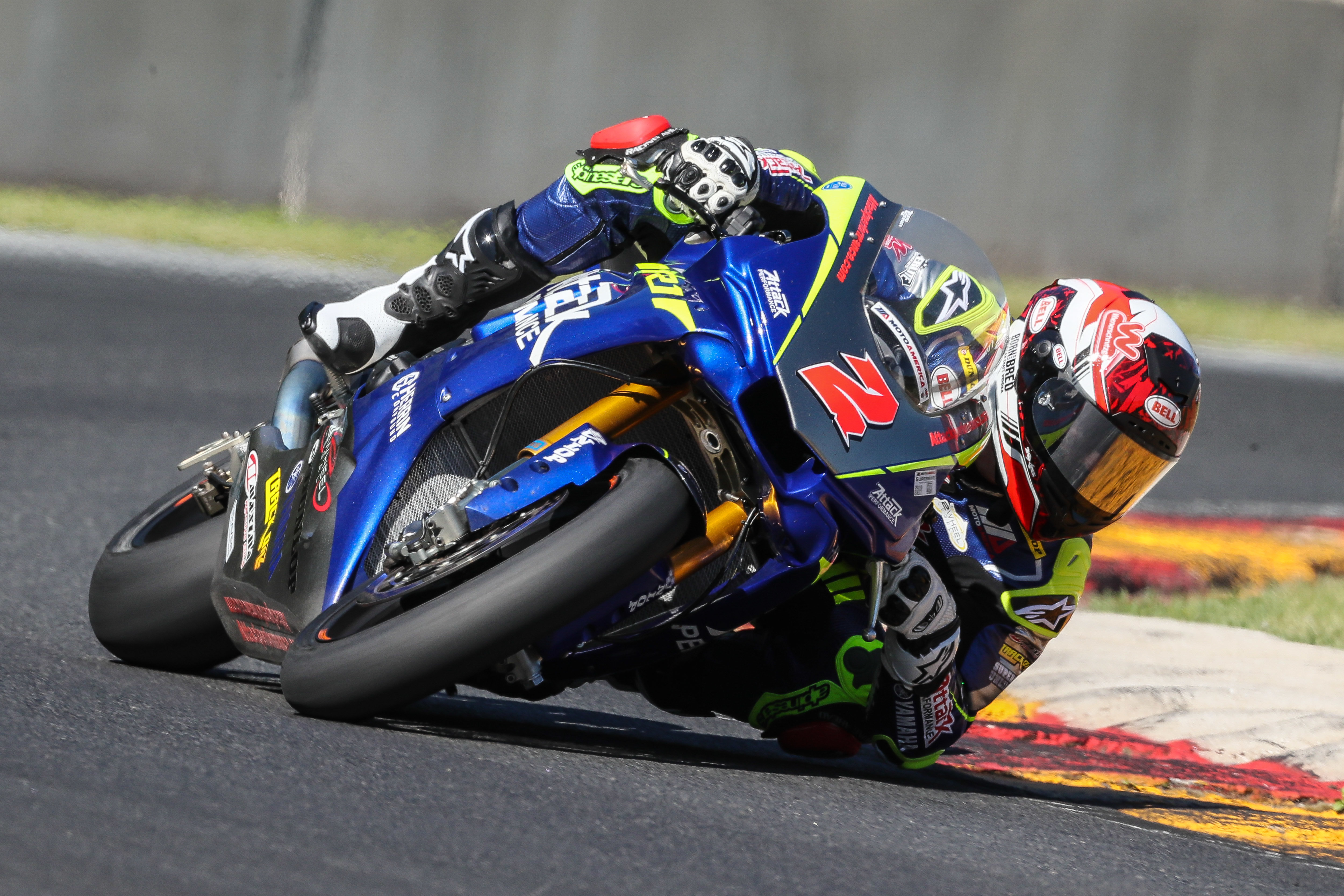 Herrin grew up in Glendale, Calif., but now resides in Dublin, Ga., where he owns a Supermoto track with his family called Herrin Compound that develops young riders. He is coming off a thrilling MotoAmerica event at Road America where he fought up front in both races and narrowly trailed double-winner Cameron Beaubier at each finish. The momentum of that event in combination with the prospect of finally racing in World Superbike at a home track has Herrin eager for the MOTUL FIM Superbike World Championship GEICO Motorcycle U.S. Round featuring MotoAmerica Championship of Monterey.

“I think the team is super pumped to be heading to the weekend at Laguna Seca,” said Herrin. “We’re riding a wave of confidence right now. We should be prepared and ready to fight. Laguna Seca was where I got my first ever professional win in 2007. I got my first and second championship here. It’s been a special, special track for me. A lot of it also has to do with Nicky Hayden getting his first MotoGP win there. He was a hero of mine, and I was there to see it.

“Having the support of the entire MotoAmerica fan base is a really big deal, too. Fans who are usually rooting for Toni Elias or Cameron Beaubier or Garrett Gerloff or anyone else in MotoAmerica will be rooting for all three of the Americans in World Superbike. That is something really special and motivating. It’s cool to race against some of my buddies that I’ve raced with in the past. P.J. Jacobsen is a kid who I kind of grew up around and raced 600s with back in the day. I grew up racing with Jake Gagne. This is something totally special that I’ve always wanted to do.”

The Extravaganza
This year’s MOTUL FIM Superbike World Championship GEICO Motorcycle U.S. Round featuring MotoAmerica Championship of Monterey carries on the tradition of world-class motorcycle racing at WeatherTech Raceway Laguna Seca. Whether it be in the World Superbike or MotoAmerica series, two-wheel machines will be going over 170 mph down the straightaway and leaning tight into the 11 turns that comprise the circuit. 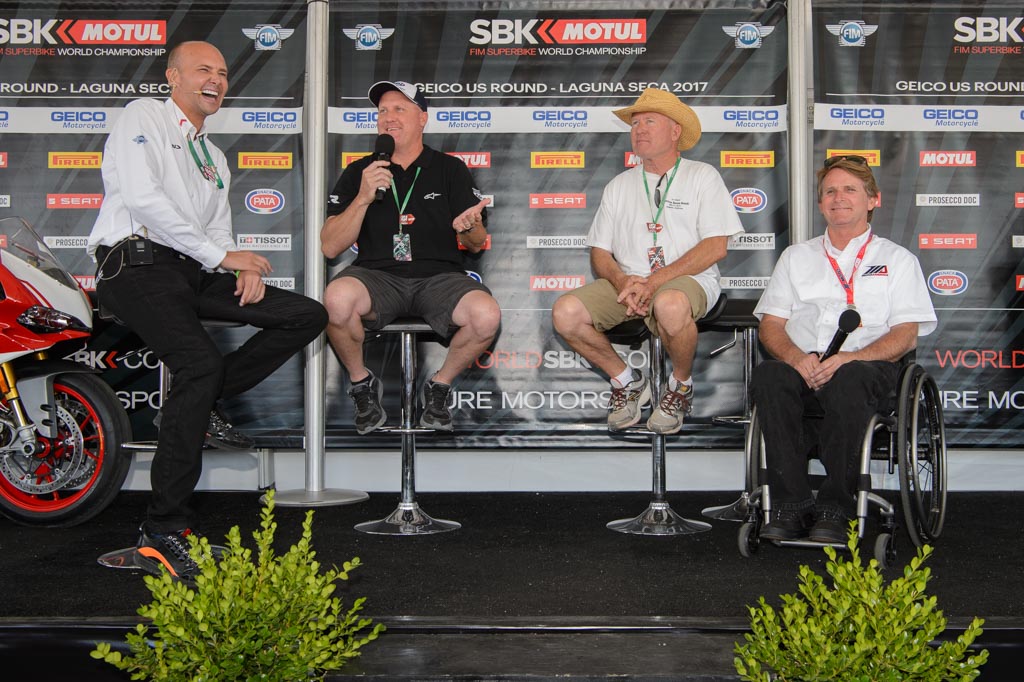 Legendary champion riders like Rainey, Lawson, Roberts, and Kenny Roberts Jr. will be on-hand with the hub of activity being the Paddock Showcase stage. Host Michael Hill will entertain and educate fans throughout the weekend with every rider in the paddock participating at different points throughout the three-day event.

Saturday racing activity will close with a Nicky Hayden Tribute Walk during which all fans are free to walk the track, take pictures, and pay tribute to the late fan favorite.

Special Ducati Island, Kawasaki, and VIP ticket packages are still available. Admission is available at advanced pricing through Father’s Day this Sunday at www.WeatherTechRaceway.com or by calling 831-242-8200.