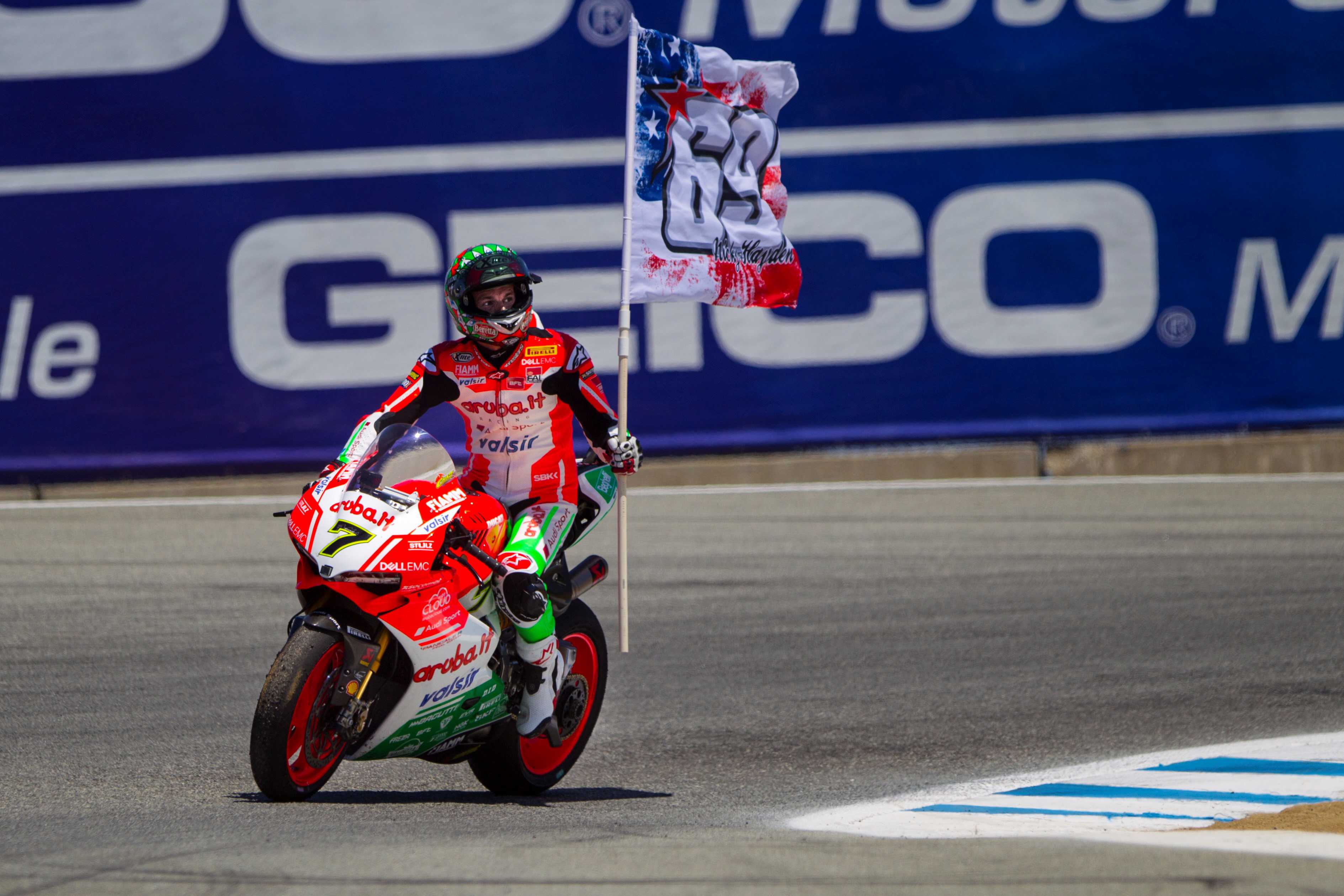 MONTEREY, Calif. — World Superbike competitor Chaz Davies is a man of many talents. The rider of the No. 7 Aruba.it Racing Ducati is among the top motorcycle road racing talents across the globe. Additionally, the Welshman has shown his aptitude in the visual arts realm with a series of vlogs (video blogs) that he began this year.

With three previous victories at the event, Davies enters the MOTUL FIM Superbike World Championship GEICO Motorcycle U.S. Round featuring MotoAmerica Championship of Monterey at WeatherTech Raceway Laguna Seca on June 22-24 in a tie for the track record for most World Superbike wins. The only other active competitor in the six-way tie is Kawasaki rider Tom Sykes. Davies is one of four riders to sweep both races at a given event after doing so in 2015, though his Race 1 win at WeatherTech Raceway Laguna Seca in 2017 was perhaps his most memorable.

Declared fit to race following a scary accident at a previous event that left him with back injuries, Davies returned to the seat of his Ducati weeks later to score an emotional victory. Six weeks after the tragic loss of fan favorite champion rider Nicky Hayden, the thoughtful Davies spotted a No. 69 flag honoring Hayden in the grandstands following his victory and had a corner marshal retrieve it for him to carry during his victory lap.

Currently No. 2 in the World Championship standings, Davies has endeared himself to fans away from the track by revealing what goes on behind the scenes through a series of vlogs that he records and edits himself. Fans are taken behind the curtain to see that it isn’t all glamour for riders who compete on the world stage.

Davies answered questions below about WeatherTech Raceway Laguna Seca’s 11-turn, 2.238-mile circuit, what has made him so successful on it in recent years, visiting California, and the response to his vlogs.

Davies returns this year among a grid of 20 riders representing seven manufacturers and 11 countries, including three American riders. MotoAmerica also brings all four classes from the premier motorcycle road racing series in the United States to the event.

Meeting Davies is part of the special three-day Ducati Island ticket package that also includes a parade lap around the track on Sunday among other perks. Advanced ticket pricing is available through Father’s Day this Sunday at www.WeatherTechRaceway.com or 831-242-8200. 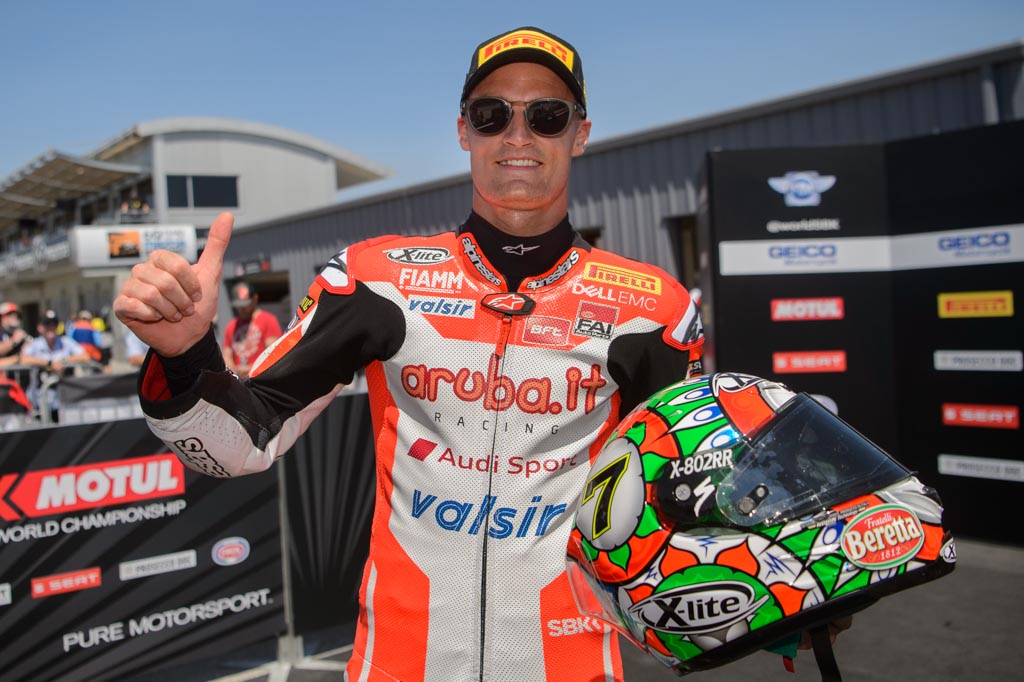 Describe the challenge of competing at WeatherTech Raceway Laguna Seca.
Laguna Seca is a tough track. There are a lot of technical parts to it. There’s off-camber, on-camber, uphill, downhill, banked corners, hairpins, open stuff, and obviously the Corkscrew itself. Every corner there is quite different from the next. It’s hard to set the bike up. It’s quite a punchy track, so you want a bike that doesn’t wheelie too much, meaning you want a bike that’s a bit longer. At the same time, you also want a bike that’s a bit nimble for quick changes in direction in the last part of the track. It’s always a bit of a trade-off and quite challenging.

What has contributed to your past success at the GEICO Motorcycle U.S. Round?
A great starting point is enjoying the track and the atmosphere of Laguna Seca that goes along with it. Being at Laguna Seca and in California in general is a great way to start a weekend. After that, I think the track suits my style. It’s one I really enjoy riding. There are a few tracks a year that present such a fun challenge to me and where it really, really caters to our style. We keep pushing and try to get quicker and quicker.

What do you look forward to when you visit California?
Firstly, just being in California. It’s a great place to be. I think I speak for every rider when I say we enjoy being there in California and America in general. There is a good vibe there. Everyone is friendly. Having raced in the States for a few years, I know people in the paddock who it is nice to see once a year. We tend to go a week early or spend a week after the race and spend some time in Monterey and Los Angeles. Ducati North America is kind enough to give us a bike to use to cruise through the canyons of Malibu. It is generally a fun week of doing some cool stuff. There is a lot to look forward to when we come to this race.

What prompted you to start creating vlogs?
I started doing some vlogs this year. I have a few out there. It is difficult to find the time to edit them in the heat of the season by the time I get home, recover from the weekend, and train. I don’t want to slap some raw videos of me out there. I do enjoy the challenge of editing. That’s half the fun for me. The other side of the fun is showing people that we don’t just turn up and twist the throttle on a Sunday. There is a bit more to it than that. We’re human beings at the end of the day, and sometimes that is not really shown all that well behind the scenes. For example, the first vlog I put up was about me driving to the track in my van – one-man band – setting my bike up, working on my bike, and going home again. People just automatically assume that, as a World Championship rider, everything is done for you and you turn up and everything is laid out for you and you don’t pay your track fee and all sorts of perks like that. In reality, it’s very different. That is sort of what I want to show from the vlogs. I wish I had a little bit more time to keep banging them out. Obviously, the priority is to do the business on-track. There will be more to come. Hopefully, we will have one from our trip to America. I look forward to smashing more out in the future and give people a bit of an insight.

How have fans responded to the inside look you have given them to the life of a World Superbike racer?
They’ve been received quite well. A lot of people have commented on how they’ve enjoyed the insight. Sometimes they are surprised by what they’re seeing. I think there is a lot more I can show as well but all in due time.