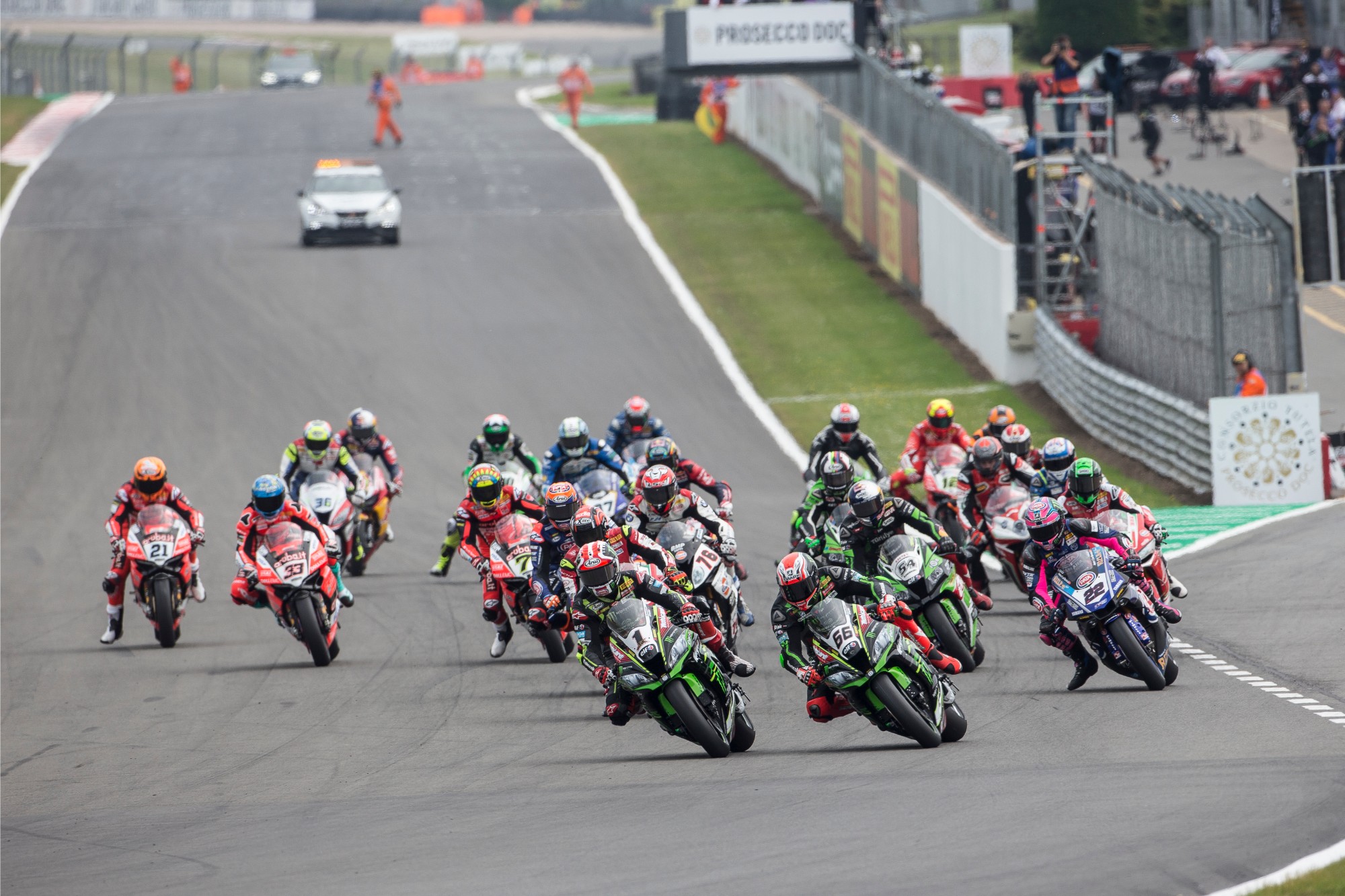 All bets are off

Donington Park awaits next chapter of Bautista vs. Rea championship scrap as title race rolls next into the UK

Donington Park, a spiritual home for World Superbike if there ever was one. A land of firsts, from Carl Fogarty’s maiden win in 1992 to Michael van der Mark (Pata Yamaha WorldSBK Team) last season and, let’s not forget, the very first MOTUL FIM Superbike World Championship races in 1988. Where it all began, and where it all begins again. Because if two months ago the winner of the 2019 MOTUL FIM Superbike World Championship may have seemed a foregone conclusion, now we’re facing the closest title race in years, after the trials and tribulations of Álvaro Bautista (Aruba.it Racing – Ducati) and Jonathan Rea (Kawasaki Racing Team WorldSBK) in the Riviera di Rimini.

Sometimes the longest way around is the shortest way home. Since Phillip Island, Rea has jumped from second place to second place, keeping calm and steady, even when outpaced on a race-to-race basis. The head to head between him and Bautista reads 14-5 in the Spaniard’s favour, but that’s not what counts. Neither do massive winning margins, not even overall race wins (14-4 to Ducati). The one deciding factor is points and Rea is a meagre 16 behind, despite all the above.

How did we get here? Bautista cited over-confidence, track conditions and the added weight of a full fuel tank as potential explanations for his Misano, Race 2 crash, but little did that matter the moment the V4 R surrendered beneath him on lap 2, just like it had two weeks before. All the momentum that Bautista had has been lost in two flashes of the eye. One more and the championship lead will be lost too.

The gap could have been even shorter too, had it not been for van der Mark’s huge Jerez, Race 2 win; his first since that season-defining double in Donington last year. Unfortunately, the recovering Dutchman seems unlikely to feature in this year’s Prosecco DOC UK Round, leaving the reins to teammate Alex Lowes (Pata Yamaha WorldSBK Team), who was desperately unfortunate not to deliver another win for the Japanese manufacturer under the deluge in Italy.

The Englishman, based just a few kilometres away from the Leicestershire track, will not be content with playing second fiddle to the championship frontrunners. Neither will Toprak Razgatlioglu (Turkish Puccetti Racing), part of an ever-growing cast of threats to Rea and Bautista. He featured in an all-Kawasaki podium at Misano, but it was his performance in particular which caught the eye as Kenan Sofuoglu’s protégé sprang upon Rea in the last lap of Race 2.

After that race, Razgatlioglu repeated the same words he expressed in Jerez a fortnight earlier: He wants a race win and Donington Park is the place to do it. The 22-year-old’s second place in Misano was certainly a revelation, as was his out-of-the-blue podium in the UK last season. Is a win a matter of when rather than if? Razgatlioglu would certainly hope so, but even amongst the Kawasaki ranks he will face absolutely ruthless competition, with Rea and Leon Haslam (Kawasaki Racing Team WorldSBK) – who has perhaps recorded more laps around Donington than any other rider in the world since debuting in the 125cc World Championship there back in 1998 – not willing to back down against the valiant sophomore.

Razgatlioglu could do worse than follow the career path of Tom Sykes (BMW Motorrad WorldSBK Team), who also took his first WorldSBK podium in a Race 2 at Donington Park – only in 2008, rather than 2018. As fate would have it, the Yorkshireman also made a huge breakthrough at Misano by handing BMW their best result in nearly six years, and just in time for his favourite race of the year. Those nine wins on the trot (Race 1, 2013 to Race 1, 2017) at Donington speak for themselves. It may still be early days for the S1000 RR, but in the UK it’s never wise to overlook the 2013 World Champion.

While we’re on the topic of hopeful race winners, what about the first man to hit gold for BMW way back in 2012? That was Marco Melandri (GRT Yamaha WorldSBK) and the circuit, of course, was none other than Donington Park, where his teammate Sandro Cortese last won in the World Supersport class, just last year. A decade earlier, the 4.023km circuit witnessed Ryuchi Kiyonari’s (Moriwaki Althea Honda Team) last WorldSBK race win; the next UK round, one year later, saw his colleague Leon Camier enter the championship for the very first time.

In the World Superbike championship, all roads don’t lead to Rome, they lead to Donington Park. The ‘heart of British motorsport’ always manages to sneak onto the resumé of every successful rider in the series; sometimes it’s a starting point, others a mandatory stop en route to greater things, and occasionally a destination in itself. This season it could be all three. Seven rounds down, six left, read it as zero hour or square one; either way, the UK Round promises to be anything but unremarkable.