World Endurance: How To Watch The 24 Hours Of Le Mans

World Endurance: How To Watch The 24 Hours Of Le Mans

Fans around the world will be able to watch thrilling live coverage of the 44th edition of the 24 Heures Motos. Held behind closed doors, the first race of the 2021 FIM EWC season will be flagged off at 12 noon CEST on Saturday 12 June at the Bugatti circuit at Le Mans.
Fans around the world will be able to watch live coverage of the race. To ensure they do not miss out on the spectacular start to the opening race of the world Endurance season, the live coverage will start on Eurosport 2 from 11.45pm on Saturday and continue for the first few hours, and will then transmit the intensity of the last five hours of the race from 7am all the way to the finish line and the podium ceremony.

Eurosport France is also inviting fans to experience the magic of Endurance at night. Besides the start of the race, Eurosport 2 will provide live coverage from 7pm on Saturday to 12.30am on Sunday.

The full race can also be watched live online on Eurosport’s digital platform with commentary in English and French.

Beyond the Eurosport network, the 24 Heures Motos will be available for viewers throughout the world. In France, the channel L’Équipe, which has shown the FIM EWC since 2016, will provide live coverage of the race starting at 11.30am and return in the evening, then show the race live again from 7am on Sunday through to the podium.

RTBF Auvio in Belgium, RTL Play in Luxembourg, Servus TV in Austria and RTVS in Slovakia will all provide full live coverage of the race.

In North America, the platform OTT Motortrend will stream full live coverage, as with all the other races this season.

In Japan, JSports will show live coverage of the start on Saturday from 6.45pm to 10pm JST and again on Sunday from 5pm to 7.30pm.

In New Zealand, Sky NZ will show live coverage of the race.

The international platform Motorsport.tv will give fans a chance to see full live coverage in the Americas, Africa and Asia.

The highlights programme further enlarges the international broadcast of the FIM EWC. In Europe, the highlights will be shown on Sky Sport in Italy, Motowizja in Poland and TV3 Sports, a channel owned by the group AM Baltics. MAV TV will show the highlights in the U.S., SuperSport and StarTimes in Africa, Dubai Sports in the Middle East, Bein Sports in Asia, Nippon TV in Japan, Astro in Malaysia and True Visions in Thailand.

Eurosport Events is further enriching its 360 EWC Fan Tour experience, successfully launched last August at Le Mans. The interactive platform combines virtual reality and 360° videos. It will be available free of cost from midday on Friday 11 June on any computer, tablet, smartphone or VR headset on www.ewc360fantour.com

The programme has 12 videos to transport fans to the heart of Endurance action with on-board tours, a street view-style discovery of the pitlane, a pit stop as experienced by a mechanic, and much more. Three live videos are also programmed before the starting grid and then in the pitlane during the race. 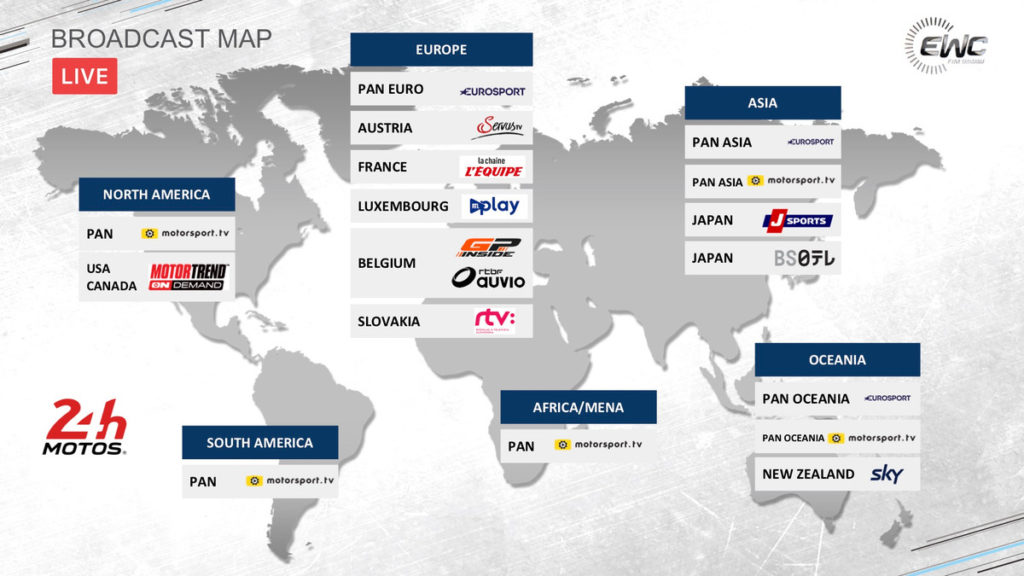 World Endurance: Teams Test Ahead Of 24 Hours Of Le Mans

There are two changes to the calendar of the 2021 FIM Endurance World Championship. Initially ...
Read more

World Endurance: 24-Hours Of Le Mans Cancelled Due To COVID-19