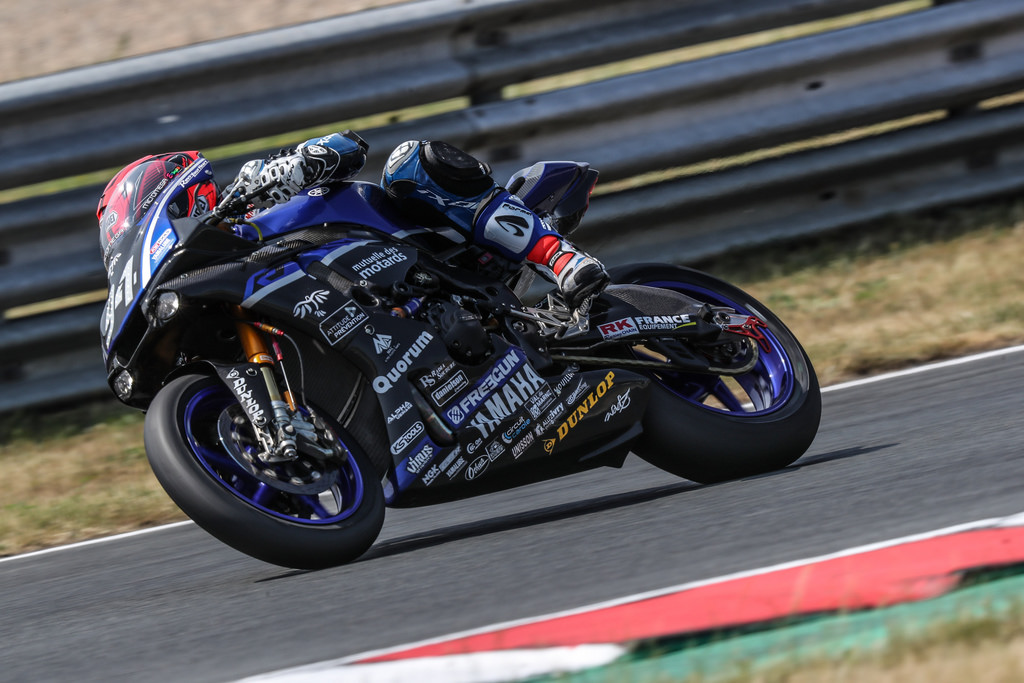 A major upset this morning in the second round of qualifying at the 8 Hours of Oschersleben: GMT94 Yamaha took pole position ahead of F.C.C. TSR Honda France and Suzuki Endurance Racing Team. Moto Ain claimed ninth place on the grid and hence the top spot in the Superstock class.

David Checa, Niccolò Canepa and Mike Di Meglio pulled off a clockwork performance in the second round of qualifying at the 8 Hours of Oschersleben. All three GMT94 Yamaha riders lapped under 1:27 on the Motorsport Arena, thereby propelling their team to pole position in the 4th round of the 2017-2018 FIM EWC. GMT94 Yamaha will line up on the grid ahead of F.C.C. TSR Honda France and Suzuki Endurance Racing Team.

The other surprise of the day was Yamaha team Moto Ain. The Yamaha-mounted team made a last-minute dash to pick up 9th place on the grid and top spot in the Superstock class. After putting in some hard work during yesterday’s first qualifying, Roberto Rolfo, Alexis Masbou and Christoffer Bergman went full gas this morning. They placed ahead of BMW-mounted Mercury Racing, who will race without Jakub Smrž, injured in qualifying yesterday. Moto Ain gained the upper hand over Yamaha Viltaïs Experiences, No Limits Motor Team and Junior Team Le Mans Sud Suzuki in the Superstock class.

All eyes will be on the Superstocks tomorrow, as Oschersleben is the final race of the season in this class. Current standings leader Tati Team Beaujolais Racing will have their work cut out to hold on to their lead and carry off the FIM EWC Superstock World Cup.

The 8 Hours of Oschersleben will be flagged off at 1pm CEST tomorrow (Saturday).

More, from a press release issued by Honda Endurance Racing:

The strategy was set ahead of this weekend to run a more representative setup for tomorrow’s eight-hour race, and has helped the team arrive at a setup which will be part Q1-spec and part Q2-spec, and puts the trio of Gregory Leblanc, Sebastien Gimbert and Erwan Nigon in a strong position headed into the series’ penultimate round.

The weather over the last two days has peaked at a sweltering 31 degrees Celsius, and much the same is expected for tomorrow’s race around the 3.66km Oschersleben track, which starts at 1300h local time.

It was a positive day today and we can be happy that we have closed the gap on both overall fastest lap and average lap whilst not focusing on outright qualifying pace. We took the decision before this weekend not to use qualifying as traditional qualifying, but to focus on race setup. We made some changes to the bike overnight and took a step forward with the front end but made a change to the rear for Q2 that the riders were less comfortable with, but Q2 today allowed us to prove that and puts us in a confident position ahead of tomorrow’s race. We’ll use warm-up to corroborate our final changes and race setup, but we’re feeling positive and we’ve made good progress since Slovakia and Le Mans which we are very pleased with.

I’m very happy with this morning’s qualifying session. My goal was a 1m 26.9 and that’s what we achieved. I found 0.5seconds since yesterday’s Q1 session – the track was cooler this morning for my run which made it easier on the tyres but we also found a good feeling on the bike. We changed the setup since yesterday which made it much better for me. We still need to adjust a little but I’m happy. Yesterday the laptime was ok but I didn’t feel so comfortable on the bike but after the changes we’ve improved the pace and it was easier to ride so we made good progress and I think are in a strong position for tomorrow’s race.

I’m not happy with today from my side, but as a team to be just 0.36sec off pole is good so we can be pleased with that. I struggled a little with grip with the rising temperature, but also I’m not 100 per cent fit. Last week I injured my left knee whilst training on my mountain bike – it wasn’t a crash, but I felt some shock through it. Now on the bike I’m not totally comfortable and my laptime is suffering. Normally we’re all the same pace the three of us, but this weekend Greg and Erwan have made good laptimes but I’m further off. We could have been further up the grid so it’s a bit tough for me, but overall we can say we’ve made good progress and are in good shape for tomorrow.

We used a race tyre for qualifying which was our strategy coming into this weekend to get more representative data ahead of the race. Yesterday I was very happy on the bike and the laptime was good, and we made some changes to the bike overnight to try and improve. We improved on the front but I don’t think the rear feels as good so we will go back to what we had. The temperature was again very high today so to push too hard wasn’t sensible, and anyway today was more about confirming our race setup. We’ve reduced the gap to the front a lot since Slovakia and Le Mans and we’re closer to the pace than ever which is very good. We have good race pace, and we’re feeling positive for tomorrow. It’s the penultimate round of the series so I think tomorrow’s race will be the time where the championship reaches a critical point ahead of Suzuka. We’ve made good progress with the team and with the new Fireblade so we’re feeling positive.

SUZUKI 3RD ON THE GRID FOR OSCHERSCHLEBEN 8-HOUR EWC

SERT riders Vincent Philippe, Etienne Masson and Gregg Black put their GSX-R1000 into second position in the opening qualifying session with a combined time of 1.27.238, then in this afternoon’s final qualifying, with Philippe’s and Black’s times of 1.27.340 and 1.27.038 respectively in Q1, Masson improved his time to score a 1.27.340, putting the 15-time World Champions just 0.282-seconds off pole setters GMT94 Yamaha.

Among the other Suzuki-mounted teams competing, No Limits Motor Team, an Italian squad competing in the Superstock category (12th at the general ranking and third in class), finished just ahead of the Junior Team LMS Suzuki, who are currently second in the series.

“The practice sessions went well, and we are confident for the race. We will have to maintain a very fast pace because our competitors are strong. But we really want to get a good result, which would reward the work of all our team.”

“Results of these tests are very positive, especially compared with last year. We

quickly have felt more comfortable, than with the former bike on this track. It’s a very

good and positive sign for the race. It’s time to show what the new GSX-R1000 can realise!”

“We are satisfied to be one more time at a good position on the grid. The team is working hard, and the bike improves each time we race. We need a good result this season and everything is ready to achieve this objective. We clearly want to finish on the podium.”