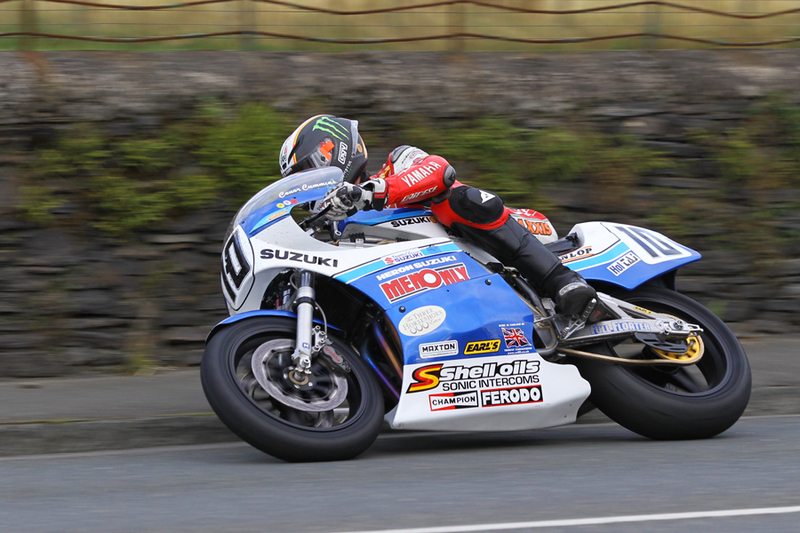 CONOR CUMMINS UP TO SPEED IN CLASSIC TT TO CHALLENGE MICHAEL DUNLOP After a short delay moving vehicles on the Mountain section of the Course, qualifying for the 2013 Classic TT presented by Bennetts duly got underway shortly before 6.40pm A number of the leading contenders including Team Classic Suzuki riders Michael Dunlop and Conor Cummins elected to take their Formula One machines out in the earlier MGP practice with Dunlop posting an opening lap of 122.837, improving his 120mph lap from the previous evening, with Cummins’ clocking 117.824. Cummins opted to go straight through on a second lap and improved his fastest lap of the week to 119.396mph, setting up Monday’s Motorsport Merchandise Formula One race for a dual between the two Team Classic Suzuki teammates. The majority of the Classic riders went out in the later session, which started at 19.05 with John Barton, TT and Classic TT rider liaison officer, first away on the Kawasaki ZXR. Riders were given the opportunity to practice their 60kmh speed limit through pit lane, giving grandstand fans the chance to see the sights and sounds of these stunning bikes being put through their paces. In the Bennetts 500cc Class Ian Lougher on the Flitwick Motorcycles Royal Enfield Seeley signalled his intent with a lap of 106.484 while William Dunlop on the Davies Motorsport Honda, with the number 11 plate, was well on the pace to Ramsey with 116.114 before dropping back on the Mountain section and cruising over the line to eventually post a lap of just over 100mph. With Team Winfield reporting an electrical fault on John McGuinness’ Paton, which prevented him from going out, Olie Linsdell consolidated his position as one of the pre-race favourites with a lap of 109.438 on the Giovanni Cabassi Paton. Kiwi Bruce Anstey confirmed his position as a race contender, powering his McIntosh Racing/Mobil 1 Norton to a lap of 107.277 ahead of Alan Oversby (105.981) riding the Davies Motorsport Honda, Chris Palmer on the Richard Shelton Racing Matchless (104.970) and Gary Johnson’s Lincs Lifting MV (104.195). Palmer would eventually go out on three different machines during the session and posted top five times on all of them. Dunlop and Cummins topped the board in the Motorsport Merchandise Formula One class with the times they posted in the MGP session but Mistral Racing Kawasaki’s Jamie Coward (116.305) and Paul Owen (113.936) both threaten to break in to the top ten ahead of some of the seeded riders. Seasoned campaigner Phil McGurk finished ahead of Chris Palmer in the Motorsport Merchandise Formula 2 Classic Qualifying with both posting 109mph laps while Dean Harrison, riding the Porter Racing BSA, was the fastest in the Motorsport Merchandise Formula Classic Class with 104.071 from Gavin Lupton (103.902) and Mark Parrett. Palmer (100.962) on the Ripley Land Racing Honda was the only rider over 100mph in the Okells 350cc class, ahead of Northern Ireland rider Jamie Hamilton (98.868) while Ewan Hamilton topped the 250cc leaderboard with 95.441mph. Doug Fairbrother was taken by airmed to Nobles Hospital following an accident at Sarah’s Cottage with a reported shoulder injury. More, from another press release issued by Isle of Man Festival of Motorcycling Press Office: MICHAEL SWEENEY AGAIN TOPS THE QUALIFYING BOARD AT THE MANX GRAND PRIX BUT CHALLENGERS START TO MASS Ireland’s Michael Sweeney again dominated qualifying at the 2013 Manx Grand Prix, posting the fastest time of the night on his Junior machine but a number of challengers started to emerge including Northern Ireland’s Andy Lawson who clocked 116.875 on the 750 Suzuki that he’ll ride in the Senior MGP. Bolton rider Stephen Harper, who returned to the MGP last year after an eight-year absence, was timed at 115.999 on his Triumph while Stephen McKnight, who will be looking to improve on the third places he achieved in the 2011 and 2012 Junior MGP, was fractionally behind Harper with 115.998. Czech Republic rider Kamil Holan, the 2012 Newcomer A race winner, posted his first sub 20 minute lap of the week with 113.244. In the SuperTwin class, James Cowton continued to show the form that won him the 2012 Newcomer C race, topping the leader board with a lap of 112.600, the fastest newcomer lap of the week to date. Colin Stephenson (110.092) and Rab Davie (109.869) also posted their fastest times of the week, just behind Michael Sweeney’s 110.239 from Tuesday’s session. In the Newcomers A class Northern Ireland rider Neil Lyons again topped the leaderboard with 108.155 from Anthony Cooper (107.044) and Australian Alexander Pickett (106.897), whose father Chris is competing in the Classic TT meeting. Callum Collister, from Douglas, was the fastest in the Newcomer B class with 105.368 with James Neesom, Joe Faragher, Stephen Ault, Jason Markham and Peter Minns all posting 100mph plus laps. Clitheroe based Ben Roe was the fastest Newcomer C rider (100.465) with David Howard also breaking the 100mph barrier, the pair finishing third and fourth in the Lightweight session behind Bob Barrington (102.126) and Colin Martin (101.698). Colin Purslow (Quarterbridge) and Scott Smythe (Railway) were both reported OK after incidents while Mick Neeson was sustained a hand injury following an accident at Keppel Gate. Adrian Bowman was taken by Airmed to Nobles but his injuries were not reported as serious.