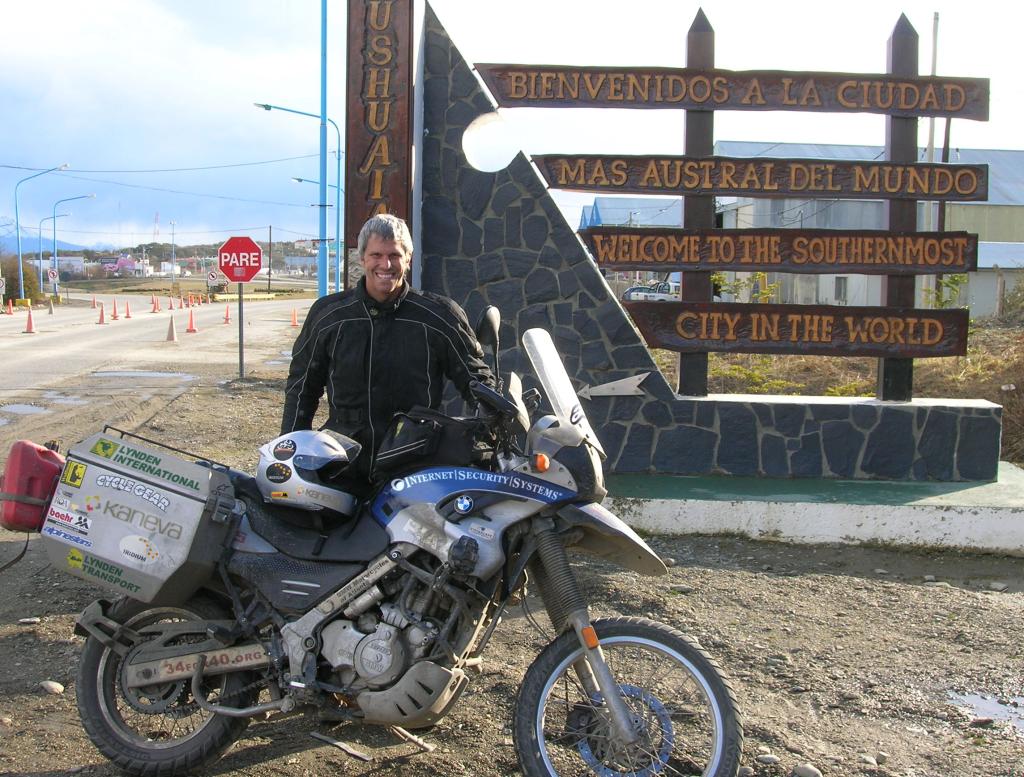 Previous Record Broken by 7 Days; a Fundraising Project for Pat Tillman Foundation PORTLAND, Ore. It’s a long and winding road from Prudhoe Bay, Alaska, to Ushuaia, Argentina 15,051 miles to be exact from the most northern milepost in North American to road’s end in South America. Now imagine riding that distance on a motorcycle. Then imagine doing it as fast as you dare, day after day, for nearly a month. David Gerulski, of Atlanta, Ga., did more than imagine such a ride: he did it. And he did it in record-setting style, setting a new motorcycle world record for the Trans-Americas journey: 27 days, seven hours, and 52 minutes. Riding a 2005 BMW F650 Dakar off-road bike, equipped with PIAA auxiliary lamps and halogen headlight bulbs, Gerulski departed Prudhoe Bay on September 1st and cruised into Ushuaia on September 28th, breaking the previous record by seven days. More important than the record far more important is that Gerulski took on the challenge as a fundraiser for the Pat Tillman Foundation. Tillman, as most Americans are aware, was a standout professional football player for the Arizona Cardinals. After 9/11, he gave up his gridiron career to become a member of the U.S Army Seals. Tragically, Tillman lost his life in Afghanistan. Gerulski, a family friend of Tillman, wanted to give something back to America in Tillman’s name. The 15,000-mile ride crossed 17 borders and traversed 14 countries. Many of the roads were unpaved. The weather varied wildly, putting Gerulski through rain, snow and high winds. Temperatures ranged from freezing to triple digits. To cover the distance in the required time, Gerulski rode an average of 16 hours a day, sometimes more, and four-to-six of those hours were at night, where the PIAA lighting kept the 43-year-old high-tech business executive on a safe path. “I started a bit slow, so I had make up time by riding long hours at night through jungles, mountains and deserts,” explained Gerulski, “The PIAA lamps and bulbs not only provided a clear view, but a real sense of security. Without them, I would never have set the record. Plus, it didn’t mater if I came across a moose, a cow or a llama, I lit ’em up from a hundred yards away with my PIAAs!” Despite the severe conditions weather, vibrations, road debris Gerulski’s PIAA lamps and bulbs a BMW 650 kit (PIAA p/n 74650) that included two 510 driving lights and a custom mounting bracket — performed flawlessly, with no failures of any kind. Gerulski’s fundraising goal was to raise a million dollars for the Pat Tillman Foundation. To date, he is shy of that ambitious goal but continues to push towards it. The Pat Tillman Foundation seeks to carry forward Pat’s legacy by inspiring and supporting young people striving to promote positive change in themselves and the world around them. Inspired by Tillman’s passion, the Foundation’s Leadership Through Action program enhances young people’s leadership skills, helps them use their skills to develop solutions to today’s problems, and ultimately funds those projects that have merit. Further, the program creates a forum and a network for current leaders to give back and help shape the leaders of tomorrow. For detailed information on Dave Gerulski’s incredible journey on behalf of the Pat Tillman Foundation, visit www.34for40.org, and read his ride diary and view photos of the trip. The website also has details on how to donate to the Tillman Foundation. PIAA Corporation, USA is located at 3004 NE 181st, Portland, OR 97230, 503-489-6666. For more information visit the PIAA website at www.piaa.com. And now some reader comment on the above press release, which was posted as received: FIRST PERSON/OPINION Via e-mail: You may have already been advised of the factual error in the article about David Gerulski’s 15051 mile ride. If not, be advised that Pat Tillman was an Army Ranger, not an Army Seal. The only “Seal” units are in the U.S. Navy. I don’t mean to nit pick but when reading Army Seal it is grating to the nerves like someone scraping their finger nails on a chalk board, kind of like reading “Honda Ninja ZX10.” On a positive note, I like your website a lot. I check it every day for the news updates and also subscribe to your magazine. My wife, who rides a 2005 CBR600RR, thumbs through it too. Keep up the good work, Adam Worthington Westerville, Ohio

AHRMA regrets to announce that the uncertainty of government...
Read more
MotoAmerica

Video: Herrin Tests His King Of The Baggers Harley-Davidson

MotoAmerica: Will Fong Continue His Winning Ways At Laguna?