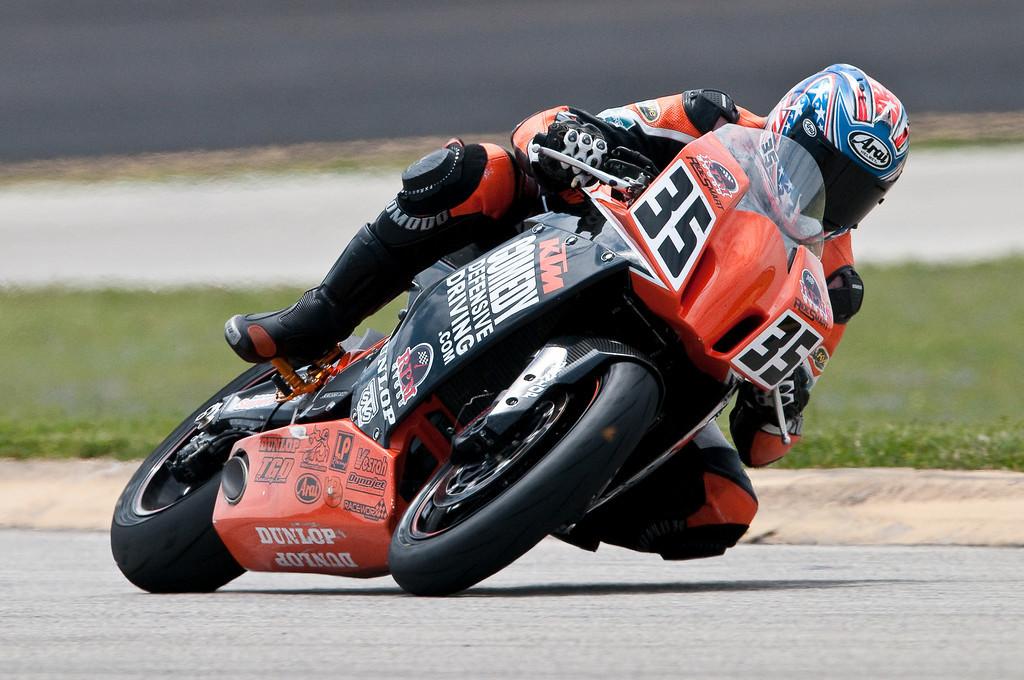 After weather affected the first two rounds of the Central Motorcycle Roadracing Association’s season, leaving track conditions less than optimum, Mother Nature finally smiled on the CMRA’s 2010 schedule and blessed the third round of the race series with near perfect weather at Texas World Speedway in College Station, Texas. The mild weather seemed to draw not only the racers to the track, with a very healthy 575 sprint entries and 35 big bike endurance teams gridding up to go at it, but road racing luminaries, too — Colin Edwards Sr. was spotted watching racing on both Saturday and Sunday.

The weekend’s events kicked off in a big way with the small bikes on Saturday as 29 racers gridded up for the Formula 4/Formula 6 mini sprint race on the 1.8 mile road course, with 19 of those riders hoping to get a share of the newly posted Jon Broom / Zac Chapman Road to Recovery contingency money in Formula 4. When the green flag dropped, a massive battle for the lead ensued between Hunter Morgan on a GP-framed Honda RS80 two-stroke and Austin Gore on a GP-framed Honda RS150 four-stroke. Lap after lap the pair would cross the stripe virtually side by side, but after six laps, it was Morgan who edged out Gore by a scant 0.046 seconds. Jeff Mendelson rounded out the F4 podium. Roger Albert took home the win in the Formula 6 class on his Honda XR100, besting Garet Tomlinson and Jay Newton.

Austin Gore was back on the grid in the Formula 5/Formula 7 mini sprint race on his Aprilia RS150, and again found himself locked in a fight for the lead, only this time with GP-framed Honda RS65 mounted Marcus Beedle. When this one was over, however, it was Gore who would claim the top spot by mere 0.074 seconds over Beedle. Roger Albert rounded out the F5 order on a Honda CRF150. Wyatt Sperry would take the top spot in Formula 7 on his Honda NSF100 over Rob Rundell and Jonas Valentine.

The RentMyNinja.com Superstock E class took to the grid next, and, once again, Austin Gore was on the grid, this time on a Kawasaki EX250 Ninja. After the green flag dropped, Gore battled with initial leader Jess Foltz for the front spot, but Foltz faded and Gore took over the lead, keeping it until the checkered flag. Brandon Altmeyer steadily worked his way up from the middle of the field to capture second place while Joey Howells had a solid ride to claim the third spot.

The 6-hour Big Bike Endurance took to the 2.9 mile course next, and, as in the first two endurance rounds of the season, the Ridesmart/RPM Cycle KTM RC8 of Ty Howard, Ricky Jordan and Bryan West looked unstoppable. The team stretched out a comfortable lead until the second hour when Jordan crashed exiting the horseshoe. The team had to scavenge parts off of Howard’s sprint bike to get the endurance bike back into the fray. Moto Ace (Derek Wagnon, Jeremy Kidd, Joe Prussiano, Dustin Dominguez) took over the race lead, and, over the course of the next few hours, made that lead comfortable. Although there were several crashes throughout the day, no red flags flew, and the 6-hour race ended with Moto Ace’s Suzuki GSX-R1000 taking the overall win, five laps up on the GSX-R1000 of Mini Haters (William Shupak, Marv Esterly, Jack Vigneau, Pete Martins) and 8 laps in front of Village Idiots (John Orchard, Chris Headley, Chad Tieszen, Brandon Cleland), who claimed third overall and first in Superbike C. Ridesmart/RPM Cycle recovered enough from the earlier crash to claim fourth overall and third in the Superbike A class, 10 laps down on the leaders. Other class winners included Double D Express (Daniel Dominguez, Les Banta, Dewayne Davis, Darnell Dorsey) in Classic Endurance on a Kawasaki ZX-7R in seventh overall, and Desert Rats (Stephen Guynes, Jeff Mendelson, Derek Thomas, Keith Hertell, Jess Foltz) in the Sonic Springs-sponsored Formula 2 class on a Suzuki GSX-R600 in 14th overall.

In terms of red flags, Sunday’s sprint races were the opposite of Saturday’s races, and saw multiple race stoppages occurring that delayed the schedule. Riding a Kawasaki ZX-6R and a Suzuki SV650 in eight sprint classes, Dustin Dominguez claimed the most wins on the weekend with six, and collected two runner-up finishes as well. Dominguez scored wins in the LMSTrackdays.com B Superstock Expert, South Central Race Center C Superstock Expert, Lightweight Twins Expert, D Superbike Expert, D Superstock Expert, and Island Racing Services C Superbike Expert races, and finished in the second spot in the EXEL Transportation Formula 2 Expert and the SASuperbike.com B Superbike Expert races behind Conner Blevins, and Derek Wagnon respectively. After being edged at the finish line by .019 seconds by Wagnon in B Superbike, Dominguez said, “I knew Derek was coming. He tried me going into turn one on the next to the last lap, and he went high. I was able to block him and hold him off that lap. I was sure he was going to go in high again on the last lap and I prepared for that, but he surprised me by going in low and getting by me. I tried to make up ground on him but came up a little short.”

Ty Howard rode his mighty KTM RC8 to wins in the RaceworX A Superstock, AVTEQ A Superbike and Formula 1 Expert races, lowering the lap record in the process. The Argyle, Texas resident turned a 1:41:415 in the Formula 1 race while stretching out his lead over Derek Wagnon on a Suzuki GSX-R750, eclipsing the previous lap record held by Dane Westby since late 2008. Howard said, “Derek was riding really good all weekend long, so I knew I had to put my head down and go. The KTM RC8 is such a great bike, so easy to ride. It doesn’t feel fast, but it is. Honestly, that record lap felt like a 1:45.”

One of the most entertaining and competitive races of the day was the Rookie Expert race, where the top three positions were traded over the course of most of the race between Alonzo Contreras, Blake Cochran and Tony Ta. Ta came from the last spot on the grid to lead the race on the first lap, but Contreras and Cochran locked on him and the battle ensued for several laps. Eventually Ta made a mistake, however, and Contreras and Cochran capitalized and took the top two spots, leaving Ta in third.

The CMRA returns to action on April 30 – May 2 for the fourth round of the series at Eagles Canyon Raceway in Decatur, Texas, for a full slate of sprint racing action on that Sunday and a 12 hour mini endurance race (and a Texas Mini Grand Prix crossover event) that is bound to be a wild ride on that Saturday.

More, from a press release issued by North Texas Superbikes:

Texas World Speedway hosted the third round of the Central Motorcycle Road Racing Associations 2010 season this past weekend, with North Texas Superbikes and Dunlop tire supported teams and riders winning the majority of the Novice classes, all of the Expert and Novice 1000cc races, and establishing a new track record.

CMRA Big Bike Endurance Series: Dunlop N-Tec slick equipped KTM/ Ridesmart /RPM Cycle looked poised to win its third endurance round in a row when a crash induced 24 minute pit stop ended the streak. Restarting from over 10 laps down, outside the top 20, fast riding, consistent pit stops, and only 2 tires allowed them to finish 3rd in class and 4th overall. Still retaining the overall points lead. “We had everyone covered this weekend,” said a frustrated Ty Howard. “Our bike was much better than the last race, and the tires were working great. We definitely should have won that race.”

CMRA Sprint races: TWS veteran Ty Howard looked unstoppable in practice and backed up his morning fast times by smashing the lap record set in an epic battle between himself and Dane Westby in October of 2008, with a 1:41:415 in Expert F1 riding on Dunlop N-Tec KR 7704 compound slicks. Howard won Expert F1, A Superbike, and A Superstock all by almost the entire TWS straight. Other Expert highlights included Ted Phillips with the win in Unlimited Motard, Alonzo Contreras winning Rookie Expert, and Carlos Lescale, Billy Gonzales, and Alan Campbell all battling hard for multiple podiums and setting their best lap times at TWS ever.

Dunlop equipped Novice riders filled top spots in every big bike class of the weekend, winning over 50% of the Novice races, with the top 7 riders in B Superstock and C Superstock all on Dunlop D211 N-Tec tires.

North Texas Superbikes team rider and Novice phenom Jeremy Louder continued to impress everyone with wins in F1, A Superbike, and A Superstock on Dunlop D211 N-Tec 7704 rubber. Louder was able to catch and pass deep into the top 10 of the expert field from the second wave in each race. Other notable finishers included Derek Steptoe with wins in B and C Superstock, John Keene with a win in B Superbike, and Andy Burt for his first win ever in C Superbike.

North Texas Superbikes offers the full line of Dunlop Racing tires which will be available at all rounds of the CMRA racing series and TX North Ridesmart Track Days. North Texas Superbikes supports all racing and track day riding in Texas, Oklahoma, and Louisiana and may be contacted at 1-866-536-1279 or northtexassuperbikes.com. Dealer inquiries welcome.

More, from a press release issued by Curt Bennett of MaxGs Racing:

MaxGs Racing sponsored riders Alonzo Contreras and Tony Ta had a great showing at Texas World Speedway in round three of the CMRA championship series. In his first season as an Expert, Alonzo Contreras continues to show remarkable pace with a first place finish in the Rookie Expert race and top 5 finishes in the Superstock B Expert and Superbike C Expert races. Going into the fourth round, Alonzo is 2nd in the points in both the Superstock B Expert and Rookie Expert classes.

Tony Ta, moving from his SV650 to a debut ride on a new Yamaha R6 established himself as a force to be reckoned with in another series of classes. Showing the talent that propelled him to multiple class wins in the 2009 CMRA Championship as a Novice, Tony finished on the podium in the Rookie Expert class, a 6th in Superbike C, and top 10 finishes in the Superstock B, Superstock C, and Formula 1 classes.

MaxGs Racing was pleased to provide data acquisition and track side services to a newcomer to the CMRA series, Dean Dufrene for round 3. Riding a GSXR-600, Dean showed tremendous improvement, bettering his fast lap times by almost ten seconds riding to a Top 5 finish in Superstock A Novice and Novice Formula 1 Novice.