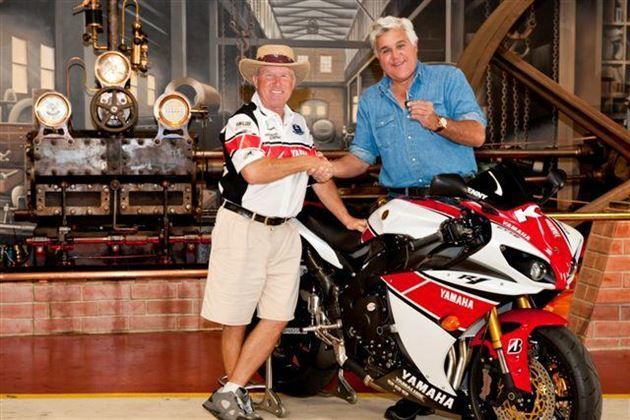 The elder Roberts suffered a heart attack August 14th while traveling and had surgery in Eugene, Oregon on August 15th, with doctors installing a stent to open a partially blocked artery. Now, two weeks after the surgery, Roberts is scheduled to face off against son Kurtis in a California courtroom in a domestic violence case today, August 29th.

In a court filing on August 5 in The Superior Court of California, County of Stanislaus, Kenny Roberts (identified in court documents at Roberts Sr.) alleged that Kurtis Roberts “has harassed and threatened me numerous times over the past year. The conduct continued to escalate until the harassment became physical. In or about the week of June 20, 2016, the last time I entered my property, … (Kurtis) assaulted me, choked me and threatened my life.”

In a telephone interview after he contacted  Roadracing World to talk about the case, Kurtis Roberts said that it was his father who struck him and that he warned his father to stop assaulting him during an incident in May at his father’s ranch. At the time, Kurtis Roberts was living at the ranch with his wife and young children, in a building separate from the main residence, and was involved with his father in an almond orchard project on the property, he said.

Kurtis Roberts disputed statements in the court filing, saying that he was not physically near Roberts Sr. in June. “I haven’t seen my father since May,” Kurtis Roberts said. “That was when he told me that I was no longer partner in the orchard thing that I had been working for and doing everything with and learning everything about–because he needed $200,000 a year to live. And so tough s—. We got into an argument. He threatened to kick my ass. He then pushed me with his chest and hit me in the chest. And I grabbed him and said, ‘Dude, I’m bigger than you. You don’t want to do this. If you start this, I’m going to end it. And I’m going to end it badly because of all of the s— you’ve done to me my whole life. Knock this s— off.”

The court issued a temporary restraining order (TRO) in the case, according to Stephanie Mitchell, Courtroom Services Manager for the Stanislaus court. The TRO sought by Roberts Sr. asked the court to order Kurtis Roberts to vacate the property and to stay 100 yards away from Roberts Sr., his home, his vehicle and his workplace. The next hearing on the case was set for today, August 29, according to court records.

Kurtis Roberts said that earlier this year, he called local agricultural officials to report the illegal spraying of pesticides by contractors on the Roberts property, within 20 feet of where his children lived. That incident apparently sparked a confrontation between Kurtis Roberts and Kenny Roberts Sr.

Kurtis Roberts told Roadracing World that he, his wife and two children no longer live at the ranch and have had no further contact with Roberts Sr. Kurtis Roberts said that the business disputes between him and his father go back for years, and that he is still waiting for back pay from his father.

“I have no relationship with my father,” Kurtis Roberts says. “On June 22, he actually texted my wife back, since my wife had invited him to his newborn grandson’s baptism. And he replied that ‘Since my son is going to sue me, I don’t think that it’s a good thing that we see each other or are near each other.’ When he told me (in May) that I was no longer a partner (in the almond project), that’s when I said, ‘Fine, I’ll sue you,’ and that’s when he threatened to kick my ass.” Kurtis Roberts added that he has not filed suit against his father.

In a phone call to Roadracing World last Friday night,  Kenny Roberts Jr. (the 2000 500cc Grand Prix World Champion) declined to comment in detail on the record, but broadly defended his father and blamed the dispute on his brother Kurtis. Kenny Roberts Jr. said that his father had gone out of his way to help Kurtis resolve financial problems, including allowing him to live rent free at the ranch prior to the dispute; Roberts Jr. said that Roberts Sr. declined to file felony charges following the dispute, because “he didn’t want to ruin Kurtis’ life,” and that Roberts Sr. was resting and unable to come to the phone, but might be available today.

It is with heavy hearts that we can now...
Read more
Feature