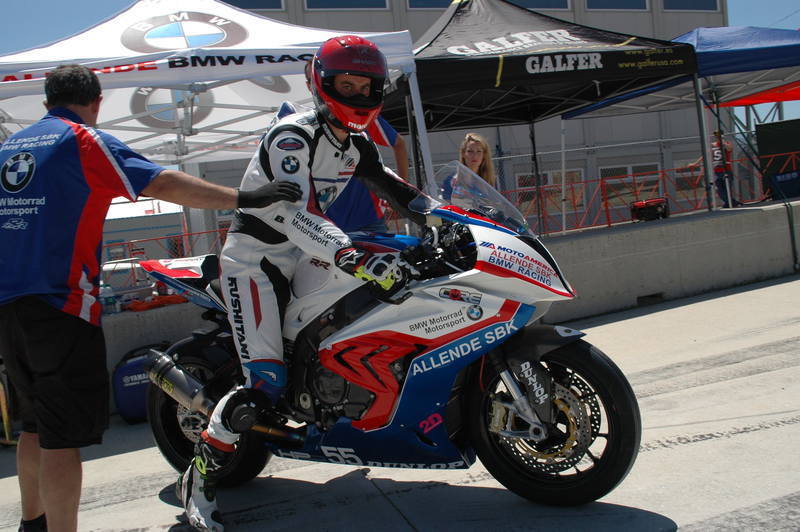 According to witnesses, Daniel Rivas had just launched his BMW S1000RR from row three of the grid when his bike lost power and slowed suddenly. Rivas put his left hand up to alert other riders, according to racer Mark Heckles.

Some riders were able to narrowly miss Rivas, but at some point Rivas was knocked off or fell from his motorcycle. Then while he was on the ground, Rivas was struck by at least one rider. Cory Call told Roadracingworld.com that he could not avoid running over Rivas.

Martinez and Rivas were transported to local hospitals, but sadly, both riders succumbed to their injuries, according to MotoAmerica.

The conditions of the three other riders involved in the incident were not immediately available, but they are not believed to be seriously injured, according to MotoAmerica Director of Communications Paul Carruthers.

Martinez, a 35-year-old privateer from Alberic, Valencia, Spain, raced a Blumaq-sponsored Yamaha YZF-R1 regularly in the MotoAmerica Superbike Championship and was fifth in the Championship standings coming into the weekend. Martinez qualified 15th for the combined Superbike/Superstock 1000 races at Mazda Raceway Laguna Seca.

Rivas, a 27-year-old from Moana Galicia, Spain, was racing with MotoAmerica for the first time and with Allende SBK BMW Racing for the first time. He qualified eighth for the combined Superbike/Superstock 1000 races at Mazda Raceway Laguna Seca. He finished sixth in the 2014 CEV Repsol Superbike Championship and won the European Supersport Championship in 2009, he told Roadracingworld.com on July 17.

MONTEREY, CA, JULY 19 – A chain-reaction, multi-bike incident on the first lap of today’s second MotoAmerica Superbike/Superstock 1000 race at Mazda Raceway Laguna Seca has resulted in the deaths of two competitors.

Bernat Martinez, of Alberic, Valencia, Spain, was transported from the raceway by ambulance to Community Hospital of the Monterey Peninsula (CHOMP) in Monterey, where he succumbed to his injuries. He was 35.

Daniel Rivas Fernandez, of Moana Galicia, Spain, was transported by REACH Medical Air Services to Natividad Medical Center in Salinas, where he also succumbed to injuries. He was 27.

“I really don’t have any words to describe what we all feel,” said MotoAmerica president Wayne Rainey. “First and foremost, is the loss to the families and loved ones. Our sincere condolences goes out to each and every one of them as well as the MotoAmerica family. They are in our thoughts and prayers.”

“We are deeply saddened to learn the news of the passing of Bernat Martinez and Daniel Rivas,” said Gill Campbell, CEO and general manager of Mazda Raceway Laguna Seca. “Our prayers and hearts go out to their families and teams.”