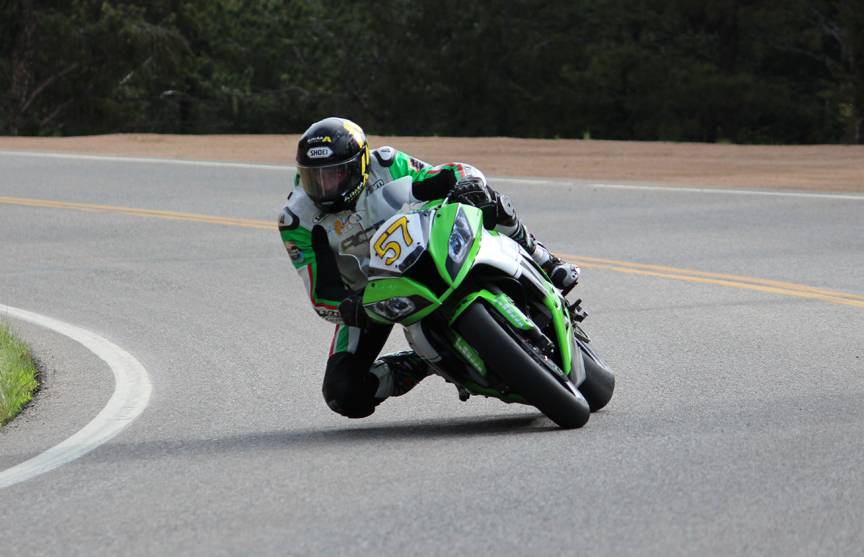 COLORADO SPRINGS, Colo., – The championship trophy for The Broadmoor Pikes Peak International Hill Climb will remain in the hands for a French driver for another year.

Romain Dumas of Ales, France, followed in his countryman Sebastien Loeb’s tire tracks by winning the 92nd running of the “Race to the Clouds” after finishing with a time of 9 minutes, 5.801 seconds. That left him nearly three seconds clear of Greg Tracy of Long Beach, Calif., who finished in 9:08.188.

Dumas, who now lives in Geneva, Switzerland, averaged 79.150 miles per hour in his 2013 Norma M20 RD Limited to win the Unlimited Division and overall race title. His time was well off Loeb’s race record of 8:13.878 from last year, but Dumas was thrilled to add his name to the race’s prestigious list of champions.

“After 2012, the target was to win one,” said Dumas, the race runner-up in 2012. “This year, we did a perfect job, the car was running good and we prepared how we should. We are very happy, and this is a big win for the team.

“I knew I was running smoothly, so I didn’t want to take any risks. It was a clear run. It was not incredible, but it was enough to win and that was the target anyway.”

Tracy became the first man in PPIHC history to finish under the 10-minute mark on a motorcycle and in a car while winning the Electric Modified Division in his 2014 Mitsubishi MIEV Evolution III. The time was a division record for Tracy, who celebrated with teammates after returning from the mountain’s 14,115-foot summit.

“It feels incredible,” said Tracy, a six-time PPIHC motorcycle champion. “I came here to win the Electric Class, to break the 10-minute mark, to get the Electric Class record and the Electric qualifying record. I did all that, and to get up there and see that I’m three second off Dumas, I was like, ‘Ahh, I should have had the King of the Hill on this one.

“But that’s one of those moments you’ve got to pull back and say you’re so grateful, thankful and blessed that I’m here with such a great team and on this beautiful mountain among friends. It doesn’t get any better.”

Two race favorites – Paul Dallenbach and Nobuhiro Tajima – had trouble on Sunday. Dallenbach, a three-time PPIHC overall champion, had mechanical issues with his 2008 PVA 3 midway through his run, while nine-time overall winner Tajima had transponder issues and did not have a final time listed at the conclusion of the race.

Hiroshi Masuoka of Saitama, Japan, also drove the same car as Tracy in the Electric Modified Division and finished third overall in 9:12.204. Clint Vasholtz of Woodland Park, Colo., set a division record in winning the Open Wheel Division in 9:54.700.

Vasholtz, who also set the race record in the Super Stock Car Division in 2011, now has 18 career PPIHC titles. Michael Skeen was fifth overall in 9:55.471 while winning the Pikes Peak Open Division with his 2009 Nissan GT-R in his first year racing in the PPIHC.

San Diego’s Jeremy Toye was the fastest racer on two wheels, taking the Pikes Peak Open Division in 9:58.687 on his 2013 Kawasaki ZX-10R motorcycle. He was the lone motorcycle racer to finish in less than 10 minutes and did so in his first year competing in the PPIHC.

Race action was halted for more than 90 minutes early in the morning when 54-year-old motorcycle racer Bobby Goodin crashed just moments after crossing the finish line. Flight For Life airlifted the Flower Mound, Texas, racer to Penrose Main Hospital, but he passed away as a result of his injuries, according to the El Paso Sheriff’s Department.

Medical personnel reportedly performed CPR on Goodin, who lost control of his 2014 Triumph Daytona 675R while attempting to stop and fell headfirst into rocks bordering the peak’s gravel road. Goodin’s death was the first for a motorcycle racer in the PPIHC since 1982 and the fifth race-related death in the race’s 92-year history.

Electric Production driver Steve Wickham wrecked early in his run and was taken off the mountain by ambulance, and his status was also unknown at race conclusion.

Temperatures reached 93 degrees in Colorado Springs on Sunday, a great contrast from the race’s 2013 conditions. The sunny and warm weather, coupled with breezy wind gusts, created slick track conditions that made drivers adjust their strategy for the 12.42-mile race.

“It was pretty slick, and the course always changes,” Tracy said. “It seems like on race day, the course ends up being slick. I don’t know if it’s because you’re pushing it harder or what, but the car worked fabulous.”

A total of 130 racers competed in this year’s race, navigating the course’s 156 turns as quickly as they could in an attempt to reach the summit of “America’s Mountain.”

More, from a press release issued by Metzeler:

Making its debut in this famous hillclimb that has run for many years in Colorado, the brand of German origins immediately gets success in the category dedicated to prototypes which fits the Martek Turbo Custom of the British rider with RACETEC™ RR prototype tires

Colorado Springs, June 30, 2014 – The brand METZELER and Guy Martin won the prestigious Pikes Peak International Hill Climb in the UTV/Exhibition division. Both the brand of German origins and the well-known road racer were making their debut in this competition after two years of constant and fruitful cooperation in competitive road racing.

Guy Martin, who is not only a rider but also a truck mechanic and a skilled preparer of the machine with which he runs, participated in this competition with a machine built with his own hands A Martek Custom Turbo, that is a 1991 Suzuki GSX-R 1100 of 1380 cc reassembled using racing suspension and brakes, a Martek chassis and swingarm, electronic fuel injection and a turbocharger that brings the total horsepower up to 550. This special was finally fitted with METZELER development RACETEC ™ RR tires designed by the brand of German origins for road racing activities and already successful in Isle of Man TT and North West 200 competition.

Thus assembled, the machine has proved successful and has enabled the British rider to win “The race to the Clouds” as it is called. This fascinating competition which takes place annually on Pikes Peak, a mountain 4301 meters high and located 16 kilometers at the west of Colorado Springs, at the eastern end of the Rocky Mountains. The starting point is in fact situated at an altitude of 2862 meters and the race route is almost 20km long with an altitude difference of 1439 meters, an average gradient of 7% and even up to 10.5% before the finish line located at an altitude of 4300 meters.

Until 2012, the route of this race was unique because the road was partly paved and partly gravel but in the last three editions all the nearly 20-kilometer race have been completely paved. But the charm of this unique competition, that takes place on a mountain road with no guardrails or other protection along most of the route, and where the weather and temperatures can change abruptly because of the high altitude difference, remains unchanged. The altitude also affects the efficiency of the engines because the closer you are to the top, oxygen and atmospheric pressure decrease.

On the road since 1892, METZELER has more than 100 years of experience meeting motorcyclists’ toughest tire demands with unflagging innovation. Whether one is drawn to the longevity of its classic design or uncompromising performances, METZELER is an iconic brand to motorcycling worldwide. Established in Munich, METZELER offices are spread globally with production in Germany and South America. METZELER is the “Two Wheels Specialist,” appreciated by motorcyclists for its quality and technology.

For more information on METZELER and its line of motorcycle tires, please visit: www.metzelermoto.com

More, from a press release issued by Kawasaki:

On his first attempt at the Broadmoor Pikes Peak International Hill Climb, road racer Jeremy Toye set a record in the premiere Open Class to win the category aboard a 2015 Kawasaki ZX-10R, celebrating the 30th year of the legendary Ninja brand.

Prior to setting foot on the hill, Toye was confident he could get among the class leaders, aiming to beat the outright Pikes Peak motorcycle record, which was set by Carlin Dunne in 2012 with a time of 9:52.819.

While that record remains intact, Toye was able to set a time of 9:58.687 to win the Open Class, finishing 6sec ahead of his closest rival, Fabrice Lambert aboard a Ducati.

Despite a small spill during qualifying, Toye was always among the fastest riders in practice and qualifying for the 92nd running of the Pikes Peak Hill Climb. In fact, his performance during the event won him the coveted Rookie Of The Year and King Of The Mountain awards. He is also only the third motorcycle rider in history to finish the race in less than ten minutes.

“Our team worked hard to get the bike ready after our get-off in qualifying, but the Ninja ZX-10R ran great,” commented Toye. “Race day conditions were extremely slippery, but we had the setup and big horsepower to get the win.”

With the Pike Peak course now being fully paved, riders have been assessing what would be the best motorcycle to tackle the daunting 156 high speed and hairpin turns while making the 5,000ft ascent to the mountain’s 14,110ft peak. In the past, the mixed road surface called for adventure-style motorcycles, but the paved surface is now suitable for sport bikes and slick tires. As a result, Toye chose the 30th Anniversary Edition of the renowned Kawasaki Ninja ZX-10R fitted with Pirelli Diablo Superbike slick rear and intermediate front tires.

Jeremy is no stranger to challenging races. In fact, his storied career has seen him set the fastest lap for a newcomer at the Isle of Man TT in 2006, a third place at the Macau GP, and multiple top-five finishes in AMA Pro Racing competition. So while Pikes Peak might be daunting for most riders, Toye saw it as another course to conquer and set about preparing the ZX-10R to get the job done.

Of course, Jeremy didn’t have it all his own way. He was up against some very tough and experienced international competition. Fellow Kawasaki rider, Daniel Fernandez from Colombia finished in sixth place aboard a Kawasaki Versys 1000, setting a time of 10:37.043.

British rider and Isle of Man TT legend, Guy Martin, also made his rookie appearance at Pikes Peak. He was riding a 2014 Martek with a turbocharged 1100cc engine but mechanical issues would put him down in 11th place with a time of 11:32.6.