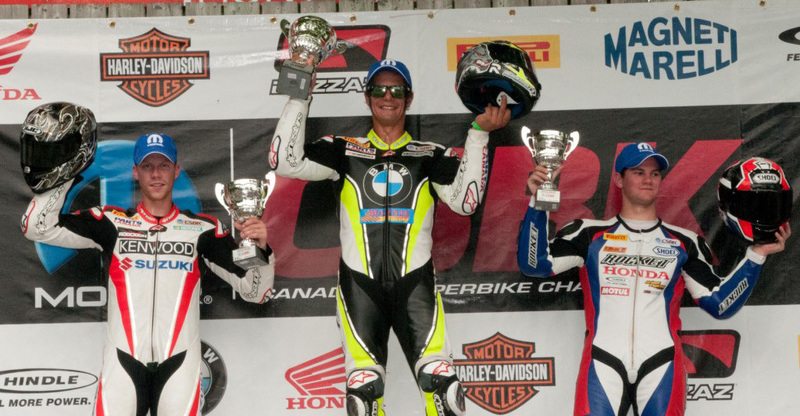 The Brantford, Ont. racer took the lead on the opening lap and led the rest of the way on his Waznie Racing / BMW Motorrad Canada / Parts Canada BMW S1000RR. He finished the 16-lap race 6.183 secs. clear of Alex Welsh on the AW7R / Kenwood Electronics Canada / Parts Canada Suzuki GSX-R1000.

The title was Szoke’s second in a row and his ninth Canadian national Superbike crown. He finished the season with 307 points to the 252 of Welsh and Christie’s 208.

“To win one of these championships means so much to a rider,” said the 34-year-old Szoke. “I never imagined I would be able to win nine. I hope it never stops. These guys [Welsh and Christie] gave me a good fight this year. They keep getting better and better and I keep getting older.”

Szoke had claimed pole position for Sunday’s race in Magneti Marelli SuperPole qualifying on Saturday but Bodhi Edie of Warman, Sask. swept into the lead from his position on the outside of the front row off the start. Welsh then grabbed the lead halfway around the opening lap but Szoke dove down the inside of the Suzuki rider entering the Namerow Hairpin to lead at the end of the opening lap.

The BMW rider stretched his advantage from there, leading by three seconds after six laps and by almost six seconds after 12 laps. He turned the fastest lap of the race, a 1:39.711 on his fifth tour.

“I thought I had got a great start but Alex really got the jump on me,” Szoke admitted after his fifth Superbike national win at Le Circuit. “We had an amazing set-up this weekend and I just felt like we had the jump on everybody.”

Welsh came into the weekend as the only rider with a shot at taking the Mopar Canadian Superbike Championship title from Szoke. But the Uxbridge, Ont. racer suffered a fall in practice on Friday and could only qualify fifth fastest on Saturday.

“We were just a little bit behind all weekend,” said Welsh, who finished on the podium in every Mopar Canadian Superbike Championship event this year. “My team gave me the best bike of the weekend today but it was a lot of work out there. Jordan was tough as always.”

Christie ran third all the way. He was challenged by the Edie Racing / Charles Antle / Ffun Motorsports BMW S1000RR of Edie until the Saskatchewan racer fell unhurt in turn eight on lap seven. Christie then survived a late push from Frank Trombino to claim his second straight third place finish at Le Circuit.

Kleinburg, Ont.’s Trombino settled for fourth aboard the Trombino Racing / Royal Plumbing / FDS Racing Aprilia RSV4 Factory despite pressure throughout the race from the OneSpeed Suzuki GSX-R1000 of Mississauga, Ont.’s Trevor Daley. Daley picked up the $500 Sunoco / Brooklin Cycle Racing Rookie of the Race Award for his fifth place finish.

Sebastien Tremblay of Longueuil, Que. took sixth on the MotoNation / ASM Motorsport BMW S1000RR, just ahead of the Robinson Racing / Gym-Max / Monette Sports BMW S1000RR of Tim Robinson. The Gatineau, Que. rider charged up from 11th early in the race to threaten Tremblay over the final four laps.

Toronto’s Michael Taylor took his second win of the year for the Mackie Harley-Davidson team, just holding off a late charge by Ruthless Racing’s Darren James of North Vancouver, but still finished 16 points behind Crevier in the standings.

Mitch Card claimed both Amateur national titles at Le Circuit on Sunday. In the Magneti Marelli Amateur Superbike class, the Ripley, Ont. rider finished third in the final round on his ProStar Motorsports / Blue Streak Racing Honda CBR1000RR to win the title by 21 points over Orangeville, Ont.’s Steve Hoffarth, who placed second in the finale aboard the Serpa BMW / Inside Motorcycles BMW S1000RR.

Both Amateur Superbike races on Sunday were won by Stephan Houle of Gatineau, Que. on the 613 Motorsports / Wheelsport / Jim Keay Ford Kawasaki ZX-10R.

Marco Sousa claimed his first career national win in the final round of the Bazzaz / Inside Motorcycles Amateur Sport Bike Championship, but with a second place finish Card clinched that title as well.

Riding a Suzuki GSX-R600, Schomberg, Ont.’s Sousa beat the Honda CBR600RR of Card by 2.944 secs., leaving the pair tied on points at 256 apiece. Card took the title thanks to his three race wins this season compared to one for Sousa.

Tomas Casas completed a sweep of the Honda CBR250R National Race Series at Le Circuit. The Peterborough, Ont. rider, who had already clinched the crown, rode his Peterborough Cycle Salvage-backed bike to an 18.113-sec. victory over Oakville, Ont.’s Cameron Walker.

Video coverage of the Mopar Pro Superbike, Harley-Davidson Canada XR1200 Cup and Saturday’s Honda CBR250R National will be available on www.csbk.ca, as well as highlights from the Hindle Exhaust Pro Sport Bike race.

In his first visit to the historic racetrack, Sam...
Read more
Load more