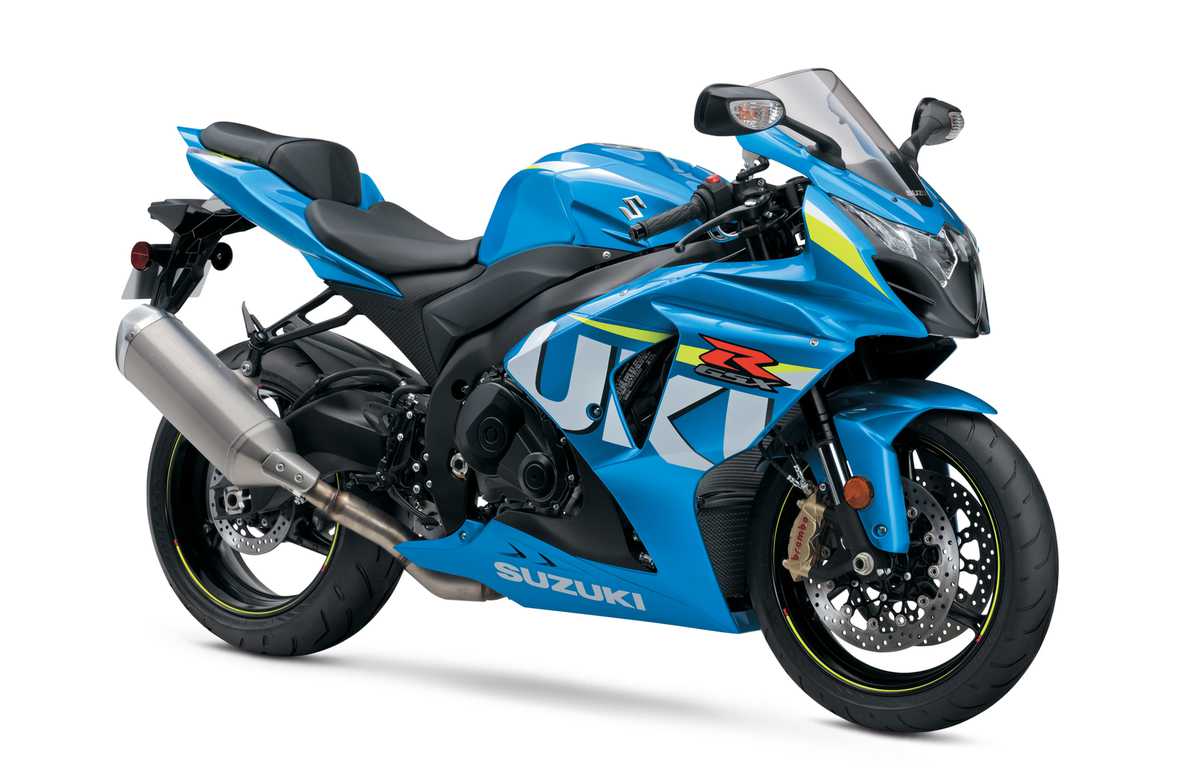 The bike that created the most devoted following in the world, the 2015 Suzuki Hayabusa still delivers unsurpassed performance at any speed, setting the bar high for rivals and defining the “Ultimate Sport Bike.” The radically original styling also reflects the spirit of the person who owns a Hayabusa. Sensational power, speed, smooth ride and overwhelming presence continue to fascinate owners and onlookers alike.

Standard on the Hayabusa is an Anti-lock Brake System* that enhances brake performance. The system monitors wheel speeds to match stopping power to available traction helping prevent wheels from locking up due to hard braking or to changes in road conditions. Front brakes feature Brembo radial-mount monoblock calipers that deliver exceptional controllability with immense stopping power.

The more you look at the 2015 Suzuki GSX-R1000, the more you realize that beauty has many forms. Bred from technologies conceived, refined, and track tested in the development of MotoGP machines like the GSX-RR, the GSX-R1000 proves that beauty is much more than skin deep.

A powerful and popular competitor in AMA Superbike competition, the GSX-R1000 has a laser-focused commitment to Own The Racetrack. Commemorating Suzuki’s 2015 return to MotoGP racing, the new GSX-R1000 is dressed in Metallic Triton Blue to express the Suzuki spirit and passion for racing.

The 2015 Suzuki GSX-R1000 is available in two color styles: Pearl Mira Red / Metallic Matte Black; and Metallic Triton Blue, both at a suggested retail price of $13,899.

Suzuki has remained true to the GSX-R’s original concept with continued evolution the Suzuki GSX-R750, and 2015 is no exception. The GSX-R750 remains the top choice for those who appreciate a state-of-the-art 750cc engine combined with the compactness of a GSX-R600 sportbike. The experience on the GSX-R750 is a incredible combination of outstanding race winning heritage, engine performance, crisp handling, compact size and light weight.

The 2015 AMA SuperSport champion in the AMA Pro Road Racing series delivers a dominating performance on the street. The 2015 Suzuki GSX-R600 features an advanced, race-proven 599cc, 4-cylinder, and liquid-cooled engine; a responsive, agile, and lightweight chassis; compact wheelbase; and race-developed suspension. In short, the GSX-R600 has once again proven to be the winning combination to Own the Racetrack.

The 2015 Suzuki GSX-R600 is available in two color styles: Pearl Bracing White / Metallic Matte Fibroin Gray; and Metallic Triton Blue, both at a suggested retail price of $11,199. (Reduced by $500)