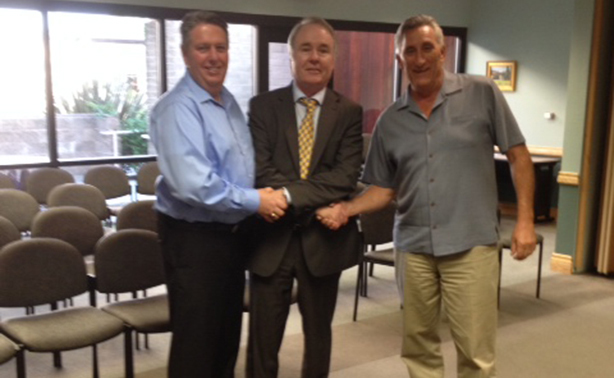 Chris Agajanian to serve as acting director for the Sacramento Mile

SACRAMENTO, Calif. (July 16, 2014) – Steve McLaughlin, on the verge of promoting his first AMA Pro Grand National at the Sacramento Mile through his company SMI, suffered a heart attack at his home in Germany and is scheduled for open-heart surgery on Thursday, July 17. As a result McLaughlin will not be able to attend this year’s Sacramento Mile, on July 26. McLaughlin has asked well-known former race promoter Chris Agajanian to fill in as acting director of the event.

“It’s something you never expect to happen,” McLaughlin said from his hospital room in Germany. “I was looking forward to coming to California this week and overseeing the race, but my doctors tell me I won’t be up to traveling for a month or so after this surgery. I’m going to miss getting to see all the SMI staff, the Cal Expo staff I’ve worked so closely with and of course the fans and riders who are going to make this year’s Sacramento Mile a huge success.

“I’m grateful to Chris for stepping up to come in at the last minute and serving as director of the event. He is the first one I thought of when I realized I wouldn’t be able to fulfill my duties in person, but I wasn’t sure he’d agree to it or not. I was relieved when he told me he’d be happy to help.”

Agajanian is a veteran racing promoter who grew up learning race promotions under his legendary father, Motorcycle Hall of Famer J.C. Agajanian. After college Chris began a successful career in the music industry working for Warner Bros. Records, but it wasn’t long before his family’s business came calling. In the early 1970s his father asked Chris to come to work for him full time and he became General Manager and Vice President of Agajanian Enterprises while taking on the duties of owner/operator at the legendary Ascot Raceway in Gardena, CA.

Agajanian worked his way up through the family business and went on to head the company for years, successfully promoting AMA Grand National races such as the Sacramento Mile, the Dallas Mile, the Seattle Mile and the Del Mar Mile as well as other venues such as Knoxville, Iowa, Denver and Las Vegas. For his outstanding work Agajanian received the prestigious Promoter of the Year Award from the American Motorcycle Association. His company was bought out by Clear Channel in 2000. He served as the President of that company’s Dirt Track Division for five years.

“I thought I’d escaped this madness,” Agajanian joked when he was asked by McLaughlin to direct the event. “But in all seriousness, I’m happy to come in and help Steve. He’s been a friend for years and that’s what we do in the motorcycle racing fraternity – we come together and make things work when a colleague has a time of need. Steve has assembled a great team to promote this event. I’ve worked with many of the staff before and it looks like things are going to be pretty seamless. I think Steve just wanted someone there who’d been through it all before and could answer questions should they come up and I’m happy to do whatever I can to help this be a successful event. We all wish Steve a speedy recovery.”

Practice for the Sacramento Mile begins at on Saturday, July 26 at 2:15 p.m. and opening ceremonies for the evening program kicks off at 6:15 p.m.

2014 Ticket Information: Ticket information is available for the July 26, 2014 Sacramento Mile at www.sactomile.com.

Tickets for groups of 20 or more also are available. Contact the Cal Expo Group Sales Department at [email protected] for more information.