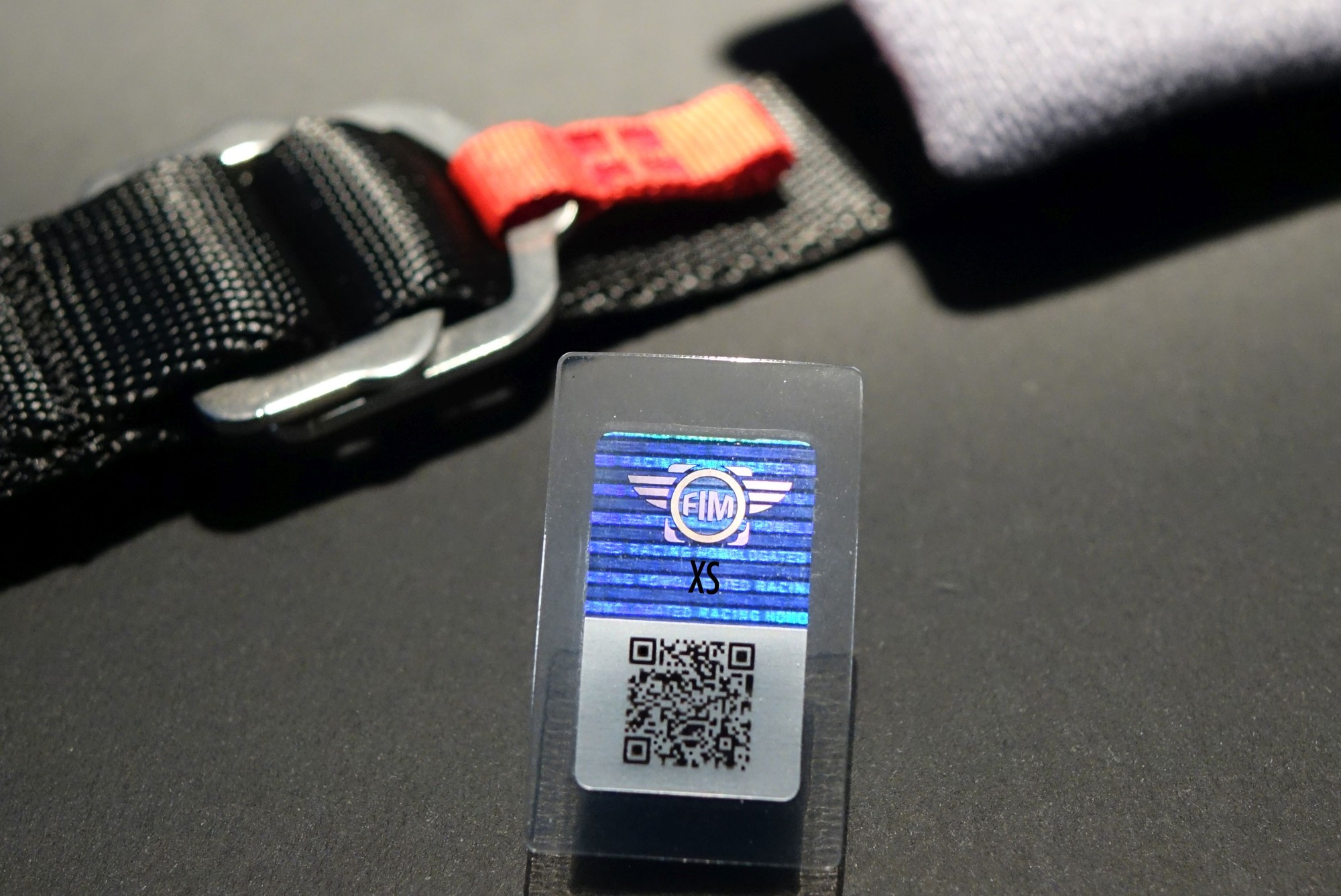 President, Board of Directors

This letter is written with regard to the FIM Racing Homologations Programs for helmets used in FIM events. We are grateful that Snell Certification is accepted as one of the several alternative prerequisite requirements for helmet models submitted for FIM homologation. Even so, the FRHPhe#O1 performance tests and test criteria combine to block most if not all current Snell M2015 certified helmets from the FIM program. Meeting both the Snell M2015 and the FRHPhe#O1 impact requirements would necessitate substantially larger, heavier helmets but Snell M2015 already calls for as much helmet as riders might reasonably be expected to wear. The industry can reasonably meet either standard but not both. We are working to resolve this problem with FRHPhe#OI but ifFRHPhe#02 is put into effect, there may be no good solution.

The next revision of the Snell standard for motorcycle helmets has been drafted to ameliorate the incompatibility with FRHPhe#O1. It presents two options to the industry, one of which, M2020R, has been formulated to assure compliance with the FRHPhe#O1 flat impact tests as well as with those of ECE R22-05. The FIM FRHP#O1 impact test specifications and HIC criterion demanded a rough 13% reduction in shock transmission from M2015 to M2020R. Keeping helmet weight and bulk within reasonable bounds required a corresponding rollback of impact energy management. Reasonably, this lessening of impact energy management implies increased injury risk for riders who currently wear Snell certified helmets; and as yet there is little assurance that reduction in shock transmission will lead to any compensating reduction in injury risk in lower severity incidents. Equally uncertain is whether the FRHPhe#O1 oblique impact innovations will reduce injury risk. But M2020R is compatible with ECE R22-05 and still demands much more impact energy management than that standard. The increased injury risk implied in the shift from M20 15 to M2020R could be amply compensated by the prospect of reduced injury risks for those riders obligated to wear ECE R22-05 compliant helmets.

The arguments reduce to these: FRHPhe#O1 calls for a rollback of Snell’ s current impact energy demands but only to levels still substantially greater than those demanded by ECE R22-0S. Reasonably then, M2020R by complying with FRHPhe#O1 and ECE R22-0S might promote a net reduction in motorcycle head injury world wide. But FHRPhe#02 would rollback M2015 impact energy management even further; the change would take us all the way back to Snell’ s 1970 standard. And FRHPhe#02 would offer no compensating access to broader populations of riders. And there has been no persuasive demonstration that the reductions in shock transmission imposed by FRHPhe#O1 and #02 or their innovative oblique impact demands will, of themselves, lead to reductions in crash injury risk.

Therefore, while simple arithmetic might favor M2020R and its potential for compliance with FRHPhe#O1 , there is no reasonable argument for Snell to seek compliance with FRHPhe#02. For these reasons, we must not roll back our demands for energy management far enough for FRHPhe#02 compliance nor accept the injury consequences for the riders Snell certification currently serves.

This is our dilemma: Snell seeks standards which will identify the most protective helmets motorcyclists might reasonably be expected to wear. But Snell standards are constrained by mandatory requirements set by governments and sporting authorities. If we do not accept a particular constraint, we cannot serve riders in areas where the constraint applies. If we do accept, we risk diluting the value of our service everywhere in order to serve a specific locality. We believe that the FIM helmet program will be a powerful influence on rider preferences but we are also concerned that FRHPhe#02 will call for substantially lower levels of impact energy management with no compensating reduction in injury incidence in less severe impacts.

For the reasons stated above, Snell cannot recommend FHRPhe#02 for racing or street motorcycle use. We urge that FRHPhe#02 be delayed until documented experience or scientific findings establish that lower energy management will not increase the danger of serious head injury.

President, Snell Foundation Board of Directors

To: Snell Board and Staff

FIM helmet requirements are incomplete in themselves. To assure that helmets meet certain critical aspects of performance not directly addressed in their standards, FIM instead requires that helmets also be homologated to one of three different specifications: Snell, JIS T8133:201S or ECE R22-0S. One aspect of FIM incompleteness is that FIM does not specify impact testing against load concentrating surfaces. These tests set required levels of impact energy management. Although such testing is prescribed in each of the three prerequisite specifications, the tests differ considerably. Therefore, the impact energy management capability of any particular FIM homologated helmet is likely to depend on which of the three prerequisites applies.

FIM helmet requirements do specify impact tests against flat surfaces. Here the critical performance issue is impact attenuation rather than impact energy management. That is: any failures are likely to be due to excessive liner crush resistance instead of liner collapse. However, FIM impact attenuation requirements are more stringent than any of the three prerequisites. For FIM’s first phase, FRHPhe#O1, the difference is slight for ECE R22-05, only about 2% but is substantial for the other two; about 13% for Snell M2015 and may be as much as 20% for JIS T8133:2015. However for the second phase, FRHPhe#02, the differences are substantial for all three: about 9% for ECE R22-05, 27% for Snell M2015 and as much as 33% for JIS T8133:2015.

These more stringent FIM flat impact demands effectively set lower limits on the thickness of impact liner material necessary to manage a given level of impact energy. Adding FIM requirements to those of any of the prerequisite specifications must therefore demand larger, heavier helmets. However, M2015 helmets are already as large and heavy as motorcyclists might reasonably be expected to wear. Increasing M2015 helmet weight and bulk is therefore not an option. The only conceivable solution is to roll back Snell demands for impact energy management.

Snell M2020R includes such a rollback. Its flat impact test velocities and criteria match those of FRHPhe#O1 and its impact energy management demands have been chosen to demand helmets of comparable weight and silhouette to those currently meeting M2015. As a result, M2020R will also meet ECE R22-05 impact attenuation requirements while still demanding considerably more impact energy management.

Justifying the changes in M2020R requires a brutal arithmetic. Since the impact attenuation demands of M2015 have seemed well within human tolerance, the reduction in M2020R impact attenuation seems unlikely to have any real benefit. Furthermore, the M2020R reduction in impact energy management suggests a slight increase in injury risk for riders who currently have access to Snell certified helmets. However, this slight increase may be more than offset by the potential reductions in risk for riders in regions where ECE R22-05 headgear are required and who may now have access to ECE homologated M2020R helmets.

A comparable rollback from M2015 to accommodate FRHPhe#02 would oblige a much greater reduction in impact energy management and, potentially, an even greater increase in the risk of injury for riders currently wearing Snell certified helmets. Furthermore, this rollback would not improve on M2020R compatibility with 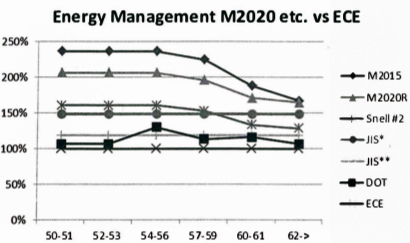 ECE R22-05. There would be little or no offsetting risk reductions for the increases implied by the energy
management roll back.

The chart shows estimated energy management demands as a percentage of the nominal ECE requirement. By this analysis, M2015 demands the most energy management of the standards being considered. The lower percentages for the larger head forms are due to more stringent impact criteria coupled with practical realities regarding materials and human factors. The M2015 requirements are thought here to represent the most protective helmet a motorcyclist might reasonably be expected to wear. The M2020R estimates represent the accommodations considered necessary for compliance with FRHPhe#O1. The Snell#2 estimates anticipate the
roll back in energy management necessary for compliance with FRHPhe#2. The JIS* estimates are based on the guided fall test option permitted in JIS T8133:2015. They are uniformly about 50% greater than the nominal ECE demand. JIS** estimates are based on tests to the JIS T8133:2015 free fall option. They are uniformly about 18%
greater than the nominal ECE demand.

DOT (FMVSS 218) is not one of the accepted prerequisites for FIM homologation but it compares favorably with ECE R22-05 in terms of impact protection. Energy management comparisons are complicated by the differences in test head forms. DOT calls out three head forms instead of five or six to cover about the same size range.

Although the ECE energy management estimates indicated in the chart are lower than any of the other
standards represented, actual performance may be lower still. ECE 22-05 confines impact tests to five limited
specific test sites on the helmet shell. Side by side testing shows that at least a few helmet makers game ECE
requirements and skimp on performance between these test sites. Performance against the kerbstone is likely
to be much poorer between the specified test sites although flat impacts may appear to do well because of the
greater distribution of the loading.

It is worth noting that FIA 8860 which sets requirements used in Formula 1 competition as well as other auto
racing events demands about 20% more energy management even than Snell M2015. However, this
performance requirement is based on an expensive carbon fiber shell technology. Helmets meeting this energy
management demand are priced well beyond the means of most motorcylists.

Although FIM flat impact requirements seem to have the most consequence, particularly for Snell, FIM also
includes other requirements worth noticing: a shell penetration test and oblique impact tests which set limits on
rotational motion transfer to the test head form. The shell penetration test is comparable to tests in JIS and Snell
requirements but may present problems for some ECE R22-0s helmet configurations. The oblique impa et tests
do not appear at all in Snell and JIS standards and are distinctly different from the oblique impact option for the
tests of surface friction and projections in ECE R22-0s.

Whether these rotational tests pose any difficulties for current helmet configurations is uncertain. Most
methods intended to limit rotational motion transfer involve building some kind of tangential slip capability into
the helmet, either between the shell and the impact surface, between the shell and liner, between two liner
segments or between the liner and the wearer. The relative merits of these methods are unclear but their
incorporation into current Snell, JIS or ECE configurations might not necessarily affect weight, silhouette or
standards compliance significantly. For this reason, there may be little tension between FIM rotational
requirements and the demands of the prerequisite standards.

So long as rotational test demands are not a problem, some current ECE R22-05 homologated helmets may
already meet FRHPhe#O1 demands, particularly those which also comply with DOT or with JIS T8133:2015. DOT
and JIS both demand the same shell penetration test specified in FRHPhe#Ol and which is absent in ECE. Impact
energy management capabilities are likely to be better for those helmets which also meet JIS T8133:2015 and
worse for those without either DOT or JIS. M2020R configurations likely will have the greatest impact energy
management consistent with FRHPhe#O1.

If FRHPhe#02 is put into effect, extensive modifications are likely necessary for all current helmet configurations.

The Snell Memorial Foundation, Inc. is a not-for-profit organization dedicated to research, education, testing and development of helmet safety standards. Since its founding in 1957, Snell has been a leader in helmet safety in the United States and around the world.