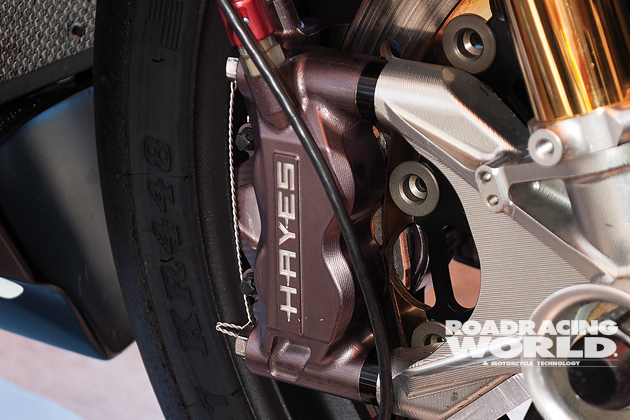 FEATURED IN THE FEBRUARY 2019 ISSUE OF ROADRACING WORLD…

When Hayes brake calipers showed up on the Scheibe Racing BMW S1000RR in the MotoAmerica paddock at the end of 2015, it appeared as though another brake manufacturer was joining the industry and using racing as a way to prove its products, but that was only partially correct.

Hayes, or Hayes Performance Systems, is not new to manufacturing motorcycle parts. In fact, Hayes has been manufacturing brake components—a lot of brake components—for the powersports industry for a long time, but not many people knew it. Now, thanks to some new products and marketing through racing, more people are about to know about Hayes.

“We were the sole brake supplier for Harley-Davidson from 1985 up until about 2006,” Philip Malliet, President and CEO of Hayes Performance Systems, told Roadracing World. “We literally have more brakes in service than the two names everyone talks about [Brembo and Nissin], but nobody knows we were making that product for Harley-Davidson. We actually had a relationship with Harley-Davidson all the way back to 1962.”

The story of Hayes Performance Systems goes back even further than that, as the company’s roots can be traced to 1946. HH Products, as it was known then, started out machining engine blocks for nearby Mercury Marine, before it started producing its own parts for agricultural machines and small engines. Then, after doing a one-off job making brakes for a go-kart, HH Products gradually switched over to making nothing but disc brake components …

–Hayes Performance Systems, by David Swarts, in the February 2019 Issue of Roadracing World

Read about the new kids in the field of motorcycle braking components — except the new kids have been around since the end of World War II! Associate Editor David Swarts takes an in-depth look at a company that built brakes for Harley-Davidson for decades, and how developing its products and expertise in the cauldron of motorcycle road racing has led to becoming an OEM supplier for the latest BMW S1000RR.