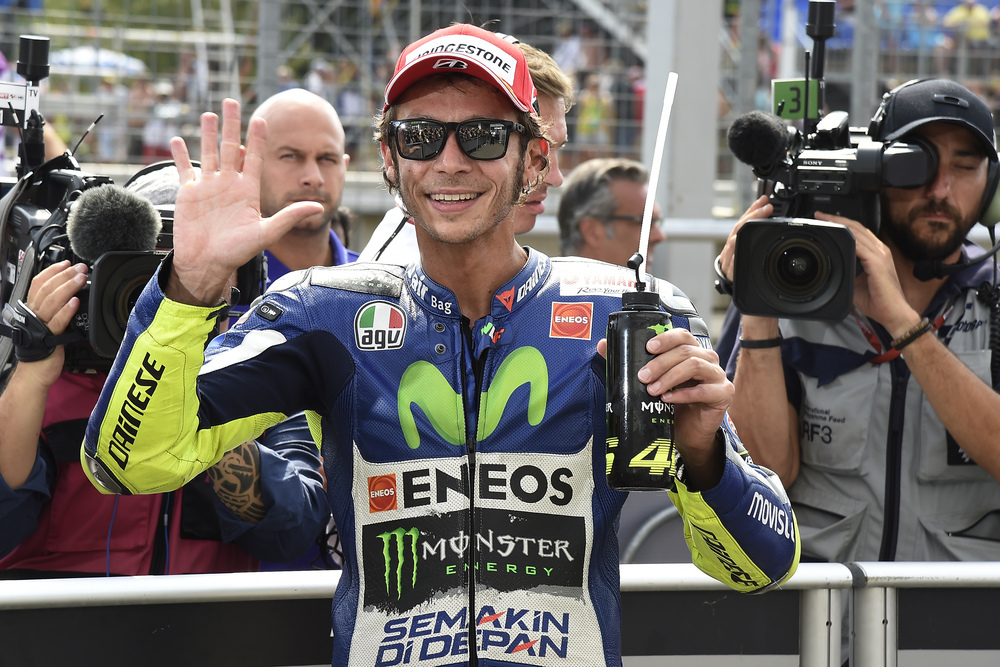 After securing a perfect victory in Brno a fortnight ago, Movistar Yamaha MotoGP is ready for another head-to-head at the British Grand Prix this weekend.

With a dominant victory at the Czech Grand Prix fresh in their memory, Movistar Yamaha MotoGP is eager to move on to the Octo British Grand Prix held this weekend at Silverstone.

The team arrives at the twelfth round feeling confident after two consecutive race weekends where riders Jorge Lorenzo and Valentino Rossi took two double podiums, making it a total of seven so far this season. Both riders looks forward to riding at Silverstone, which is another circuit with fast sweeping corners that‘s well suited to their YZR-M1s.

Lorenzo is greatly admired by the British crowd. He holds the record for the rider with the most MotoGP wins at Silverstone, since the British Grand Prix moved there five years ago. He secured three premier class victories in 2010, 2012 and 2013 and is eager to step on the top of the rostrum again this weekend to create a gap between him and his teammate as they are currently tied for the lead in the championship.

Teammate Rossi has also been a favourite among British fans for many years and his popularity is highlighted this weekend as he set to become an Honorary Member of the British Racing Drivers‘ Club (BRDC), arguably the most exclusive club in motor racing. Rossi is the first motorcycle rider to ever receive this honour and will be officially presented with his membership by BRDC President Derek Warwick.

To mark the special occasion, the nine-time World Champion is feeling extra motivated to win at Silverstone for the first time. He has been very successful on British soil in previous years, having secured three modern era premier class wins at Donington Park in 2002, 2004 and 2005 and two 500cc victories in 2000 and 2001.

Though Silverstone was only added to the MotoGP calendar in 2010, it has more than sixty years of history and is known as one of the most prestigious venues dedicated to motorsport. Thanks to innovations and investments the circuit became one of the fastest tracks on the calendar and earned high praise from the riders who enjoy the new layout and the cheering of the passionate British fans. Their enthusiasm for thrilling racing action gives the weekend an incredible atmosphere, making the British Grand Prix a must-be-at event.

I‘m quite happy after winning again in Brno. The last time I won there was in 2010, so I think it was also important for Yamaha to be back on the podium after five years. Now it‘s time to go to England and I love that place. Especially the track is a great opportunity for us; it has a nice layout where our Yamaha YZR-M1 always behaves in a perfect way. It‘s a very enjoyable track but also very demanding because it‘s long and has plenty of high speed corners and change of directions, so you need to be in a perfect shape to be able to fight for the podium. I won several races at Silverstone in the past and I feel good there so hopefully this season we can achieve another great result on British soil.

I‘m always very happy to go to England for the British Grand Prix in Silverstone. It is a race with so much history and the atmosphere is always very nice during this weekend. There are many racing fans and you can feel the passion of the crowd each time you move in the paddock. I really like this circuit, it’s very fast and technical. I have done good races at this track and I am happy that the next race will be at Silverstone. We are at a very important point of the season and I hope I can have a good race! We have to improve the set-up of the bike and get ready for the race on Sunday. Now that Jorge and I are level on points it will be very important to consistently be fast.

I am also very honoured to have been invited to become an Honorary Member of the British Racing Drivers‘ Club. I know it’s very difficult to become a member of this exclusive club, there are very selective criteria. There is no rider in the BRDC, I will be the first and for this I am even more honoured. I look forward to meeting the President, Derek Warwick, who I know and esteem for his career in Formula 1. I hope that I will have a good result at the Silverstone Grand Prix to honour my entry into the British Racing Drivers’ Club!

Silverstone is another race the team always enjoys going to, because the riders like the track and the British fans always give us a very warm reception. I have high expectations for this weekend and feel optimistic that we can get another good result, especially after securing two double podiums and a victory at the last two rounds. The morale of the team is high because Silverstone suits the YZR-M1 well. We have won a number of races there before and the riders are both in great physical scape. We intend to hit the ground running on Friday and be ready for Sunday early on in the race weekend. I look forward to a great show.